The LEGO Movie – which version to get?

The LEGO Movie has been finally released on DVD/Blu-Ray about a week ago, and it is available in several formats and carried by a bunch of retailers. If you haven’t gotten it yet, I highly recommend you do. You won’t be just owning an awesome and highly successful movie, but also a piece of history; this is the first full length feature-film released by LEGO, with a sequel already planned due to its amazing success. We have discussed and reviewed the movie several times (see links at the end of this post), but the point is that The LEGO Movie is a great piece of film with an engaging story, likable characters, funny jokes, and a surprisingly deep message that appeals to both kids and adults. 🙂

There are three versions of The LEGO Movie. The Everything is Awesome edition, which is the only one that includes the Vitruvius minifigure along with a Blu-ray, DVD, UltraViolet (digital copy) combo-pack, exclusive content, and bonus Blu-ray 3D for about $35 (depending on the retailer). Then there is the Blu-ray, DVD and UltraViolet combo-pack (without the Vitruvius minifigure) for about $25. The third option is the simple DVD, UltraViolet combo-pack with no extras for around $15. 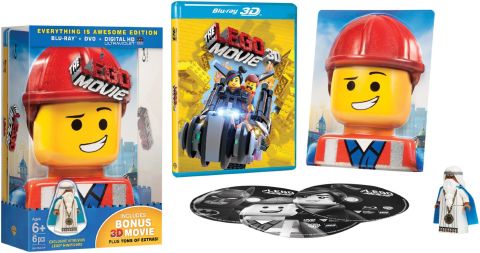 If you would like to pick up the movie locally Wal-Mart, Target, K-Mart and Best Buy all carry them. If you prefer to shop online, besides the websites of the above retailers, you can also get the movie on Amazon

. Amazon also has a rent version – I don’t think it’s worth it, I rather own the movie for a bit more, but I thought to mention it just in case you are interested. Here are the versions available on Amazon:

As far as which version of The LEGO Movie to get, I would say that if money is not an issue the Everything is Awesome combo is really the best option. As I mentioned above, you are not just owning a movie, but a piece of history, plus you will get the exclusive Vitruvius minifigure. On the other hand, for some people $35 is a lot of money. If you would still like to get all the extras, but don’t care about the minifigure, you might consider selling Vitruvius and basically get the combo for half price (right now Vitruvius goes for about $15-$20 on the secondary market – see on eBay

, see on BrickLink). Even with selling Vitruvius, you would end up owning more than going for the second choice for $25 – just something to keep in mind. If you are strapped for cash, or don’t need all the fancy extras, you can go for the cheapest version, or wait a bit to see if prices come down on the more expensive options. But that requires some serious patience… 🙄

What do you think? If you have gotten The LEGO Movie already, which version would you recommend to those who are still deciding on which would be best for them? Feel free to share in the comment section below! 😉