The latest MMO (Massively Multiplayer Online) game from LEGO is called LEGO Minifigures Online. I’ve been playing the open beta version for a while, so I decided to write a review to give you some idea about the game in case you haven’t tried it out yet. SPOILER ALERT: I’m including some aspects of the game in this review that aren’t exactly top secret, but are not yet publicized. I have also checked and made sure that I’m not breaking any non-disclosure agreements in regards to the game. So let’s begin! 🙂

In the LEGO Minifigures Online game Series 12 Minifigures represents each world, and the Video Game Guy represents the whole game. When you begin the game, you select your basic minifigure pack. You then enter a preliminary training world. At the end of training the Video Game Guy tells you that the other minifigs have gone missing, and you travel to Pirate World to find them.

➡ LEGO MINIFIGURES ONLINE – PIRATE WORLD: In Pirate World, you meet Captain Pete on the Isle of Yarr. He tells you to meet him in Pirate Town, so you travel there. Across the island you fight monkeys, redcoats, tribal villagers, and finally ghost pirates. In about the middle of the island, you meet Dreadleg, a former first mate who got cursed. His curse is actually what causes so many enemies to turn into ghost pirates. 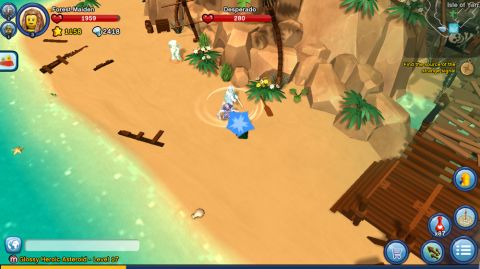 After you make it to Pirate Town, you take the pirate trials, and then you have to fight Captain Pete in a “friendly duel”. After you defeat him, you earn a spot in his crew. A little later you travel to Volcano Island. Volcano Island is much the same as the Isle of Yarr, but harder. When you reach the volcano, everything changes. You start to fight more powerful (but less intelligent) skeleton pirates and fire beasts. 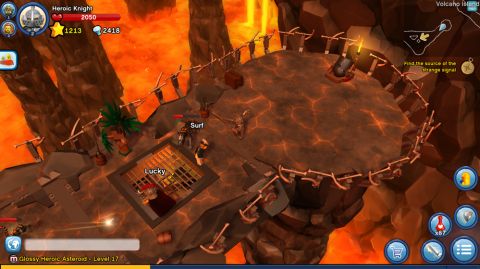 At the end of the volcano, you fight Dreadleg himself. I’m not going to spoil how to beat him, but it is fairly easy on the second or third try. After you defeat Dreadleg, Video Game Guy, Captain Pete, and the Buccaneer all congratulate you. But it is not over yet!

➡ LEGO MINIFIGURES ONLINE – MEDIEVAL WORLD: The storyline in this world is very different from that of the Pirate World. The Jester has stolen the King’s crown, and the Wizard has commissioned you to chase him. Elementius Pieromancer (the badguy who is wanted for throwing pies and using illegal magic) has raised an army of gremlins, trolls, and ogres who are putting siege to the city. 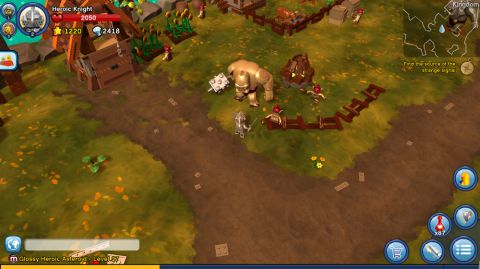 You have to fight your way out of the city and through the wilderness to find the fortress where the Jester is, and defeat him. It turns out that he was working for the Pieromancer, who is going to use the crown to cast a spell to rule Medieval World! After he is defeated, the Jester asks for forgiveness and you go out to find and fight the Pieromancer. You have to travel through a troll camp, then the Dark Forest, and then the Enchanted Forest. 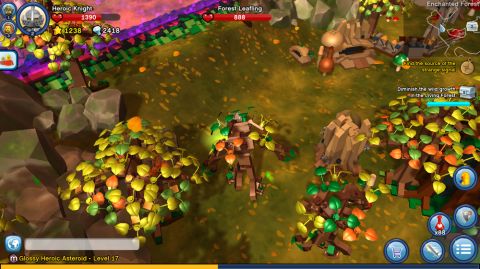 In the Enchanted Forest, you meet the Faerie Queen, who has you collect crystals to help her cast spells. She gives you protective magic (don’t get your hopes up, it does not raise your character’s defense levels) and allows you throw the barrier separating the Corrupt Forest from hers. The Corrupt forest, (which actually resembles a desert) is full of danger such as normal spiders, giant spiders, evil mushrooms, and I forget what else. You follow the road through all of that and then you reach the troll bogs. You can walk through the water, but this water slowly takes your health. The bogs are crammed with trolls, archers, foot soldiers, heavy soldiers, and mages. At the very end of the swamp, you reach the castle door of the Pieromancer. Inside the castle you fight literally hundreds of assorted trolls, gremlins, mages, ogres, baby dragons, catapults, and magical stones. At the end of the hallways, flaming staircases, laser shooting hallways, hallways full of dragons, and rooms, you reach an empty stretch, and then the Pieromancer’s study. He summons lots of berserk soldiers and throws flaming pies at you. After you defeat him, you begin to expect that it is not over.

➡ LEGO MINIFIGURES ONLINE – SPACE WORLD: The Video Game Guy does not have any more distress calls, but suddenly the Space Miner sends a hologram asking for help in the space colony. You take a portal there, and you arrive on a space-station. The Space Marines are just leaving to go fight the enemy, who are called “Shadow Centurions”. Storyline aside for a moment, it is interesting how the planets are created. There are various floating environments, each one with rocket-pads to boing you from one planet to the next. Anyway, you fight the Shadow Centurions, which look kind of like Blacktron II… mech soldiers? (Sorry, I don’t have a screenshot.) There are also a couple alien bugoids – based on mantises instead of mosquitoes – who live in a artificial bio-dome. You cross various planets, until you reach the Space Police Headquarters. It has been ransacked by enemy soldiers, and the commander is at the back. At the end you have to fight an enormous artillery drone, equipped with missiles, a Gatling-gun, and huge slammer. After he is defeated, you leave the recaptured base and travel to the crystal mines. It takes a long time to travel through them, but once you make it, you join the Space Marines. With their backup (yes, you can actually have a squad of Space Marines follow you around and fight enemies) you take back a spaceport, and teleport to the something-or-other advanced research outpost. There is nothing there, and the alien world is nearby, so you travel there. You fight more mantises, normal aliens, little bugs, and gun shooting plants. Then comes the temple. 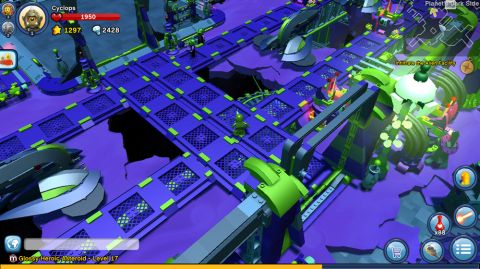 This is as far as I got in the game, so I can’t tell you what comes next, but I think the end boss is the Alien Villainess. After this world comes Greek World, with the War Goddess as the minifigure and I think Hades as the big boss. That’s all that is known at this point, because that world is still closed. You can play the game here: LEGO Minifigures Online website, and also watch the video-review below for further details.

So what do you think? Have you played the LEGO Minifigures Online game yet? How do you like it? Did you find this review helpful? Anything else you would like to know? Feel free to share your thoughts and questions in the comments section below! 😉

You can also visit the LEGO Games section, or select from the following related posts: