If you like to read LEGO related articles in a magazine format, you might want to check out HispaBrick Magazine. The magazine is written by members of the LEGO fan community in Spain, and published three times a year; April, August and December. It is available both in English and Spanish as a free download, with a printed version as an option. The 20th issue was just released at the beginning of this month. Below is a bit more information about the magazine in case you are interested. 🙂

From the magazine’s website: “HispaBrick Magazine started in 2008 as an initiative of some Spanish AFOLs in order to preserve the best MOCs and articles that were published in their community for ‘posterity’. In addition to the warm welcome from Spanish speaking AFOLs, it soon became clear that there was much interest from people who did not read that language. The second edition of the magazine already contained a number of articles in both Spanish and English and as of issue 003, HispaBrick Magazine has been published in two editions of identical content, one in Spanish and one in English. As the interest in the magazine has grown, so has the group of people who are directly involved in the project. What started out as a small local effort has transformed into a magazine with an international readership around which a community has grown.” 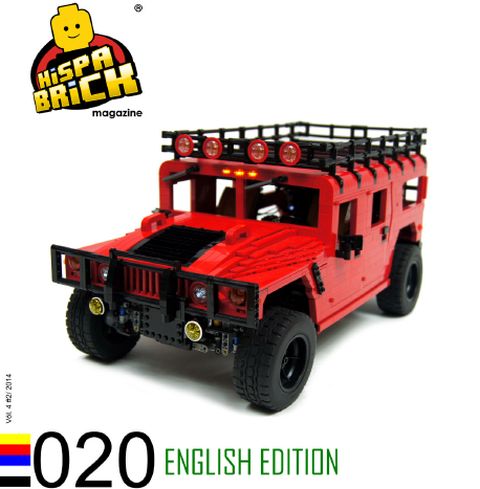 Each issue of HispaBrick Magazine is full of interesting articles and is over 100 pages long. Topics include reports on LEGO fan community related news and events, featured LEGO creations, LEGO set and LEGO related book reviews, tutorials, building instructions, inspirations, question and answer sessions with prominent LEGO fans as well as LEGO employees, and a lot more. For example, below is some information about the latest issue:

“In this issue, Keith David Severson, Senior Manager for the CEE Team explains the restructuring and the future of the new ambassador program. We will tell you about the new project if the CEE Team, The LEGO Ecosystem, which Yun Mi Antorini has carried out.

We will tell you the story of Fairy Bricks and their work helping sick children in hospitals, and about SUR M´ALE GOBROS and their peculiar graphical creations. Great creators like Sariel, Evan Bordessa, Dviddy, Rhymes_Shelter, Arkov or Retinence show us their creations. Bright Bricks, famous for their replica of a Rolls Royce turbine tell us more about their company and show us some of their other creations.

Our collaborators keep offering tutorials on MINDSTORMS and WeDO, reviews of the latest sets and books, we cross the Atlantic to learn more about Chile LUG, MINILAND characters, an exhibition in Mungia, useful objects made with objects LEGO and much more…

We take this opportunity to let you know we are preparing the celebration of our annual event, the HispaBrick Magazine Event 2014, which will take place on December 6 and 7, 2014 at the mNACTEC museum in Terrassa (Barcelona). In the coming weeks we will provide more detailed information regarding registration, dates and times on our website. You are invited to participate.”

So what do you think? Are you familiar with HispaBrick Magazine? Or is this the first time you heard about it? If you have read some of the issues already, how did you like them? Are you looking forward to future releases? Feel free to share your thoughts in the comment section below! 😉