The long awaited first 2014 LEGO Ideas review results are finally here! I’m not sure what took so long, but as the saying goes; good things take time. As you probably know already, LEGO Ideas is a platform where LEGO fans can submit their own LEGO projects for consideration as a future LEGO set. Projects need to acquire 10,000 public votes within a year to be eligible for a review by LEGO’s own team. If they think a project is a good fit for LEGO, it will get approved and  released as an official LEGO set. 🙂 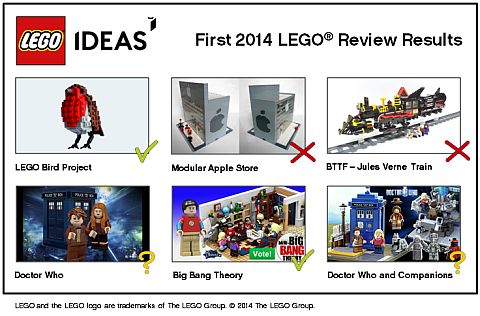 A surprising twist of this review period is that not one, but two projects got approved, with the very likely possibility of a third one that is still under final consideration (which seems to indicate that LEGO is still working on acquiring the license to produce the set). There were six LEGO projects that reached 10,000 supporters between January and June and qualified for this review. And to have half of them approved (I’m pretty sure one of the LEGO Doctor Who projects will be approved too) is super awesome, and is a great testimony of a company working together with its fans.

The first project that was approved is the LEGO Ideas Bird Project. It is the 9th set that came out of the LEGO Ideas (formerly LEGO CUUSOO) platform. This is what the LEGO Ideas team says about it on their blog: “A huge congratulations goes to LEGO Ideas member DeTomaso, a gardener, who designed these exquisite models to teach children and adults about birds. We’re happy to announce his mission will be accomplished through his beautiful LEGO Birds when his becomes the next LEGO Ideas set.”

Although some people feel this project is kind of boring, I think it has a huge potential to become a very popular set, and I wouldn’t be surprised if LEGO continues with similar sets in the future. First of all the birds are cute, and provide an interesting building experience. I’m pretty sure it will come with a booklet that talks about each bird, so there is educational value there as well. I can see this set being popular with adult LEGO collectors, bird-watchers, parents who like to give their children educational toys, and even with schools and libraries for their programs.

The second project (10th LEGO Ideas set) that was approved this time is the LEGO Ideas The Big Bang Theory. An interesting feature of this set is that it was designed by the same LEGO fan who created the highly popular #21110 LEGO Ideas Research Institute. Good for her! This is what the LEGO Ideas team says about this set on their blog: “This LEGO set will be a true match made in scientific heaven (well, actually in acrylonitrile butadiene styrene), because the brilliant characters in this popular American TV show appreciate LEGO bricks, and LEGO Ideas members Alatariel and collaborator GlenBricker (plus their 10,000 supporters) love both LEGO bricks AND The Big Bang Theory show! A huge congrats to Alatariel and GlenBricker!” 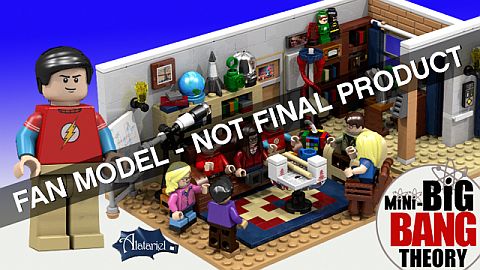 Personally I don’t watch the Big Bang Theory, but I like the look of this set for the various geeky accessories. As far as the reaction of LEGO fans in general, I have heard/read everything from great excitement to utter shock – very similar to the reaction to LEGO taking up The Simpsons license. While the show may not be kid-friendly, I believe what LEGO is going for here is the geeky goodness that they can create with this set. Although they could have done that in a regular set without having to get tied in with a sitcom. What do you think? I would love to hear your opinion on this.

This review period also featured two LEGO Doctor Who concepts, and the LEGO review team is still evaluating them. As I have mentioned above, I’m almost certain that Doctor Who is going to be made into a LEGO set an they are just ironing out the last details. The fact that two project made it to 10,000 votes at the same time indicates the huge appeal of this set – in fact I wouldn’t be surprised if after the initial LEGO Ideas set there will be others in the future (like LEGO has done with Minecraft, which also originally was a LEGO Ideas project). 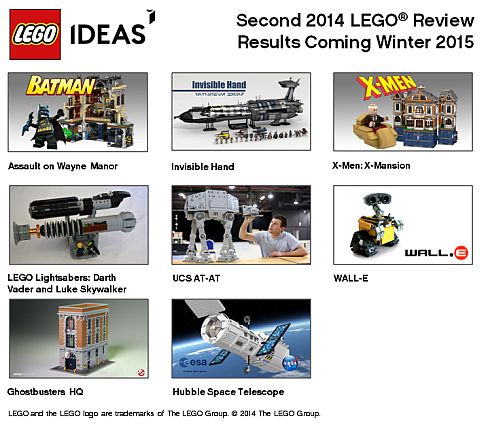 The other two projects from this review period are not going to be produced as a LEGO set. This in no way means that the projects are not awesome, it is just that LEGO didn’t feel they were a good fit for them at this time. In the meantime, the second 2014 LEGO review is also in full swing, and we can expect results late January 2015. There are eight projects that qualified for that review period. My bet is on the LEGO WALL-E and the LEGO Hubble Space Telescope. And while we wait for the results, you can also check out the current LEGO Ideas sets at the Online LEGO Shop.

So what do you think? How do you like the projects that have been approved as official LEGO sets? Are you planning to get either or both of them? And do you think Doctor Who will be approved as well? And which project would you like to see approved from the second review period? Feel free to share your thoughts and discuss in the comment section below! 😉