LEGO Interview on The Collector’s Show

Recently I had the opportunity to represent theBrickBlogger on a web-based radio program called The Collector. The interview was facilitated by Harold Nicoll, The Collector himself. It was a fun and interesting experience, so in this behind-the-scenes look I’ll talk about how the whole process worked. It may not be something you’ll need to know in your own personal life, but you might still find it interesting. And who knows? You may be doing an interview yourself some day! 🙂

Another topic I will cover here is some of the missed questions. Before the interview Harold sent over a list of questions that would help keep the conversation on track, but we didn’t have time to go over it all. However they were still interesting enough that I thought to share them with you here. Time flies when you’re having fun!

As far as theBrickBlogger goes, everything comes straight through our admin. Not only is she monitoring the site to keep our standards up and be a family friendly environment, but she handles scheduling of articles, editing, processing news, and processing the numerous requests that come to the site. When a request like an interview comes to her attention, she first needs to vet the source. This includes how that entity conducts themselves in terms of content, as well as validate the source in terms of size and activity level. Next, she has to figure out whether or not the request is within the abilities of theBrickBlogger. At the time of this interview allergies made it impossible for admin to handle the interview herself, but fortunately I was available. Combine this with my podcasting experience and it was a good fit.

So now the ball was in my court. Harold got in contact with me directly. We had to figure out a time to have the interview as it was going to be over the phone, which meant we had the added challenge of dealing with time-zone differences. Once that was done, it was time for Harold to send me a rough script. This is more of an outline for introducing the topic and me, and a list of questions he planned to ask. With this comes a note that many times, as the interview goes on, he might find a particular point interesting and ask a follow up that is not on the script. With script in hand, I had time to do any research I might needed for the interview, as well as touch basis with admin for any points that needed clarifying. This last point was important since I was representing theBrickBlogger in this interview. Then, it was just waiting for the call… you can listen to the full interview at the following link. It starts with some unrelated collector subjects, and our interview begins at 12:35 (if you like you can forward to that point) and goes on for about 30 minutes. Here is the link: The Collector’s Show – Collecting LEGO Interview, and you can also listen to it below. Again, my part of the interview starts at 12:35, so you may want to forward to that section.

Surprisingly, we did get through a lot of the questions that were planned. Some were slightly altered but most were present as they were in the script. However, there was one question in particular that I thought would be fun to answer. It was about the LEGO sets that were listed on theBrickBlogger as retiring soon, and whether this meant they were the best to collect. Since the show is called The Collector I was a little sad we didn’t get to touch upon this point. Thankfully I can talk about it here, so here it goes…

Essentially, a discontinued LEGO set has the potential of being a collector’s item, but it doesn’t necessarily mean it will be. Sure, LEGO holds its value and there seems to always be a mark-up for any set that is discontinued, but the real crux of the matter comes to whether or not it is a good collector’s item. That is a very different bit of criteria to consider. If you want to be a collector, chances are you are guided by two main principles. First, do you like what you collect? Second, does it hold value for others? Between these two major areas is where you find a collectible. 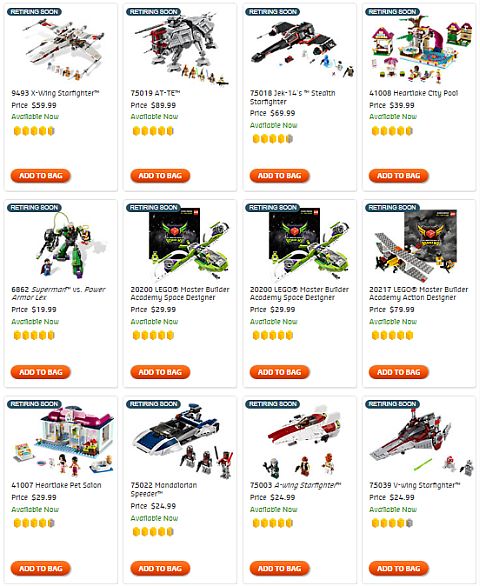 A discontinued LEGO set may not fall under either one of these two areas. Say, for example, a LEGO City Police helicopter. LEGO always releases new LEGO City Police sets, and likely there will always be a helicopter in the line. So while a set becomes retired it doesn’t mean it will be a great collectible. So what’s the point of keeping track of discontinued LEGO sets? Well, some of them are indeed great collector’s items (like for example the LEGO Modular Houses and other LEGO Exclusives), so knowing ahead of time when they will be retired gives you great advantage. For builders, this means that a particular arrangement of pieces will not be easy to get any more, so it’s best to stock up on them before they get retired. For resellers, keeping track of retiring soon LEGO sets means they know ahead of time which sets will be increasing in value in the near future. And for LEGO fans in general it is an indication that shelf-space is being cleared to make room for new stuff.

So what can we learn from an experience like being interviewed about a hobby? Well for one, getting to talk LEGO to someone who is not in the hobby is all about timing. You’d be surprised how many opportunities are actually available for speaking in public. Not too long ago, a fellow LEGO User Group member was asked to speak at a college for a Recreation & Leisure course. Having an audience willing to listen is always a better experience than trying to forcibly bring up the topic in mixed company. A receptive audience might even result in new fans joining the hobby.

Another point is to have an outline when you speak. This doesn’t need to be fancy or greatly detailed by any means. A handful of questions is probably all most of us need to talk LEGO. The reason why having an outline is such a good idea is because it prevents us from rambling. Sometimes our love of the hobby gets in the way of talking about it. There are just too many things we want to cover and can’t because of time. Allowing for a small bit of organization will let your ideas come across more fluidly and keep you from getting a bit too obscure in the minor details.

➡ LEGO INTERVIEW – WHAT I DIDN’T SAY

Talking formally about LEGO is a very different story than a personal conversation. I want to make this point because there were a number of things I didn’t say during the interview. Most of these topics had more to do with my personal opinions. One such opinion has to do with me being a “purist”. We got into the concept of counterfeit LEGO, and as much as I am about keeping my collection all official, I didn’t want to couch my terms as a discussion of counterfeiting. Harold still called it counterfeiting, but I wanted to point out in the interview that many small businesses make compatible pieces that aren’t copying LEGO’s own, but rather make something original and expand on the hobby.

I also didn’t want to monopolize the interview with my own preferences. Again, specifics are great for examples, but generalities are better suited for an entry-level interview. This helped me from excluding anyone that might find it interesting. An example of this is when Harold asked “Where does one start?” I didn’t go into how well you can build or how much money you have to spend. Instead I turned the question around and said “What do you like?” As we all know, LEGO has the ability to be virtually anything we can imagine. So I turned a very specific topic into a general one.

Hopefully you have a chance to listen to the interview (here is the link again, or you can use the player above to listen) and maybe you’ll find something interesting in it. My question to you is, have you talked to a group of non-LEGO fans about your own LEGO hobby? How was your experience? Did you learn something interesting during the process? Feel free to share in the comment section below! 😉