The LEGO Ninjago TV show had a long hiatus with no new episodes since July, but finally the last two episodes of Ninjago Rebooted will be airing back-to-back tonight on Cartoon Network! 🙂

➡ LEGO NINJAGO EPISODE 33 – THE VOID: In this episode the Ninja have to quickly adapt to space as they race the Nindroids to retrieve the Golden Weapons of Spinjitzu. But getting to space is one thing, getting safely back home is a whole other problem. Will the Ninja be able to deal with such unfamiliar circumstances? Below is a teaser-trailer for the episode.

➡ LEGO NINJAGO EPISODE 34 – THE TITANIUM NINJA: In this episode the Nindroids make it back to New Ninjago City with the golden weapons, and it’s a matter of time before the Overlord uses them to become the Golden Master and seize New Ninjago City’s control and power. Luckily, the Ninja find a way back home from Comet Arcturus, just in time to face the Overlord. Unfortunately, one Ninja must make the ultimate sacrifice in order to save Ninjago and become “The Titanium Ninja”. Below is a teaser-trailer for the episode. 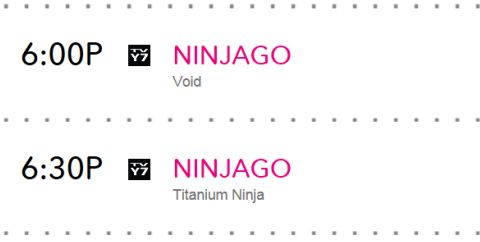 Also, you probably know already that Ninjago will continue in 2015 with a new season titled LEGO Ninjago Return of an Ancient Evil. It will premiere on January 18, 2015. The villains being Stone Cultists including a stone Pythor. And the Ninja will be joined by another female character in orange ninja suit, named Skylar. The season will revolve around the Ninja discovering they are not the only ones with elemental powers. We have previously discussed the 2015 LEGO Ninjago sets coming (see: LEGO Ninjago 2015 Sets Pictures & More!), and you can also check out the currently available LEGO Ninjago selection at the Online LEGO Shop.

So what do you think? Did you like this season of the Ninjago TV show? Are you looking forward to the last two episodes tonight? And what do you think of the new season coming next year? Feel free to share your thoughts and discuss in the comment section below! 😉