In this Brick Breakdown series I review official LEGO sets, from the perspective of looking at interesting building techniques we can all learn from. Today we will be looking at the #21117 LEGO Minecraft The Ender Dragon. You can also check out the previously discussed LEGO techniques found in official LEGO sets at the end of this article. 🙂 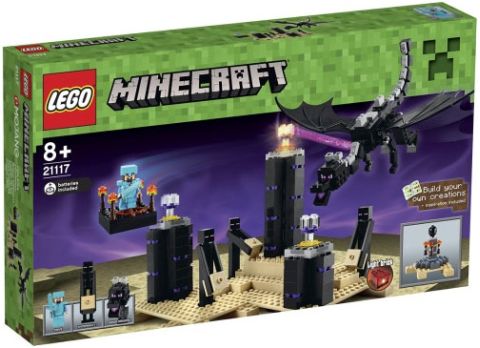 Having played the addictive game of Minecraft, I was excited when the LEGO Minecraft Microworld sets were released. However the original LEGO Minecraft sets are only miniature versions of the Minecraft landscape, and I always felt it was a shame not to have LEGO sets in regular minifigure scale. Thankfully, LEGO realized the potential and we now have a full-sized line of our hero Steve and the hazards he must face.

We have talked about the new line of minifig-size LEGO Minecraft sets in previous previews and reviews (see: Minifig-Scale LEGO Minecraft Sets Review, and New LEGO Minecraft Sets Now Available!), but I also wanted to do a Brick Breakdown on them. From the six new sets the one that caught my attention the most was the #21117 LEGO Minecraft The Ender Dragon, so this is what I decided to assemble first. Boy, were there a lot of basic bricks in this set! But it makes perfect sense when you consider what the game looks like. The real question though was, “Are there any cool techniques to learn from the set?” Well, let’s find out…

It’s a well-known fact that gravity works, but sometimes we try to build a LEGO creation that defies it to make something impressive. However most of the time gravity actually helps to create something cool. For example, in some of my own builds I’ve used gravity to make sure something hangs correctly and can swing freely. In the LEGO Minecraft The Ender Dragon set this idea is taken one step further by adding in a seesaw device right in the middle of the dragon’s body. 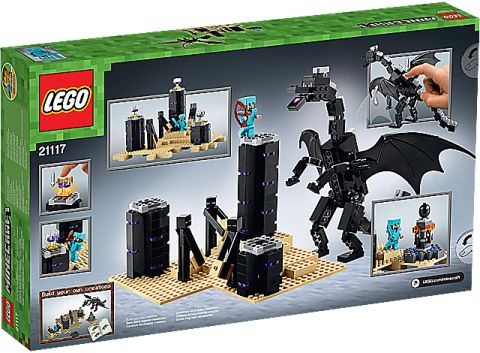 It’s obvious that if you hang a large wing on one side of the seesaw and nothing on the other, the wing will be heavier. Now place this empty side in the middle of a closed area and build a small box that can push it down. The end result is a slick push-button mechanism that gives the wings a flapping action (see video below). It is kind of hard to reconcile how cool this mechanism works with how simple it is to make. With just a little creativity, this concept can be applied to a wide range of LEGO creations. However, you have to remember how gravity works; turn the dragon upside down and the whole process is ruined.

The button in the above mentioned gravity mechanism is amazing, so I wasn’t expecting to see another connectionless design in the same set. Nevertheless, the crystals at the top of each pillar are not fastened to anything. The idea is that the crystal will glow when the dragon is near, however light-up bricks can get pricey. So LEGO gives you only one pillar that can light up, but this makes the other pillars rather dull. However if you don’t connect any of them, then it becomes a simple task to swap them around. 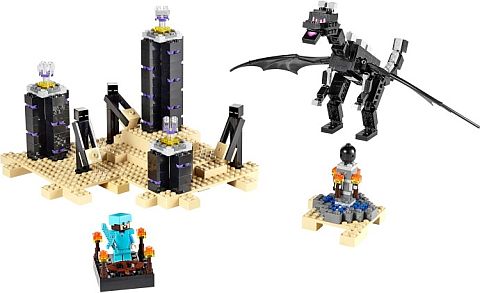 The key to this design is the ability to create a shaft system. Essentially instead of using a stud and tube system to securely connect things, you are enlarging the entire process and treating the elements like a peg and hole system. This is of course not the only way to have a connectionless design; just look at the button on the dragon’s back we talked about before. In that design it is about filling up the space and adding something like the modified plate with hook to prevent the free-floating element from falling out. Whereas here we have a locked version of the connectionless design, which works great for elements that may not have the luxury of always being upright – like a sliding door/rail or something that hangs.

If you do plan to experiment with a gravity mechanism, it is important to know where to make certain elements of the mechanism to stop. Generally the goal is to control the movement to create a specific outcome. If you fail to limit some of the movement, it may cause problems in the design later. A good example of this is the wings on the dragon – they do not have full range of movement. As for a connectionless design, it often depends on what you want that design to accomplish. If you are looking for something that swaps out easy and your creation is always upright, then creating a shaft system may work best. However if you are planning something really involved, you will likely need more planning; understand how much space is used and how to use this knowledge to lock your elements in a certain configuration.

So what do you think? How do you like the new LEGO Minecraft sets? Have you had a chance to build any of them? Did you learn from the interesting building techniques used in the LEGO Minecraft Ended Dragon set? Feel free to share your own experiences and tips, or ask questions in the comment section below! 😉

Next post: Make your own LEGO holiday greeting card!