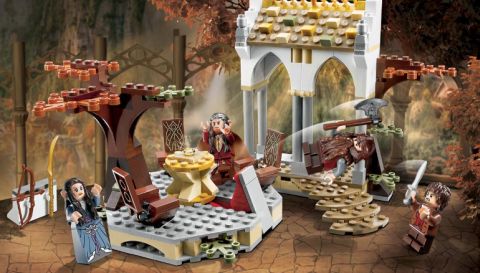 Probably one of the biggest draw of the LEGO Lord of the Rings Council of Elrond set is the two Elven minifigures. Elrond and Arwen are fancy beyond compare, even when matched up with other Lord of the Rings minifigures. However that is not all; the set itself has surprising depth. At first glance there does not look to be a whole lot to it – this impression most likely coming from the set’s very open design. And although The Council of Elrond may not have the same size as equivalently priced sets, many of the elements included are in rare colors or are solidly worked into the set’s design. No matter how you look at it, the value is there, but let’s look at the unique techniques used. 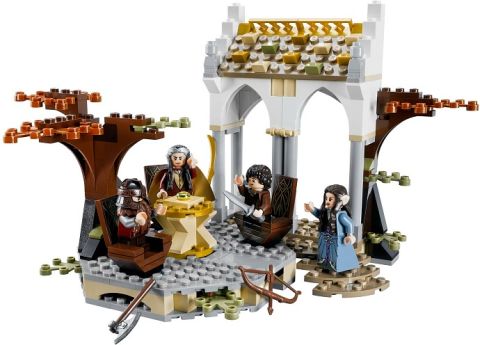 This technique was actually a surprise to me. Back when I talked about the LEGO Super Heroes Arkham Asylum Breakout set (link at the end of this post), I was expecting to really get into Gothic architecture, however I ended up with a lesson on Romanesque. Now in a much smaller set we actually get Gothic architecture. As the set is quite small it only hints at Gothic architecture, but it does so in a very strong way. We can only imagine what it would be like to build a whole city in this style! 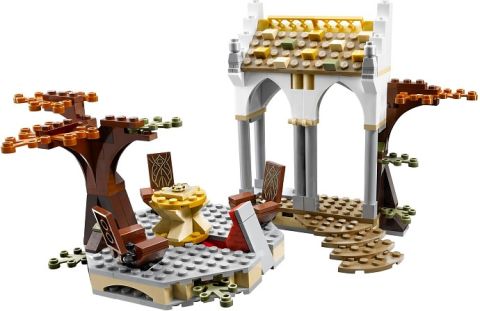 To get into details, Gothic architecture is represented in three ways in the LEGO Council of Elrond set, all of which are standart elements that classify something as being Gothic. First, there are the pointed arches. The Council of Elrond has two in the front, and they definitely fit the bill. Second, it has a ribbed ceiling. Turn the model around and you see one massive arch that is inside the building. This clearly indicates a ribbed design which matches the style. Finally, there are the flying buttresses. A typical flying buttress is a structure that leans out from the roof. At times these structures contain statuary. This set does have a couple of statues on the roof which could loosely be interpreted as the start of small flying buttresses. The problem is that a flying buttress would more likely appear much higher up on a building and this set doesn’t go that high. However, given the appearance of the statues and how they are placed, it’s reasonable to assume larger instances could be part of an extended design.

All in all, the LEGO Council of Elrond is a nice example of the Gothic style, albeit small. The important thing is that its major characteristics are obviously present and create a distinct, yet familiar look. Plus now we have the pieces needed to experiment with this iconic style of architecture.

Over the years LEGO has made numerous sets with platforms. These are often made to look like a dais with something important placed on it. In the LEGO Council of Elrond set this platform contains a fancy table that holds the “Ring of Power”. Many times when a LEGO platform is built, there is a standard thickness used; five plates, or two plates and one brick (same idea). The reason for this measurement is two-fold. The first has to do with having enough space for a mechanism. The second deals with being able to create interesting details. 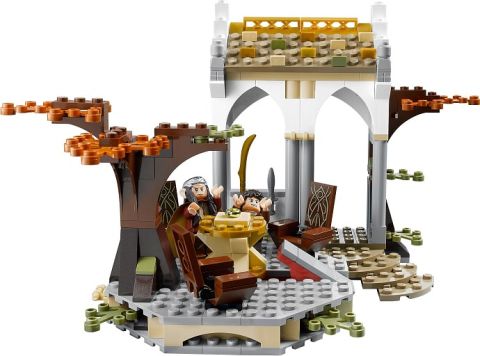 Let’s look at the mechanism side of things. Some of the most basic designs require roughly a brick’s worth of space. Since this allows for the stacking of three plates there is more than enough room to give a mechanism rails, stops, handles, etc. This still leaves two plates of space. One of these is typically left for room so nothing catches, and the final plate of space is used to cover up the mechanism. Take the catapult action in this set. The sliding slope with the evil eye is a brick thick and contains a handle and rails. This connects in with a hinge and slope element that is also a brick thick. On top of the hinge is the covering tile which is a plate thick and below is an empty space that is a plate thick to allow the hinge to move. Put it all together and you see how there is just enough space to make everything seamless.

The other reason for the five plate thickness is detailing. In the LEGO Council of Elrond this is demonstrated with an arch, small leaves, and most importantly steps. This particular measurement allows for some high level detail that does not look rushed or off-balancing to the rest of the model.

Choosing and using a style of architecture can take a lot of work with LEGO. However, the reward is definitely satisfying. By using these real-life techniques, you manage to give your creation character and depth through its relationship with that architectural time period. Granted, the process can require a higher degree of work on your part, but it will be something that sets you apart as an accomplished designer.

Platforms, on the other hand, are great for not only building up your model, but allows nice opportunities for more specialized uses. It does not matter if you are after a bit more detail or you just need some room to hide a clever action element, platforms make a perfect solution for a relatively simple task. 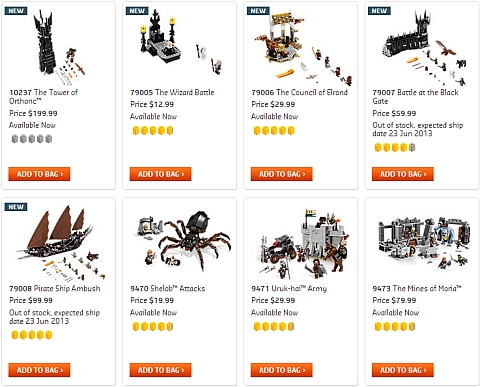