While shopping for LEGO at various retailers you may have run into a brand called LASER PEGS. They are usually placed in the same isle as LEGO, or somewhere close by. You will noticed on the boxes that the elements look very similar to LEGO (same size bricks, knobs on top, etc.), but the pieces are all translucent and the whole kit lights up. So how does this brand compares to LEGO? And can LEGO fans get anything out of LASER PEGS to enhance their LEGO creations? Below I will show you some of the LASER PEGS sets I tried out and what I think of them, so if you have been considering checking out this brand, follow along. 🙂 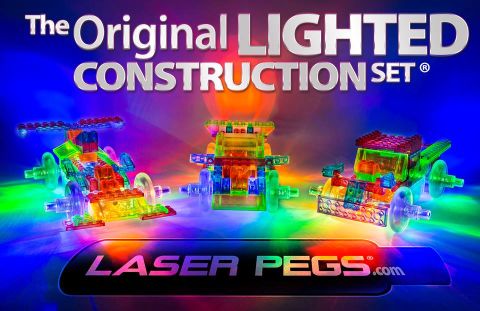 LASER PEGS advertises itself as The Ultimate Construction Toy For Kids. The sets come in sleek black boxes with an image of the sets themselves. Each set comes with instructions for several models. In all of LASER PEGS sets the included construction elements look exactly the same as regular LEGO pieces; bricks, plates, slopes, wheels, etc. However all of the elements are translucent; either clear, or some other tinted translucent color like yellow, orange, red, purple, blue and green. The reasons for the translucent elements is to make sure that the light can shine through each of the pieces.

Besides the regular construction elements each set contains a power-base. This is a special part that includes batteries, or connects with an AC-adapter to a regular wall-outlet. Some of the power bases are large, and you can either build on top of them like on a base, or just use them as a remote control for your creation. A couple of these large bases also have wheels attached so you can use them as the body of a vehicle. There are also smaller power bases called Mobile Power Source. These can only operate with batteries, but can be full encased into a LEGO creation as they are quite small (about the size of a 2×6 brick). 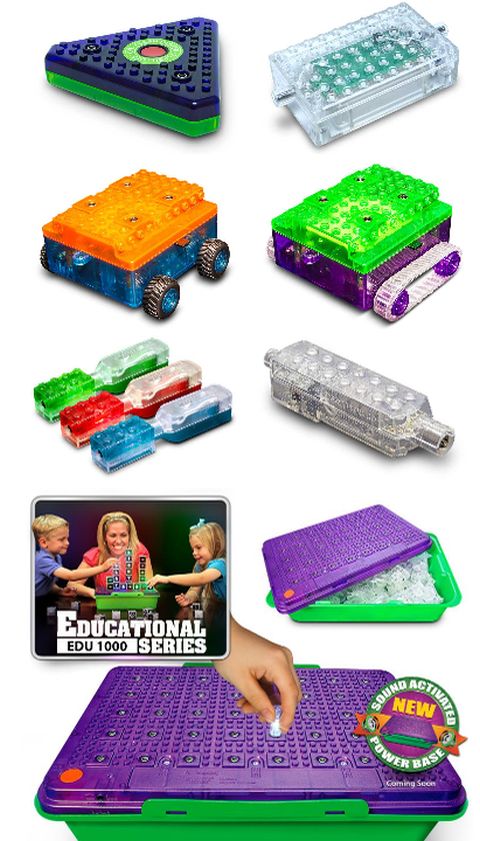 No matter which power-base you use, you will be connecting it to what the company calls “Laser Pegs”. These are special parts with a LED inside, and they can also be connected to other Laser Pegs to create a chain of elements that all light up. Some of the Laser Pegs are shaped like a 2×4 brick with studs, and others are like tubes or pipes to create curved and angled connections (these don’t have studs). You can basically create a daisy-chain of Laser Pegs and surround them with regular construction elements. 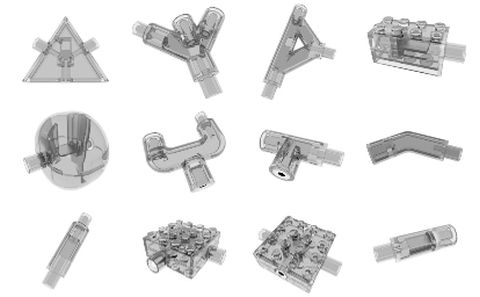 LASER PEGS has a whole range of sets – mostly various vehicles and critters and some educational sets. They also have officially licensed National Geographic kits, and Major League Baseball model kits. Each set includes instructions for one model and alternate instructions can be downloaded from their website. And of course, just like with LEGO bricks, you can build from your own imagination. Even the smallest sets include enough parts to build alternate models and you can also mix them with LEGO elements. 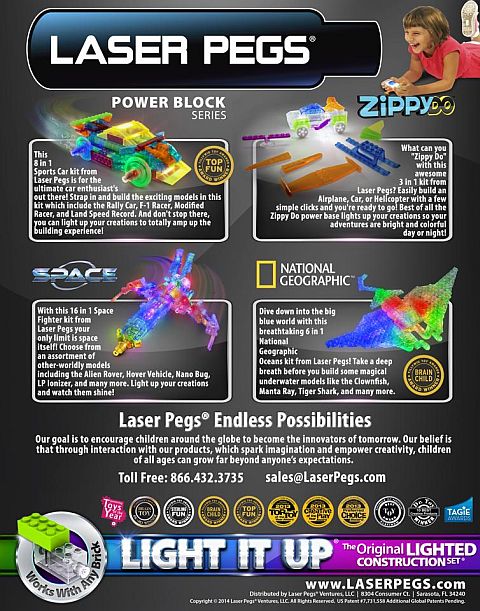 As far as the quality of the sets, the boxes do look really good on the outside; nice, modern, colorful design on a sleek dark-gray/black background. The inside of the box unfortunately screams “Made in China”. The plastic bags the parts are secured in are ugly, and the instructions look exactly like the ones you receive with inexpensive assemble-it-yourself furniture; cheap foldout paper with poor quality gray/black printing and tiny text. For the smaller sets this is not such a big problem as there aren’t very many steps, but for the larger ones it is literally a pain in the neck. 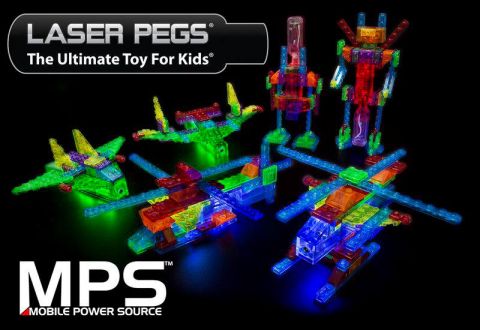 I have made numerous mistakes assembling one of the larger sets simply because I had trouble following the instructions. It was not fun. And here comes my second criticism of the sets. All of the boxes say for ages 5 and up, but there is no way a 5-year-old would be able to follow these instructions. The smaller sets most likely, but not the larger ones. This company just haven’t done their homework testing out these sets on real kids of different age groups. Every time I review these LEGO-wanna-be brands I appreciate how much thought and care LEGO puts in all aspects of their own sets; design, user-friendliness, part and color choices, testing with the target audience, boxes, instructions, packaging, etc. Below is a LASER PEGS commercial – kind of goofy, but gives you an idea on how the sets look.

As I have mentioned, the construction pieces in the LASER PEGS sets look exactly the same as LEGO elements. They essentially highjacked the designs of all basic LEGO parts (plates, bricks, slopes, etc.). The pieces do fit well, and have a nice feel to them. I believe they are made of the same type of plastic as LEGO’s own translucent parts. The issue is though that since all elements are translucent it is hard to separate them. The kind of plastic used for translucent parts is not as flexible as ABS plastic – this is why you rarely see LEGO stacking translucent parts on top of each other. However here all of the pieces are translucent, so having a LEGO brick-separator around while using this brand is a must. The power-bases and the connections of the Laser Pegs work fine. You never want to immerse them in water though. 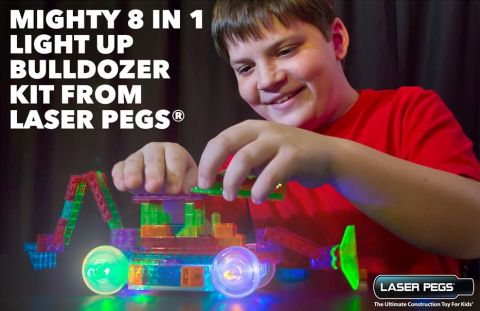 Once you assemble the set you turn on the light to either steady or blinking, and it looks fun. But that’s about it. From a LEGO fan’s perspective the design of the sets is hideous compared to LEGO sets; basically something a 3-year-old would put together. The color choices are also about that of a 3-year-old; a psychedelic nightmare (no offense to 3-year-olds – they are awesome little people!). But the sets do light up, and that’s cool. So all-in-all, I would say that if you are buying this for a child who is fascinated with lights and likes construction toys, I would say give it a try. There are no issues besides the ones I mentioned above, the quality of the pieces is good, and they are compatible with LEGO. 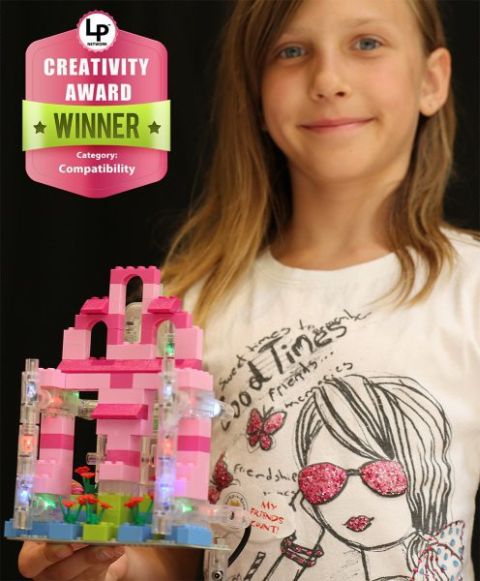 Of course the biggest question for older LEGO fans is are these sets and pieces have any use in our hobby? I do like the Mobile Power Source that you can get in the smaller sets. It is fairly small and can be used for lighting up LEGO creations, and is a good alternative to LEGO’s own light-bricks, offering more color choices. I also like that the power-bricks can be connected to create a whole chain of bricks that are lit up – something LEGO light-bricks can’t do. I was also considering that the tube-style Laser Pegs may be useful as lights inside LEGO buildings, but the tubes are actually pretty thick (somewhere between the diameter of a 1×1 and a 2×2 round LEGO brick), so it would have to be a quite a large building to use these in. Here are a couple of pictures of how LEGO and LASER PEGS can be combined. 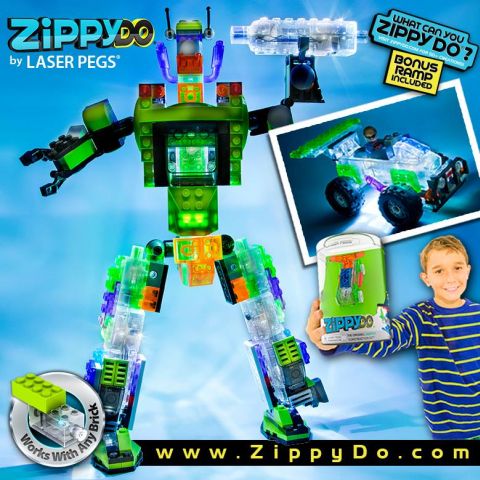 If you are interested in trying out LASER PEGS you can visit their website at LaserPegs.com. For LEGO fans I particularly recommend the Laser Pegs section where you can get the elements with lights by the piece, and the power-bases section with all the options for powering the lights. And of course you can also get the full kits. LASER PEGS is also available at select retailers (find one near you at their website) and they have a dedicated store on Amazon with most of their kits: LASER PEGS ON AMAZON 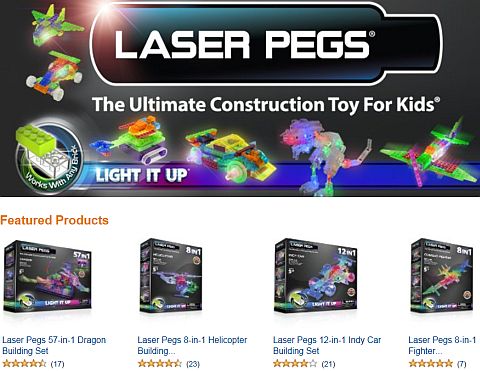 I hope this review helped you a bit in case you were curious about LASER PEGS. And if you have bought any of the LASER PEGS sets before and would like to share your own thoughts and opinion feel free to do so in the comment section below. 😉