Last week LEGO officially revealed the #21301 LEGO Ideas Birds set, which is the next official release in the fan submitted LEGO Ideas line. We have talked about this project before (see: LEGO Ideas Update & New Sets Coming!), and now we have a chance to see the set in detail. 🙂 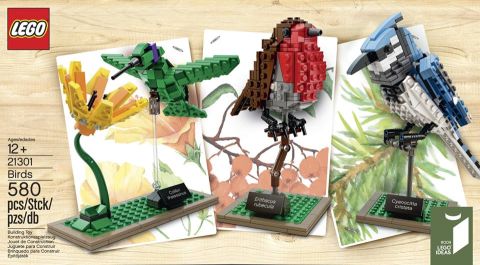 LEGO Ideas Birds was designed by Tom Poulsom (a.k.a. DeTomaso), a British LEGO fan and avid bird watcher. In an interview with the LEGO Ideas team he shares what inspired him to start this project: “The majority of my creations have been replicas of man-made objects (cars, trucks and spaceships) and I wanted to build something different. Creating something to look organic seemed like a nice challenge. I have always loved nature and being a tree surgeon and gardener I get a lot of inspiration from my job. I was digging a vegetable patch one day and during a quick break I noticed a Robin land on my fork handle. This was the inspiration behind “Bobby the Robin”. I built him that evening and enjoyed building this bird so much that I decided to build some of my favorite birds from Europe. Once I had built seven birds I posted one a day on Flickr. They were a hit! I couldn’t believe the attention I received. A follower suggested I add the birds to LEGO Ideas and here I am now with an official LEGO set containing my Idea.” 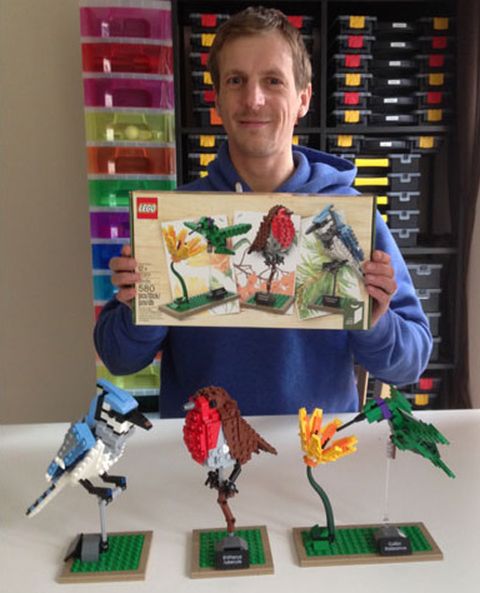 Tom actually built a whole series of LEGO birds and you can see them all in his flickr gallery at the following links: British LEGO Birds, North American LEGO Birds, Tropical LEGO Birds, and Oceana LEGO Birds. For the #21301 LEGO Ideas Birds sets, LEGO selected three of Tom’s designs from different continents and bundled them into one set. A name-plate has been also added to each bird with the Latin name of the species: the South American Hummingbird (Colibri thalassinus) with a flower, the European Robin (Erithacus rubecula), and the North American Blue Jay (Cyanocitta cristata). At least for me the real fun part is that all three birds (not the exact same varieties though) are frequent visitors in our backyard! Blue Jays regularly raid my bird-feeders (but I still love those rascals), American Robins (a bit larger versions of the one featured in this set) come down in big groups when the weather gets cold up North, and although we don’t have the exact same type of hummingbird here, we still have plenty of similar little buzzers visiting our hummingbird feeders. 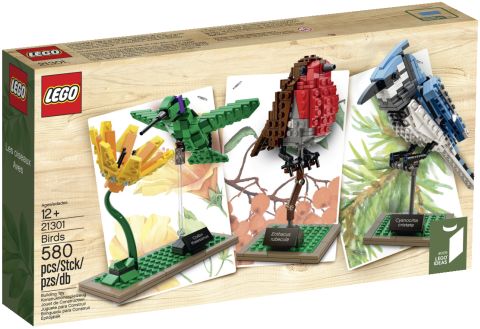 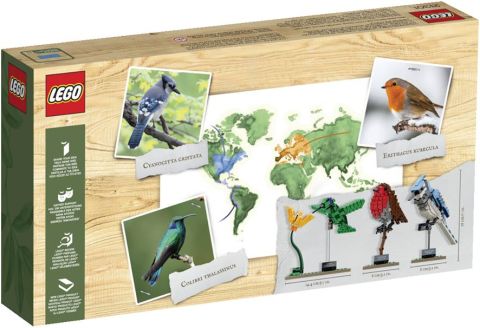 The #21301 LEGO Ideas Birds set is already listed at the Online LEGO Shop, although it won’t be available for sale until January 1st. But at least you can check out the details. Here is the official description: Put down your binoculars and get closer to nature with these intricate LEGO models of well-known birds! Created by keen gardener and bird enthusiast Thomas Poulsom and selected by LEGO Ideas members, each replica bird hails from a different continent: the Robin from Europe; the Blue Jay from North America; and the Hummingbird from South America. These beautiful and detailed models come with their own presentation stands showing their scientific names, so that you can display your birds for all to enjoy or detach and play as you wish. This set also includes 3 booklets containing lots more information about each of these fascinating species as well as the creator of these amazing models. Blue Jay stands over 7” (18cm) tall on its stand, Hummingbird stands over 5” (15cm) tall on its stand, and Robin stands over 6” (17cm) tall on its stand. 580 pieces. Price: $44.99 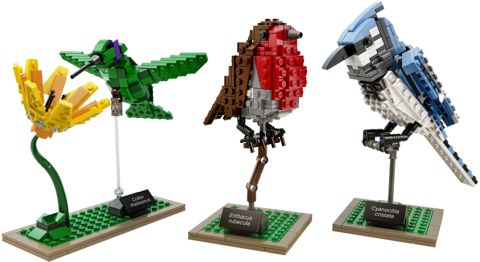 I really like the presentation of this set. The box is just so gorgeous, and so different than other LEGO sets. LEGO designers really put some thought into packaging this collection. As I have mentioned previously, I believe this set is going to be very popular not just with LEGO fans, but bird-watchers, and even schools and libraries. Just a fantastic little set that may even open up a whole new direction for LEGO in the future. I’m definitely planning to get this set as soon as it becomes available. And while we are waiting, you can also check out the currently available fan-created LEGO sets at the Online LEGO Shop.

So what do you think? How do you like the LEGO Ideas Birds set? Is this something you are planning to get? Would you like the theme to expand into a series with other birds? Feel free to share your thoughts and discuss in the comment section below! 😉