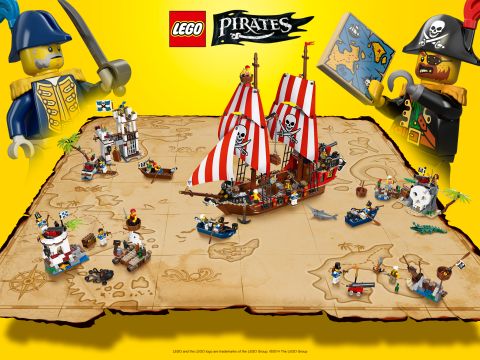 One of the interesting features added on the LEGO Pirates website is a short bio on all of the characters. There are ten minifigures listed on the side of the Bluecoats and ten on the side of the Pirates. Although many of them are just generic soldiers and pirates, some of the bios does reveal some interesting details. For example that the Bluecoats are governed by Governor Hacienda, who’s daughter secretly dreams of becoming a pirate. And that one of the Bluecoat Sergeants is a former pirate. On the other side we got Captain Redbeard, the toughest of the pirates, who plundered more forts and sailed for more years than he has teeth in his mouth. Which of course doesn’t say much, but you get the point. And than there is also the Pirate Princess, with an eye-patch. Will she make friends with the tomboyish daughter of the Governor, or will they be jealous rivals? 🙄 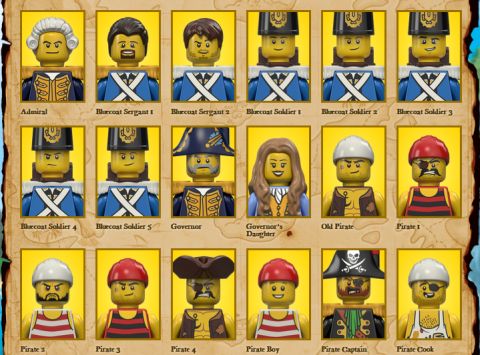 Then there is also detailed description of each of the upcoming 2015 LEGO Pirates sets. One of the nice features of the sets is that they can be combined for larger layouts.

➡ #70409 LEGO PIRATES SHIPWRECK DEFENSE: Ahoy there! A Bluecoat Soldier has discovered a marooned pirate living among the ruins of his fortified shipwreck, along with a stash of stolen treasure. Launch a surprise attack! Fire the spring-loaded cannon and blast the swaggering pirate’s hideout to smithereens, then recover the treasure and put the rogue behind bars where he belongs! Enjoy swashbuckling adventures with the LEGO Pirates Shipwreck Defense, featuring a pirate’s shipwreck hideout with a hinged port side for realistic cannon-impact effect. Combine with #70411 LEGO Pirates Treasure Island for an even bigger pirate adventure! Includes 2 minifigures with assorted weapons: a Bluecoat Soldier and a pirate. 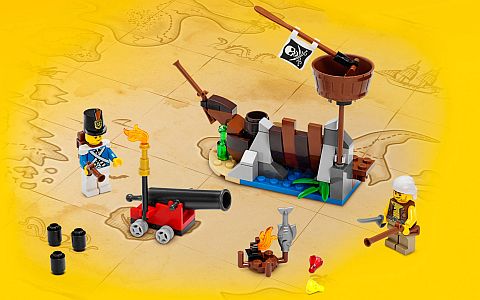 ➡ #70410 LEGO PIRATES SOLDIERS OUTPOST: Shiver me timbers! A cunning pirate is enjoying his latest catch aboard his raft when a giant octopus decides to join him for dinner… “Aargh!” After taking refuge in the crow’s nest he drifts by a military outpost and two very surprised Bluecoat Soldiers… “Hide the treasure!” Man the powerful spring-loaded cannon, sink the pirate’s raft and put the sea dog behind bars! But keep an eye out for the pesky crab that loves to steal jewels! Enjoy fun, swashbuckling adventures with the LEGO Pirates Soldiers Outpost! Combine with the #70412 LEGO Pirates Soldiers Fort for an even bigger pirate adventure! Includes 3 minifigures with assorted weapons and accessories: 2 Bluecoat Soldiers and a pirate. 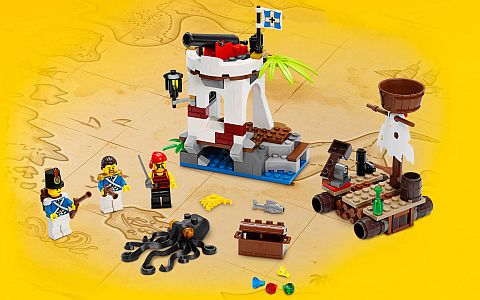 ➡ #70411 LEGO PIRATES TREASURE ISLAND: Land ahoy! The rogue pirate and the pirate queen have discovered a secret cave containing a treasure chest full of booty, but a Bluecoat Soldier has arrived in his armed rowboat! Weave through the cannon fire, draw your cutlass and capture the pesky pirates. Then tip the palm tree to open the huge skull gate, recover the stolen treasure and sail the scalawags to the nearest dungeon! But look out for the hungry crocodile lurking beneath the waves! Join the fun and adventure with the LEGO Pirates Treasure Island set. Combine with the #70409 LEGO Pirates Shipwreck Defense for an even bigger pirate adventure! Includes 3 minifigures with assorted weapons and accessories: a pirate queen, pirate and a Bluecoat Soldier. 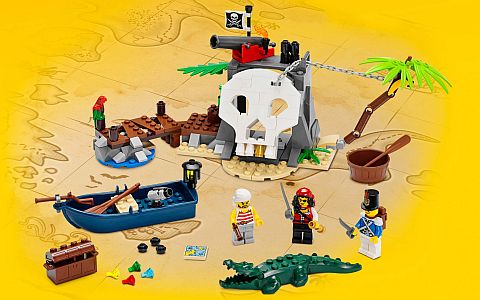 ➡ #70412 LEGO PIRATES SOLDIERS FORT: Kaboom! A cunning pirate has carried out a daring raid on the soldiers’ fort, rescuing his pesky mate and stealing the treasure. But the Bluecoat Soldier has manned the cannon and the Bluecoat Governor and his daughter are fighting back. Help foil the pirates’ escape, winch up the booty from their rowboat and open fire. When you’ve sunk the boat, capture the soggy pirates and put them back in prison where they belong! Join the excitement with the awesome LEGO Pirates Soldiers Fort, featuring a prison cell with breakout function. Combine with the #70410 LEGO Pirates Soldiers Outpost for an even bigger pirate adventure! Includes 5 minifigures with assorted weapons and accessories: Bluecoat Governor, Governor’s daughter, Bluecoat Soldier and 2 pirates. 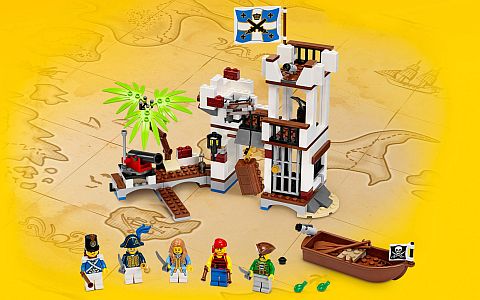 ➡ #70413 LEGO PIRATES THE BRICK BOUNTY: Hoist the Jolly Roger and set sail! The pesky pirates are heading for the high seas aboard their mighty galleon, with a chest full of booty stashed in the hold. But the Bluecoat Soldiers have caught up with them in their rowboat and are ready for action! Help the Bluecoat Soldiers commandeer the vessel and recover the stolen treasure. Launch a fierce broadside attack and board the ship. Then draw your weapons and defeat the scurvy pirates. When you’re done, put the rogues behind bars and lock them up for good! The awesome LEGO Pirates Brick Bounty features 2 tall masts with huge sails, rigging and crow’s nests, Jolly Roger, working winch with anchor, cannons, walk-the-plank function and a saw-nosed shark. Includes a skeleton and 7 minifigures with assorted weapons and accessories: a pirate captain, pirate first mate, pirate cabin boy, pirate cook, Bluecoat Admiral, Bluecoat Sergeant and a Bluecoat Soldier. 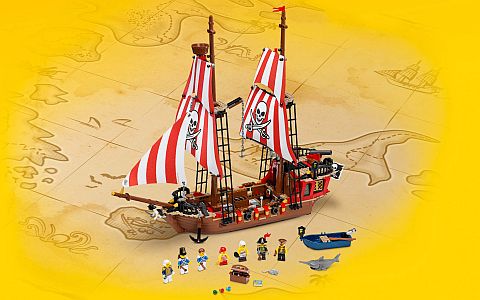 Besides the set descriptions and the character bios, you can also find some wallpaper downloads at the LEGO Pirates website. And also there is a free code you can use to unlock your very own Pirate Captain minifigure to play within the LEGO Minifigures Online game.

So what do you think? Are you excited about the return of LEGO Pirates? How do you like the sets and the minifigures? Feel free to share your thoughts and discuss in the comment section below! 😉