We have already talked about the London and German Toy Fairs where many new sets scheduled for the rest of the year were revealed (see: 2015 LEGO Sets – London Toy Fair Report, and 2015 LEGO Sets – German Toy Fair Report). In addition, the New York Toy Fair – where we can expect even more LEGO sets to be showcased – will be coming up from February 14th to the 17th. And while we were able to get a good selection of images previously (thanks to people who were able to participate in the events), since then I have also found some great videos from the German Toy Fair that shows even more details. So while we are waiting for the New York Toy Fair, I thought to share with you these videos. 🙂

Please note that these videos don’t show all the sets, just highlight some of the largest/most interesting ones. To see a more comprehensive list of the upcoming 2015 LEGO sets and themes, please refer to the previous toy fair reports linked above (and also at the end of this post). The reason I find these videos interesting is because they reveal some functions of the sets that were not possible to detect on still images. So let’s take a look… 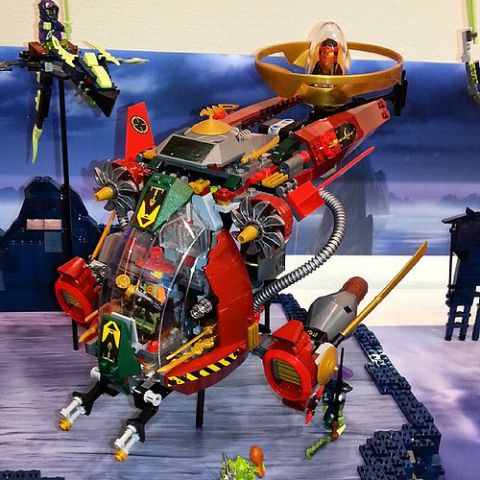 ➡ 2015 LEGO NINJAGO SETS: In the video below you can check out the function of several of the new Ninjago sets, including the #70738 LEGO Ninjago Final Fight of Destiny’s Bounty, the gorgeous new dragon in the #70736 LEGO Ninjago Attack of the Morro Dragon, and the #70735 LEGO Ninjago Ronin R.E.X. The interesting thing about this last set is that it has one of the new Airjitzu spinners perched at the back. The new spinners work with ripcords and can both fly in the air and spin on any hard surface. In this set pretty much the entire vehicle works as the handle to release the spinner, and there are also smaller sets with more streamlined handles. You can attach one minifig in the middle of the spinner, inside a clear plastic capsule. Based on this its pretty obvious that the goal of the game is not going to be knocking minifigs out of the spinners, like it was the case with the first generation of the spinner sets, but what the actual objective of the new game is going to be is not known at this point. My guess would be crashing spinners in mid-air, or something like that. 🙄

I’m very happy to see the spinners back. The first generation of spinners had tremendous play-value. They were easy to operate and were able to spin for a long time remarkably well. I do like the idea of flying spinners; anything that flies makes kids happy… even adults like flying toys! What I don’t like is the size and shape of the spinners. First of all, they are too big. Kids could easily pack 2-3 of the first generation spinners (along with minifigs) in their pocket before going out to the playground. These new spinners take up too much room, especially with the handles. Secondly, the spinners don’t look like LEGO at all; there are no studs, no way to customize them, and in general appear completely non-LEGO. This is a shame, and hopefully it won’t become a trend. I’m not a toy designer, but it seems to me that with a bit of extra tinkering they could have been made more LEGO-like. And it is also possible once we see them in person we will like them just as they are.

➡ 2015 LEGO ULTRA AGENTS SETS: This video is interesting because it highlights a LEGO Ultra agent set we haven’t seen before, the #70173 Ultra Agents Ocean HQ. The video also shows how the app-bricks work with LEGO Ultra Agents games on a tablet device. They are made of a conductive plastic that recognizes you moving the bricks around a touch-screen. App-bricks are included with all the new LEGO Ultra Agents sets.

➡ 2015 LEGO ELVES SETS: As we have discussed previously, the first wave of LEGO Elves sets is going to be released new month, and in the summer we will only get a couple of more; the #41077 LEGO Elves Aira’s Pegasus Sleigh, and the #41078 LEGO Elves Skyra’s Mysterious Sky Castle. In the video below you can see both, along with the sets in the first wave. I think they look excellent and can’t wait to see them in person.

➡ 2015 LEGO CITY SETS: This video shows some of the recently released LEGO Swamp Police sets, LEGO Construction Vehicles, as well as the upcoming LEGO City Deep Sea sets, LEGO City Space Station sets, and also the much talked about #60097 LEGO City Square, which includes 14 minifigures, a coffee kiosk, a LEGO store with a Pick-A-Brick Wall and delivery van, garage with a truck, and an orange/black trolley with a stop. A great addition to any LEGO City layout.

There are a couple other LEGO related videos from the German Toy Fair, one highlighting the upcoming LEGO Speed Champions and the other some of the new LEGO BIONICLE sets. I’m not going to post them here as I don’t want to overwhelm this page with too many videos, but you can check them out at the Spieletest.at YouTube channel. And if you would like to see even more videos two other channels, Atamaii.TV and Zusammengebaut also has some good video footage. They cover the same sets, but just a bit differently. I also recommend subscribing to these channels, as they cover the German Toy Fair each year.

So what do you think? Did the videos help you to get a better feel for the upcoming sets? Which ones are you looking forward to the most? Are you saving up for any of them? Feel free to share your thoughts and discuss in the comment section below! And in the meantime you can also check out the already released 2015 LEGO sets at the Online LEGO Shop.