OYO Sports & how it compares to LEGO?

As a LEGO fan you may have run into an interesting brand called OYO Sports. While I have never seen their products at major toy-stores, they do sell them through their own website as well as at various sporting events in the United States and Canada. OYO Sports is known for their fully licensed and authentic looking Baseball, Hockey and Football players in minifigure form. Although our focus here is mainly LEGO, I thought to review this brand because a lot of LEGO fans (especially those who are also sports fans) have shown interest in them. So let’s take a look at how OYO Sports compares to LEGO, and if it is worth for LEGO fans to give them a try. 🙂 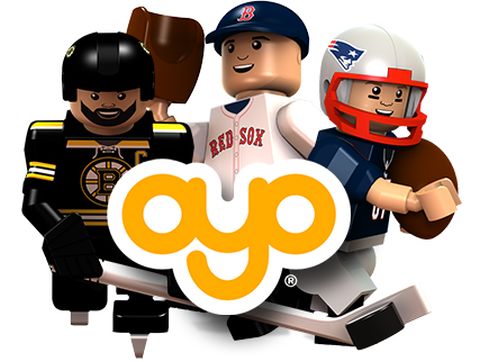 According to the OYO Sports website: It all started at the ballparkall. Shortly after building an elaborate starship from a popular building-block brand, a Tom Skripps (later OYO Sports founder and president) took his son to Fenway Park to take in a Red Sox game. Taking in the sights and sounds of the park, a true New England rite of passage, the duo would begin exploring the confines of the park in search of toys. As their searches went without results, an idea was born: creating minifigures of athletes that kids could play baseball with. Developing figures with rotating forearms, bending knees, and complete with the equipment of a true ballplayer – a ball, bat, and glove – the dynamics of the project were born. After many late nights of extensive patent work and distribution strategies, OYO obtained licenses with Major League Baseball and the MLB Player’s Association as its first professional sport. But an OYO goes beyond a figure capable of poses previously impossible for building-block minifigures. Their durable yet flexible build makes the figures capable of being handled as actual toys for kids and not just souvenirs meant to be kept in boxes, but also makes them a tremendous collectable for avid fans. The minifigures are great for the young baseball fan that wants a figure of their favorite pro. The same can be said for an avid fan of collecting in need of something to put on the mantle of his man-cave or room dedicated to a certain team. The OYO packaging was intricately designed to be able to fit in a kid’s pocket while looking like both a toy and 3-D baseball card. Following many colors, concepts, and logos, the final OYO package was complete and the rest is history in the making! 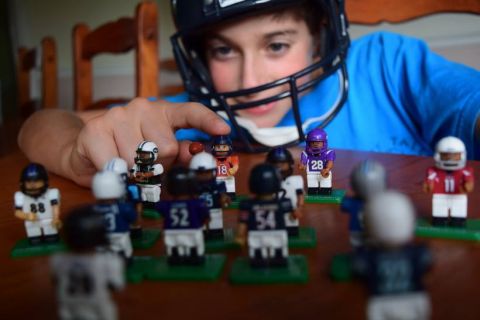 My first thought when reading the above was that this is such a great idea that LEGO really missed out on. Sports fans love to buy and display memorabilia of their favorite teams. And both adult and children like to have toy-versions of their favorite players. LEGO used to carry a sports line between 1998 and 2007 featuring basketball, hockey and soccer players. The soccer and hockey sets were very generic, and I believe this is the reason they may have not caught on that well. With the basketball related sets LEGO started to get it right; they included minifig versions of real players from real teams with collector cards, while also retaining playability. (If you have never tried the spring-legged LEGO basketball players, I highly recommend you do. They are really fun to play with, and they are in fact pretty good at getting the ball into the hoop!) 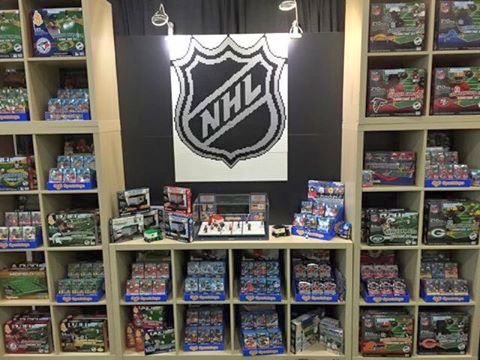 Going back to OYO Sports, they have been doing tremendous amount of work on their marketing. If you are a LEGO fan (and you don’t have an adblock app turned on) you will see their adds following you everywhere. They also have large fan-groups on social-media sites. And they participated in the recent New York Toy Fair with a very impressive display. They feature players from a huge number of both major and minor league teams, and they also have full kits with playing-fields, accessories, etc.

The packaging of OYO Sports products are really well thought out; like mentioned above, they are like 3-D sports cards with high quality printing and details on each of the players. The minifig and their accessories are in a little plastic box that also looks very good. Some of the sets also come with extra accessories and even little brick-built vehicles that you would find on sports-fields. My understanding is that the packaging of the kits are made in the USA, while the building elements and the minifigs are made in China. 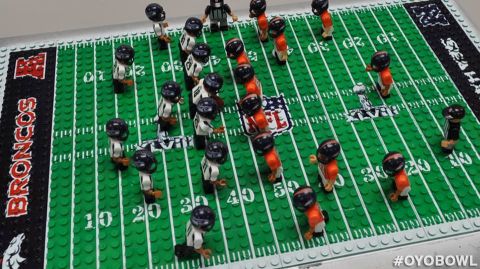 The minifigs themselves have plusses and minuses. Let’s start with the plusses. The OYO Sports minifigs are the same height as LEGO minifigs. The printing on the torsos and the helmets/caps are nice. They make an effort to have accurate facial features for the real-life players, and they are also done tastefully – in other words, the faces look very cute. The heads and helmets/caps are interchangeable with LEGO minifigs. And the various accessories can also be used by LEGO minifigs. The quality of the parts is good; everything fits together nicely, the color consistency is also good, and the flesh-toned heads are nice. 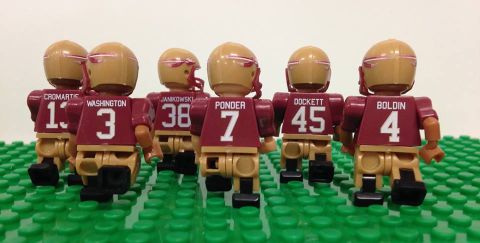 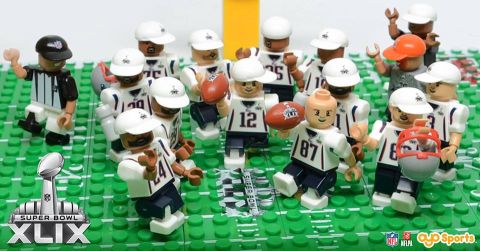 Now let’s talk about the bad. I do understand what this company is trying to achieve here; retain the look and feel of the cute blocky minifigs we are all so familiar with, but give them more articulation. The cuteness and the blocky-ness is fine. However the articulation turned out really bad. The legs have an awkwardly placed joint that is neither an ankle nor a knee, but somewhere in between. And the feet are way too small, making the entire leg-assembly even more strange looking. At the back of the legs there are two stud-holes, similar to what you find on LEGO minifigs, but they can’t attach to anything – so the minifig can’t securely sit on a studded surface. 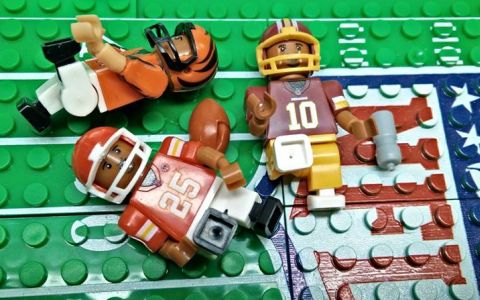 The torso-assembly is, sadly, the worst part of the OYO Sports minifigs. The torso itself is fine, and have a similar shape and style as LEGO minifigs torsos. The printing is also very nice on both the front and back of the torsos, and on at least some of the minifigs the arms are also printed. But the arms! Oh, dear! Those arms! They are just very-very bad. Each arm is made of three parts; the upper arm, the elbow, and the lower arm/hand. They are attached by pins going into holes, but they don’t clip in securely (like a LEGO minifig hand would clip into the arm), making both the elbow section and the lower arm section constantly fall off. Posing these minifigures, especially with accessories, is a real test of patience as the arms continually fall apart. Also, the whole arm-assembly is way too long, almost touching down to the feet of the minifig – kind of making it look like a gorilla. 🙁 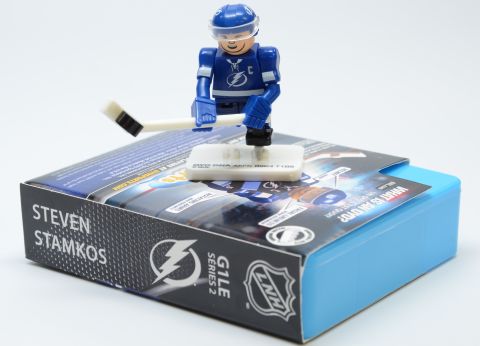 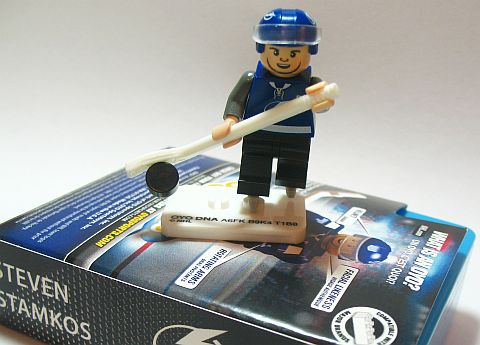 Fortunately the torso has very similar size arm-holes as LEGO minifigs, so you can just take out those awful contraptions and replace them with LEGO minifig arms. They fit a little tight, but not too bad. I should also add here that the torso and the legs can also be exchanged with LEGO minifig parts. I guess you could also glue together the parts of the original OYO Sports arms, but then of course they loose the whole point of them being poseable. On the pictures above you can see the hockey player I got, and my hybrid LEGO and OYO Sports version with mostly OYO parts and regular LEGO arms, hands and legs. I like it much better this way.

In summary, I would say that OYO Sports is very likely here to stay. They are filling a niche that LEGO left open for grabs, and they are doing it well. They are also making a good effort on offering nice looking collectables. I don’t agree with how the arms and legs are designed, but other than that the minifigs and accessories are good quality. And their real asset is the printing on the torsos and helmets/caps. The facial printings are also very nice. If you are a hockey, baseball or football fan, you may want to check out their products. They really have some gorgeously printed team logos on both the torsos and helmets. OYO Sports sets are fully licensed memorabilia and they are not cheap. Their smallest sets with just one sports-figure, collector-card and other accessories runs for $13. You can get them directly from the OYO Sports website, and you can also find them on eBay – sometimes a bit cheaper. Here are some recent listings: OYO SPORTS ON EBAY

I hope this review helps in giving you an idea about OYO Sports and their products. What do you think? Have you ever run into OYO Sports sets? Or do you have some already? Are you collecting them? What is your own opinion of them? Feel free to share your own thoughts and review in the comment section below! 😉

Next post: LEGO Guardians of the Galaxy funny video