Now that the 2015 LEGO Ninjago sets are finally released, let’s talk about them in more detail. This is an especially strong wave with some very nice sets, related to the latest season of the LEGO Ninjago TV series. The TV show itself is about the ninja participating in the Tournament of Elements in an island away from Ninjago City (see links to the episodes at the end of this post). While the last season was more futuristic and tech-based, this time we go back to the more traditional roots of the Ninjago story, with a good balance between buildings, vehicles and fight-scenes. Also, the minifigures are particularly nice in this wave (both the good and bad guys). As there are 11 new sets in this wave, we will only go into detail about the largest and most interesting ones, however you can check them out all under the LEGO Ninjago section of the Online LEGO Shop. 🙂 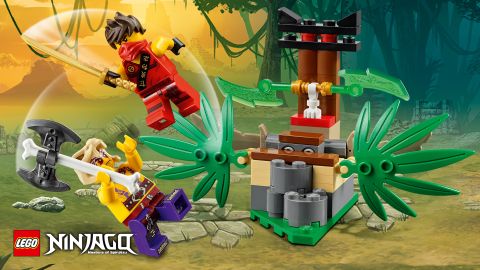 arrow: #70748 LEGO NINJAGO TITANIUM DRAGON: Ride to freedom on the Titanium Dragon! Break out from captivity with Titanium Zane on the monstrous Titanium Dragon! Saddle up with the Ninja hero and ride the intimidating armored dragon into combat. Open the mouth to bare its sharp teeth and adjust the head, wings, legs and tail for a variety of fearsome battle poses. Escaping will be tough because Clouse and Chop’rai lie in wait at the Anacondrai outpost, which has many weapons. Fend off Chop’rai’s attacks with the Anacondrai Blade. Watch out for the dangerous chain bola fired from the catapult and escape to victory with Zane! Includes 3 minifigures with assorted weapons: Titanium Zane, Clouse and Chop’rai. 360 pieces. Price: $39.99 – BUY HERE 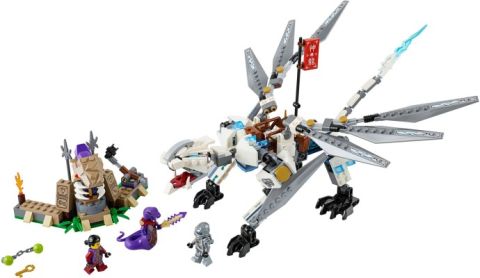 If you have seen the LEGO Ninjago Season 4 episodes already, you know that this is a very dramatic and pivotal point in the story; Zane finally able to summon and ride his Titanium Dragon! I personally like the dragons in the first season better with moulded and printed heads, but brick-built designs are also interesting from the building perspective – you can learn some very interesting building techniques. The badguys in this wave have a dark-red/purple/tan color scheme, which looks really good and also provides some very useful elements in rare colors. Below is the full review of the set by JANGBRiCKS where he will show you all the details:

➡ #70749 LEGO NINJAGO ENTER THE SERPENT: Enter the Anacondrai Temple and rescue Jay! Deep in the jungle, Jay is being held captive by the Anacondrai. Find your way to their temple with Lloyd’s map. Once you get there, beware – Kapau’rai is on guard with his Anacondrai Blade, and Zugu is armed with a crossbow. Do you dare to Enter the Serpent? There are traps everywhere, including hidden spring-loaded shooters in the stairs, poison balls dropping from the snake’s mouth and a trapdoor! Search the caves for a second map with directions through the Anacondrai Temple. Find your way across the suspension bridge to the prison tower and free Jay! Includes 5 minifigures with assorted weapons and accessories: Lloyd, Jay, Chen, Kapau’rai and Zugu. 529 pieces. Price: $59.99 – BUY HERE 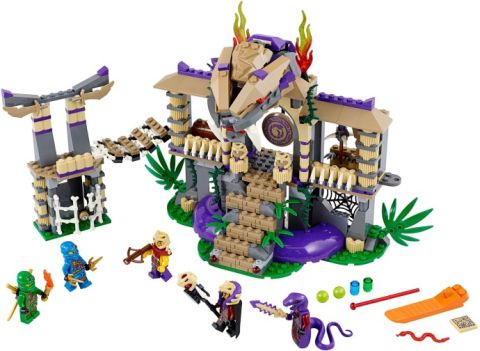 This is one of the largest sets in this wave with gorgeous colors and so many great pieces in dark-tan, including those still fairly rare masonry-bricks! Also five really nice minifigures. The Anacondrai Temple features a snake head with opening mouth with huge fangs and poison ball-dropping function. There are also two spring-loaded shooters in the stairs that you can active by pressing down on the statues. And of course there are lots of bones, spikes, spider webs and other creepy stuff around. You can check out all the details and play-features in the video-review below:

➡ #70750 LEGO NINJAGO NINJA DB X: Stage the ultimate battle against Pythor and his Anacondrai army! Pythor and the Anacondrai have returned to NINJAGO so the Ninja team must rush to the scene with the Ninja DB X to confront NINJAGO’s most fearsome enemy! Drive the powerful 6-wheel vehicle through the jungle and into battle at the Anacondrai gateway. Detach the Command Center to reveal the hidden dual spring-loaded shooter and open up the control room for easy play. Make battle plans in the hi-tech control area and choose your weapons and tools from the rack. Launch the flyer from the lookout-tower with Nya and fire its stud shooters. Zoom into combat with Kai on his cool motorbike. You must defeat the Anacondrai warriors and escape from the island! Includes 6 minifigures with assorted weapons and accessories: Kai, Nya, Garmadon, Pythor, Kapau and Chop’rai. 756 pieces. Price: $79.99 – BUY HERE 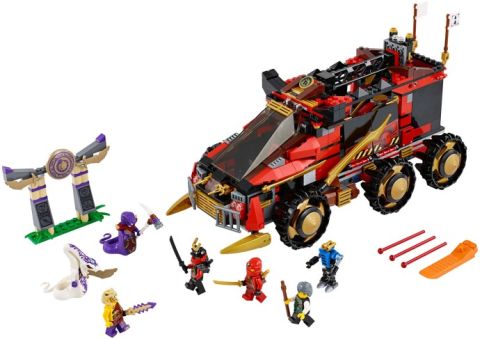 This is the largest set in the current wave, and it also plays a prominent role in the current season of the Ninjago TV episodes. This monstrous machine was built by Nya to work as the mobile headquarters of the ninja, and the vehicle she uses to sneak on the island to help the ninja. It features an opening dual cockpit, big buildable wheels, huge gold blade details, hidden dual spring-loaded shooter, foldable spoilers, plus a detachable control room with control area, computer screens, weapon rack, tool rack, a service station for Kai’s motorbike and a lookout tower with Nya’s detachable flyer with dual stud shooter. I always really liked LEGO’s HQ-type vehicles, and not just in Ninjago, but other themes as well. Think of the one the LEGO Alien Conquest, LEGO Ultra Agents, LEGO City Police, etc. They are big, full of play-features, interesting transforming options, ad-ons, accessories and more. They can provide hours, days, weeks of play just by themselves. Below is the full vide-review of the set where you can see all the functions:

➡ #70756 LEGO NINJAGO DOJO SHOWDOWN: Battle for the Jade Blade in the Dojo Showdown! Join Kai for a thrilling Tournament of Elements showdown at the Dojo! Show speed and agility to dodge the dangerous spinning blade bot and climb the wall parkour-style. Grab the chain or take the steps to reach the top of the Dojo, but beware of the poison dart flick missiles. Battle against Griffin Turner and Karlof, evading Karlof’s huge crushing hands, and grab the Jade Blade. Just don’t fall through the trapdoor into the fire prison because there’s no way out! Includes 4 minifigures with weapons: Kai, Sleven, Griffin Turner and Karlof. 215 pieces. Price: $24.99 – BUY HERE 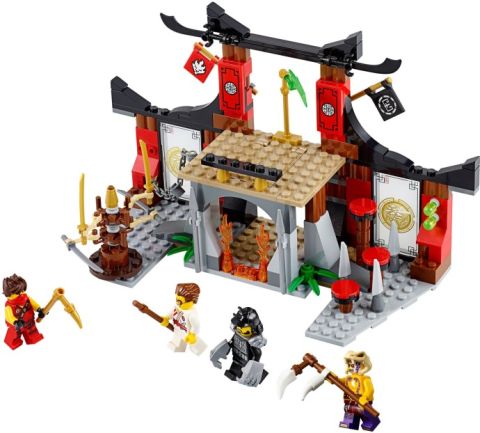 What a nice little set! I always like the striking black/red color-scheme of the Ninjago buildings. Also, those printed translucent window-panels that are included in some of the Ninjago buildings (including this one) are always exclusively beautiful, and are worth collecting. The minifig selection in this set is also especially nice, with getting two elemental masters: Karlof the Elemental Master of Metal, and Griffin Turner the Elemental Master of Speed. And we also get Kai in his new suit. The bare-chested tattooed guard is also excellent. Watch the video-review below for all the details:

Besides the above mentioned LEGO Ninjago sets there are many other smaller ones that were released this month that are also great. Here I just wanted to show you the largest and most interesting ones, as if I add too many videos people could have trouble loading the page. I would also like to add that the official LEGO Ninjago website has been updated with the bios of all the new characters. If you are interested its worth checking them out. You can also find product-descriptions, games, videos, activities and more. And you can find all the new sets at the Online LEGO Shop.

So what do you think? How do you like the 2015 LEGO Ninjago sets? Did you get any of them already? Or are you planning to? Which one is your favorite? Feel free to share in the comment section below! 😉