In the previous article (see link above), I have shared with you the designer-video introducing the LEGO Simpsons Kwik-E-Mart, and today we will look at a full review of the set by Stephen from the BrickShow. This way you have a chance to see all the details and play-features.

Really exciting, isn’t it? Both the inside and the outside of the LEGO The Simpsons Kwik-E-Mart are very realistic, and the little stations around the store are just excellent. Also, the new printed elements are a very welcome addition. Again, this set is perfect not just for LEGO Simpsons fans, but also for those who are looking for a convenience store in their LEGO City display. It would even look great next to the LEGO Modular Buildings, as the detailing is about the same. And in case you are wondering, here is a picture of the #71016 LEGO The Simpsons Kwik-E-Mart, next to the previously released #71006 LEGO The Simpsons House, by YouTube member just2good who also did a video-review on the set. You can see his review here.

For full details and description of the #71016 LEGO The Simpsons Kwik-E-Mart you can check the previous articles (see links at the end of this post), but I will repeat briefly that the set includes 2179 pieces, and six minifigures: Homer Simpson, Bart Simpson, Marge Simpson, Apu Nahasapeemapetilon, Chief Wiggum and Snake (a.k.a. Jailbird), and the price is $199.99. For more photos and details, and to buy this fantastic set visit the LEGO The Simpsons section of the Online LEGO Shop. 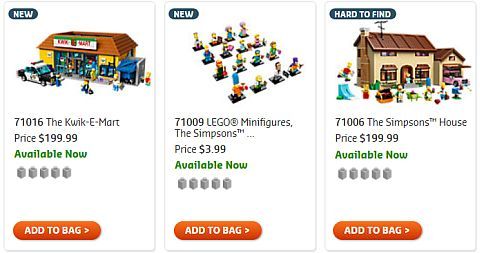 So what do you think about the LEGO Simpsons Kwik-E-Mart? Did you get it already? Or are you planning to? Did the video-review helped in deciding if this set is for you? Feel free to share your thoughts and discuss in the comment section below! 😉