As we have discussed previously, the LEGO City Deep Sea theme was released a few days ago with some really interesting sets. Every few years LEGO comes out with some kind of underwater sea exploration line, and for good reason; for kids one of the most fun activities is to play with LEGO in the bathtub or in the kitchen sink. Sometimes LEGO sets in an underwater setting have their own line, like LEGO Atlantis and LEGO Aquazone – both with a fantasy-based storyline. This time the sets are a sub-theme of LEGO City, which means that the story is more real-life based; submarines interacting with marine creatures and sunken ships. So let’s take a look! 🙂 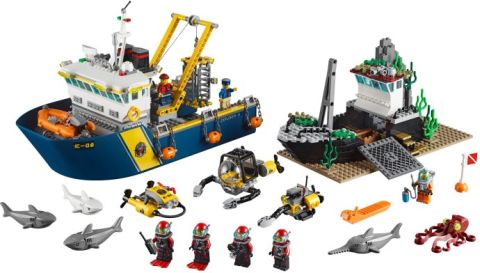 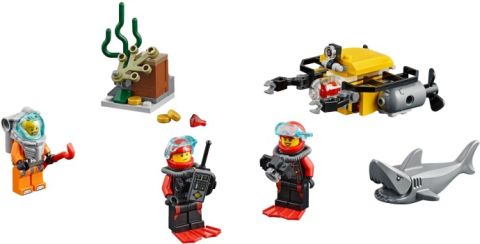 ➡ #60092 LEGO CITY DEEP SEA SUBMARINE: Here you get one impressive size and very good looking submarine with three minifigs, a bit of sea-floor to explore with a treasure-chest, and of course a shark. Here is the official description: Explore the depths of the ocean with the Deep Sea Submarine! Explore the secrets of the ocean with the Deep Sea Submarine! The LEGO City deep-sea explorers have spotted a mysterious chest lying in a whale skeleton, but a huge, snappy shark is preventing them from reaching it. Open the submarine’s glass bubble cockpit, climb aboard and submerge, using the powerful tilting thrusters to propel you through the water. When you reach the site, use the searchlight and grabber located on the sub’s robotic arms to retrieve the chest. Will it contain the lost treasure? Includes 3 minifigures with assorted accessories: a submariner and 2 scuba divers. 274 pieces. Price: $39.99 – BUY HERE 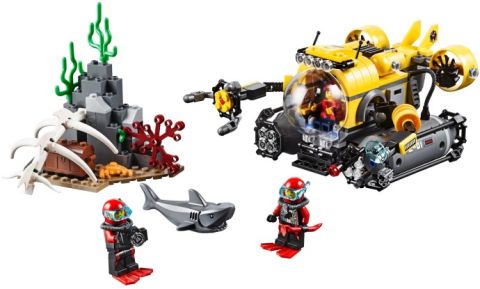 ➡ #60093 LEGO CITY DEEP SEA HELICOPTER: While this is a deep-sea theme, the main attraction in this set is not the small submarine, but the rescue helicopter. Here is the official description, and below you can also find the full video-review that will give you all the details on this set: Rescue the stricken divers with the Deep Sea Helicopter! Emergency! The deep-sea explorers in their submarine are being attacked by a shark and need your help! Jump aboard the awesome Deep Sea Helicopter, spin the powerful twin rotors and thunder over the ocean at breakneck speed! When you reach the scene, lower the winch, hook up the submarine and head for the safety of land. It’s just another day for a LEGO City helicopter hero! Includes 3 minifigures with assorted accessories: a submariner, pilot and a scuba diver. 388 pieces. Price: $49.99 – BUY HERE

➡ #60095 LEGO CITY DEEP SEA EXPLORATION: This is the second biggest set in the line with a large exploration vessel, a sunken ship, various underwater vehicles, a full team of divers, and lots of sharks! If you have a LEGO City setup with a sea-port, this set could be an excellent addition next to the more generic ships. Here is the official description, and below you can also find the full video-review that will give you all the details on this set: Call in the mighty Deep Sea Exploration Vessel! Recover sunken treasure with the Deep Sea Exploration Vessel! A shipwreck with a cargo of gold bars has been spotted at the bottom of the ocean. Jump aboard the awesome exploration vessel and head to the scene! This LEGO City model is loaded with the latest high-tech diving equipment. Launch the remote sub and scuba scooter, and activate the winch system to lower the exploratory submarine into the water. Then climb into the shark cage and join the other divers deep below the ocean’s surface. Check out the amazing white shark, swordfish and octopus as you retrieve the gold bars from the sunken ship. But be careful… the entire structure is unstable and might collapse at any moment! Includes 7 minifigures: 2 crew members, 4 scuba divers and a deep-sea diver. 717 pieces. Price: $119.99 – BUY HERE

➡ #60096 LEGO CITY DEEP SEA OPERATION BASE: This is the largest set in the series with 907 pieces, however it is a store exclusive with limited release. It should be available at LEGO store locations, and you can also check your local Toys’R’Us. It is currently not listed at the Online LEGO Shop, however my understanding is that eventually it will be added. The set includes an underwater base with a couple of vehicles and a large sea-plane. The BrickShow has already gotten the set and reviewed it here.

So what do you think? How do you like the LEGO City Deep Sea sets? Do you have a favorite? Are you planning to pick up any of them, or even get the full collection? Feel free to share your thoughts and discuss in the comment section below, and you can find all the sets with more pictures and details at the LEGO City section of the Online LEGO Shop. 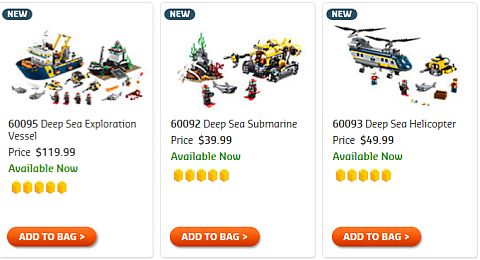