The third wave of LEGO Ultra Agents sets was released just a few days ago, and they are just as fantastic as the sets in the previous two waves. In fact, LEGO Ultra Agents has become the favorite of many LEGO fans – and not just kids, but adults too. So let’s take a closer look! 🙂

Before we begin I would like to point out that in general, non-licensed LEGO sets allow LEGO designers to incorporate a lot more clever play-features and functionality, because they don’t have to match the model to someone else’s design or intellectual property. Thus a 500-piece non-licensed LEGO set almost always has more fun features than a comparable licensed set would. Also, non-licensed sets are generally cheaper, so you get better value for your money as well.

Two excellent examples of LEGO themes that were recently developed by LEGO – including the stories themselves – are LEGO Ninjago and LEGO Legends of Chima. Both themes are extremely popular with kids and shows that LEGO is just fine standing on its own without having to depend on licensed properties. Ninjago and Chima may be a bit too fantasy-based and child-oriented for adult LEGO fans, but LEGO Ultra Agents is definitely something even adults can relate to as really cool. Agents equipped with the latest and greatest high-tech gear, villainous hackers disrupting city infrastructures, and vehicles that are both realistic and futuristic at the same time are popular topics of adult oriented movies, books and games. So yeah, LEGO Ultra Agents is awesome! 😀

➡ #70173 LEGO ULTRA AGENTS OCEAN HQ: Fend off air attacks from Electrolyzer’s Electro Flyer! Red alert, Ultra Agents! Electrolyzer is launching an aerial attack using his EMP bomb on the awesome Ultra Agents Ocean HQ to free Terabyte. Watch out for his approach on the Electro Flyer from the rotating command deck with Ultra Agent Trey Swift. Fold out the cannons and open fire with the dual rapid shooter and grappling hook shooter. Open up the sides of the boat to unleash the motorboat and send an Ultra Agent soaring into aerial combat with the jetpack. You must fend off this villain and keep his evil friend Terabyte safely under guard in the prison cell. Then use the huge computer screen as an AppBrick Gadget to play out other thrilling missions on your tablet! Includes 6 minifigures with assorted weapons and accessories: Ultra Agent Jack Fury, Ultra Agent Trey Swift, Ultra Agent Steve Zeal, Ultra Agent Caila Phoenix, Electrolyzer and Terabyte. 1204 pieces. Price: $99.99 – BUY HERE 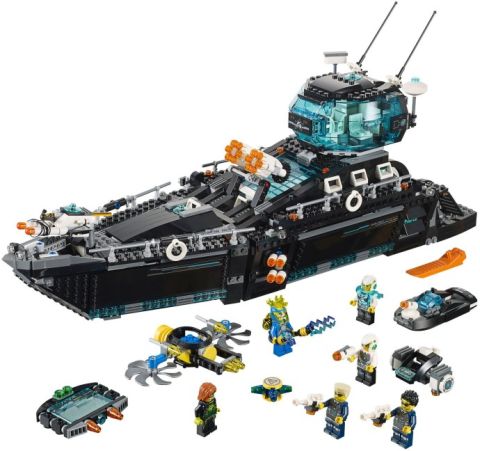 This is the largest of the current wave of LEGO Ultra Agents sets with a sleek looking black ship and translucent-blue highlights. This set is an excellent example of packing tremendous amount of play-features into one vehicle. There are so many hatch-doors, hidden compartments and guns everywhere. I particularly like the sliding door on top. And like in all LEGO Ultra Agents sets, the minifigs are excellent!

➡ #70172 LEGO ULTRA AGENTS ANTIMATTER’S PORTAL HIDEOUT: Attack AntiMatter’s Portal Hideout to save Solomon Blaze! Emergency call for Ultra Agent Max Burns! Evil AntiMatter is holding your agent leader Solomon Blaze captive in the prison pod at his huge Portal Hideout, and is threatening to send him through the portal. Launch a rescue mission in the Agents’ speedboat, steering clear of the robot shark Sharkanator’s snapping jaws. Swerve away from the sea base’s claw arm and portal mine launcher, and retaliate by firing the speedboat stud shooters. Climb the base using the zipline and grappling hook, but beware of the trapdoor as you seek out the prison pod. Release Solomon and then join forces to defeat AntiMatter and shut down that portal once and for all! Then remove the integrated AppBrick Gadget from the Sea Base to play out other thrilling missions on your tablet! Includes 4 minifigures with assorted weapons and accessories: Ultra Agent Solomon Blaze, Ultra Agent Max Burns, AntiMatter and Sharx. 475 pieces. Price: $69.99 – BUY HERE 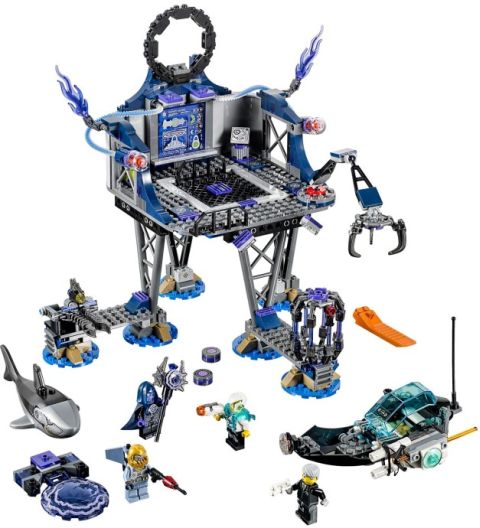 This is another large set in the LEGO Ultra Agents line, but not so much because of the part count, but because of the larger elements. This is also the first building in the theme – well, as much as you can call it a building. It is basically a floating offshore platform for the badguys to hide out. And just look at all of those beautiful translucent-purple elements! And that shark! It is the largest LEGO shark to date, and can swallow a minifigure in whole!

➡ LEGO ULTRA AGENTS ULTRASONIC SHOWDOWN: Intercept Professor Brainstein with the ultrasonic jet! Attention Ultra Agent Curtis Bolt! Professor Brainstein is on the rampage in a 4-legged mech suit, carrying out AntiMatter’s diabolical plans. Jump into the cockpit of the awesome ultrasonic jet and soar into the sky to track him down. Target the evil scientist with the 6-shot rapid shooters. Double the attack by launching the detachable mini drone. You must take Brainstein down and grab that tracking device before he can warn his evil master! Then use the mini drone as your AppBrick Gadget to play out other thrilling missions on your tablet! Includes 2 minifigures with a weapon and an accessory: Ultra Agent Curtis Bolt and Professor Brainstein. 187 pieces. Price: $19.99 – BUY HERE 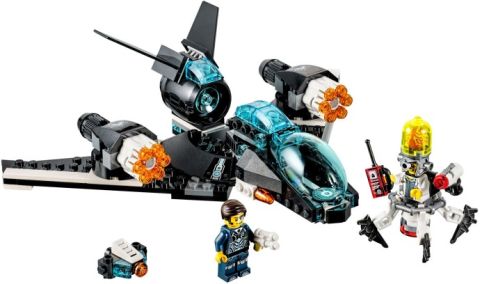 The smallest of the LEGO Ultra Agents sets in this wave, and the only jet in the line, with a pleasingly streamlined shape and big Gatling guns. The Gatling gun is a new type of shooter LEGO introduced recently and have been putting in as many sets as possible, because they are so much fun. Expect 1×1 round studs to be flying everywhere. Professor Brainstein is a particularly interesting character, reminiscent of Spy Clobs from the 2008 LEGO Agents sets or Cyrus Borg from LEGO Ninjago.

As you can see, all three new LEGO Ultra Agents sets are very solid, and very fun. I would recommend any of them. Also, if you are interested in this theme, all of the previously released sets are still available, so you can pick and choose the ones you like the most. They are all available under the LEGO Ultra Agents section of the Online LEGO Shop. 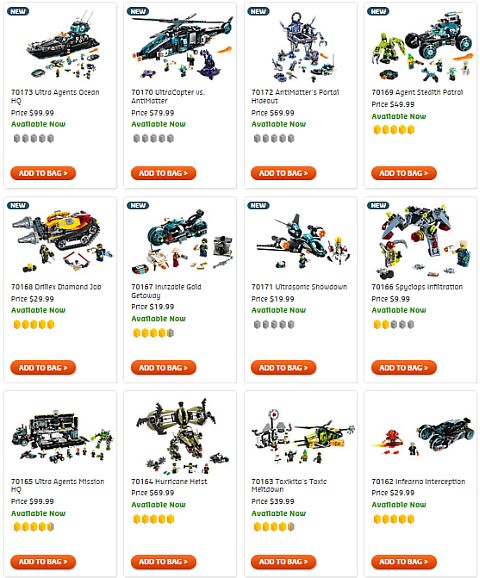 So what do you think? How do you like the LEGO Ultra Agents sets? Do you have any of them already? Which one is your favorite? And which of the new sets do you like best? Feel free to share your thoughts and discuss in the comment section below! 😉