Great news for LEGO Legends of Chima fans! The last of the LEGO Legends of Chima sets finally showed up at the Online LEGO Shop! I was expecting these to be released at the beginning of the month, but for some reason there was some delay. Anyhow, they are now available, and you can check them out below. LEGO Legends of Chima suppose to be ending soon, so if you like the theme, and would like to pick up some of the last sets and characters, this is your chance. 🙂

➡ LEGO LEGENDS OF CHIMA BLADVIC’S RUMBLE BEAR: The mech in this set is a pretty interesting combination of standard LEGO, LEGO Technic and LEGO BIONICLE elements. Whether you are into LEGO Legends if Chima or not, sets like this always provide an interesting study about complex building techniques (see video below on how the mech works). Here is the official description of the set: Convert Bladvic’s Rumble Bear vehicle into a fearsome mech fighter! The Ice Bears, arch-enemy of the Brown Bear tribe, have entered Chima again! Now, Iceklaw is escaping with the stolen CHI on his super-fast Ice Sledge, helped by Vornon the Vulture. Power up Bladvic with his Fire Harness and Fire Wings and give chase on the awesome Rumble Bear. Fire the ball shooters and evade blasts from Iceklaw’s Freeze Cannon and then transform the Rumble Bear from fire CHI power mode into fighter mode. Pose the arms, legs and head of Bladvic’s fearsome battle machine and overpower the rival warriors! Includes 3 minifigures with assorted weapons: Bladvic, Iceklaw and Vornon. 415 pieces. Price: $39.99 – BUY HERE 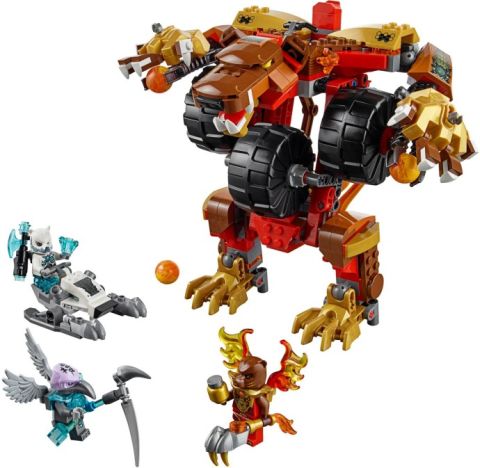 ➡ LEGENDS OF CHIMA MAMMOTH’S FROZEN STRONGHOLD: This set has the same color-scheme as the icy sets from last year and earlier this year, so if you have been collecting them this set is a nice addition. I think it’s a stretch to call it a fortress (as the official description does), but you do get a good number of those beautiful translucent-blue pieces, five excellent minifigures (including two very rare mammoths), and a couple of great little vehicles. Here is the official description of the set: Save Rinona from the Mammoth’s awesome fortress! Rinona has been captured by the Mammoth tribe and imprisoned in the awesome Frozen Stronghold. Rush to rescue her with Rogon in his powerful Rhino Roller, but beware—the Mammoths are well-equipped to defend their icy fortress. Evade blasts from the trunk’s stud shooters and the rotating disc shooter. When the Mammoth Tusk Flipper is launched, swerve clear before Maula can activate the flipping function to tip the Rhino Roller over. Once inside the stronghold, grab the precious CHI crystal, release Rinona from the frozen prison turret and then make your escape! Includes 5 minifigures with assorted weapons and an accessory: Rinona, Maula, Mottrot, Vardy and Rogon. 621 pieces. Price: $59.99 – BUY HERE 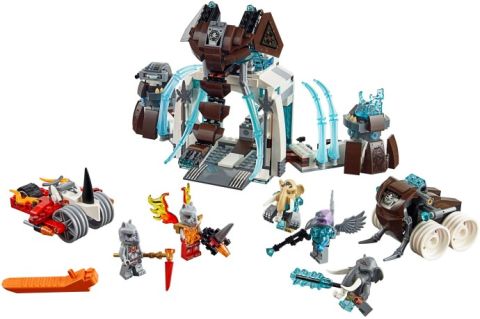 ➡ LEGO LEGENDS OF CHIMA KING CROMINUS’ RESCUE: This is basically a drop-ship in the shape of an alligator with flaming propellers and lots of teeth… I can imagine that LEGO designers had a lot of fun coming up with this! Check out all the play-features in the video below, and here is the official description of the set: Drop the Fire Tracker from the Helicroctor and save King Crominus! The evil ice hunters have captured King Crominus so team up with the Croc and Lion tribes to rescue him. Place Cragger in the opening cockpit of his massive Fire Helicroctor, spin the rotors and launch into the sky! Swoop down to pick up Laval’s Fire Tracker and pursue the Saber-tooth and Ice Bear warriors. Target the enemy with the flick missiles and activate the quick-release to drop Laval’s vehicle into battle. Aim the Fire Tracker’s disc shooters at the ice hunters and save the Croc king from the ice trap! Includes 6 minifigures with assorted weapons and accessories: Cragger, Laval, King Crominus, Strainor, Saraw and Icepaw. 863 pieces. Price: $89.99 – BUY HERE 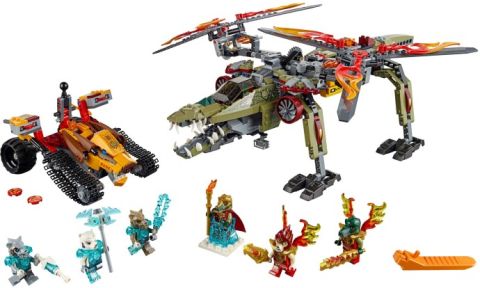 As you can see, this is a small wave of LEGO Legends of Chima sets, but they are worth considering because of the interesting designs, play-features, and great selection of some of the rarer characters. In the video-player below you can see all three sets in action, as well as details on their play features. I particularly like the set with the alligator – I guess because I live in alligator country. And because saying “Helicroctor” is really fun! Try it! 😀

All three of the new LEGO Legends of Chima sets – along with previous releases – are now available at the Online LEGO Shop. So what do you think? How do you like these last of the LEGO Legends of Chima sets? Are you planning to get any of them? Which one is your favorite? Feel free to share your thoughts and discuss in the comment section below! And don’t forget to say (or type) “Helicroctor” at least once! 😉 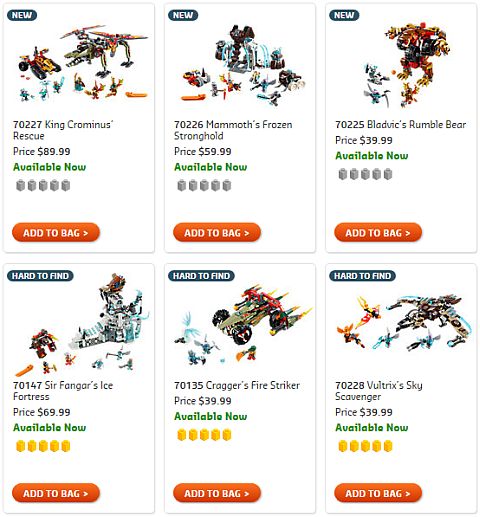