Five new LEGO Star Wars sets were released this summer, and they are definitely worth to checking out. Although a lot of LEGO Star Wars fans are eagerly waiting for the fall/winter release that will be related to the new movie, some of the currently available sets are also very interesting. Below I will share the details on each of the new sets, some of my thoughts on them, and also the video-reviews on each of the sets by the BrickShow! 🙂

➡ #75091 LEGO STAR WARS FLASH SPEEDER: This is a small, but well-designed set with plenty of firepower and a good selection of minifigures. I think the most interesting aspect here is how much the design improved since the first version (#7124 LEGO Star Wars Flash Speeder) was released 15 years ago. I wouldn’t call it a must-have set, but if you are into the Naboo scene, it is a nice addition. Here is the official description, and you can also watch the full video-review below: Deploy the Naboo forces into battle with the agile Flash Speeder! As the Battle of Naboo rages on, bring the Naboo security forces and their Gungan ally Captain Tarpals into the action with the maneuverable LEGO Star Wars Flash Speeder. This modified landspeeder has an open cockpit with space for a driver and 3 minifigure passengers, as well as opening storage compartments. When the battle really heats up, man the rotating, spring-loaded shooter at the back and fend off the Battle Droid forces. There are even 2 extra spring-loaded shooters built into the side-mounted engines for extra firepower! Includes 3 minifigures with assorted weapons and an accessory: Naboo Security Guard, Naboo Security Officer and Captain Tarpals, plus 2 Battle Droids. 312 pieces. Price: $29.99 – BUY HERE

➡ #75092 LEGO STAR WARS NABOO STARFIGHTER: This set also had previous incarnations (#7660 in 2007, #7877 in 2011, plus the #10026 chromed UCS version in 2002) and this newest variation is pretty much the same. If you missed out before, this is your chance to own this cool little starfighter. Here is the official description, and you can also watch the full video-review below: Blast the Droids with the super-sleek Naboo Starfighter! Recreate the exciting Naboo hangar scene from Star Wars: Episode I The Phantom Menace in which young Anakin Skywalker helps his Jedi protector, Obi-Wan Kenobi, fend off the attacking Trade Federation forces. Open the cockpit of the Naboo Starfighter, position the access ladder and load up Anakin and R2-D2. Then fire the twin spring-loaded shooters to send the Destroyer Droids and Battle Droids flying! As well as lots of authentic detailing and a cool R2-D2 ejector function, this LEGO Star Wars model also comes with a fueling station and a rotating stand to mount the model on. Includes 3 minifigures with a weapon and accessory: Anakin Skywalker, Obi-Wan Kenobi and a Naboo Pilot, plus R2-D2, 2 Battle Droids and Battle Droid Commander with assorted weapons. 442 pieces. Price: $49.99 – BUY HERE 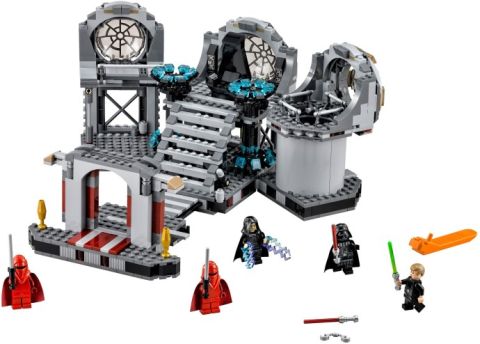 ➡ #75093 LEGO STAR WARS DEATH STAR FINAL DUEL: This is one of the most interesting sets in the 2015 LEGO Star Wars releases. First of all, we don’t get a whole lot of buildings in the LEGO Star Wars line, so that already makes it quite unique, and also the number of play-features that are jam-packed into this set makes it fantastic. In fact I would say that if you are an original Star Wars Trilogy fan, this set is a must. The play-features are really well thought out, and Darth Vader with the new two-piece helmet is awesome. Here is the official description, and you can also watch the full video-review below: Play out the epic final duel in Palpatine’s throne room! Reenact the epic final duel between Luke Skywalker, Darth Vader and Emperor Palpatine from the movie Star Wars: Episode VI Return of the Jedi. This amazing LEGO Star Wars recreation of Emperor Palpatine’s throne room aboard the second Death Star features loads of great play details, like swing-out side sections for easy play, opening entrance doors, Force Jump function, collapsing stairs and bridge, reactor shaft, and detachable throne section with rotating throne and hidden Lightsaber pop-up function. Can Luke overpower the Royal Guards? Will Lord Vader rescue his son from Palpatine’s deadly Force Lightning attack and send the evil Sith Lord tumbling down the reactor shaft? Only you can decide! Includes 5 minifigures with assorted weapons: Luke Skywalker, Darth Vader, Emperor Palpatine and 2 Royal Guards. 724 pieces. Price: $79.99 – BUY HERE 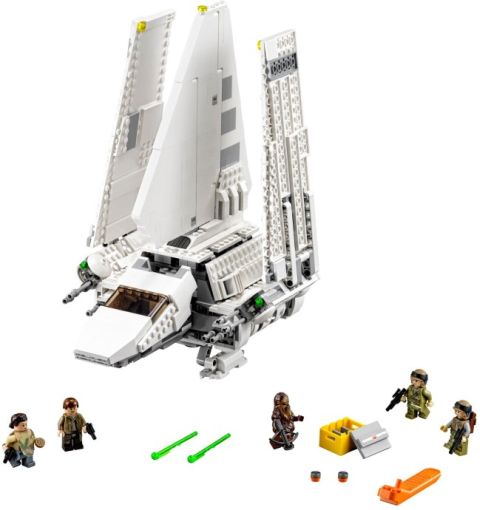 ➡ #75094 LEGO STAR WARS IMERIAL SHUTTLE TYDIRIUM: This is another set where it is interesting to compare this newest model to previous ones. In 2001 we got the #7166 LEGO Star Wars Imperial Shuttle, and in 2010 the #10212 UCS version. This latest set looks really good both in size and features. Also, the new printing on the minifigs is quite nice. Here is the official description, and you can also watch the full video-review below: Speed to the aid of the Rebels in the Imperial Shuttle “Tydirium” Board the stolen Imperial Shuttle Tydirium, set the wings for flying mode and race to Endor with Han Solo, Princess Leia, Chewbacca and the Endor Rebel Troopers. As featured in the exciting scenes leading up to the destruction of the Empire’s second Death Star in Star Wars: Episode VI Return of the Jedi, this impressive LEGO Star Wars starship features folding wings for flight and landing modes, retractable landing gear and an opening cockpit with space for 2 minifigures. There’s also an opening access hatch, opening centre section with space for more minifigures and 2 cool spring-loaded shooters to fend off any pursuing Imperial starships! Includes 5 minifigures with assorted weapons: Han Solo in Endor outfit, Princess Leia in Endor outfit, Chewbacca and 2 Endor Rebel Troopers. 937 pieces. Price: $99.99 – BUY HERE

➡ #75106 LEGO STAR WARS IMERIAL ASSAULT CARRIER: The stars of this set are definitely the Imperial Astromech Droid with a printed clear dome, and Sabine Wren with a dark-red Mandalorian Helmet. The set itself doesn’t appeal to me as it is very off-scale and looks awkward from every angle, but die-hard Star Wars fans may appreciate it more. The drop-off function for the mini TIE-fighters is pretty clever though. Here is the official description, and you can also watch the full video-review below: Take the battle to the rebels with the Imperial Assault Carrier! Transport TIE Fighters into battle against the rebels with the LEGO Star Wars Imperial Assault Carrier. Open the cockpit, load up a minifigure and then grab the lifting handle ready for flight. Push the triggers to release the 4 mini-scale TIE Fighters and join the battle with the twin spring-loaded shooters and rotating gun turret with dual stud blaster. Access the missile storage bay and ammo cargo boxes when supplies run low, and once the rebels have been defeated, reattach the TIE Fightersand get ready for the next exciting mission. Includes 5 minifigures with assorted weapons: Agent Kallus, Imperial Officer, Sabine Wren in Mandalorian outfit and 2 TIE Pilots, plus an Imperial Astromech Droid. 1216 pieces. Price: $129.99 – BUY HERE

So what do you think? How do you like the new LEGO Star Wars sets? Do you have a favorite that you definitely plan to add to your collection? Or do you plan to wait until the sets related to the new film gets revealed? Feel free to share your thoughts and discuss in the comment section below! 😉 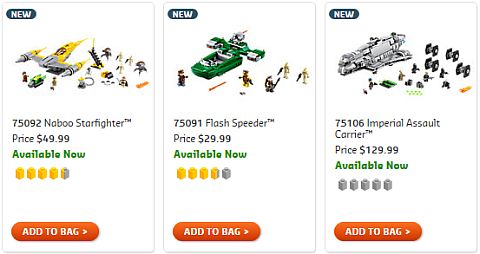