A much talked about LEGO set that was released recently is the #31039 LEGO Creator Blue Power Jet. This is a 3-in-1 set, with the power jet being the main model that can rebuilt into a helicopter or a hovercraft. While the second and third models are respectable in themselves, the one that has been getting LEGO fans so excited is the power jet itself. It is a beautifully shaped aircraft, and it can even sit minifigures – which is quite unusual, as LEGO Creator sets tend to focus on building and modeling, rather than minifig-scale play-features. So let’s take a closer look at all three models. 🙂

➡ LEGO CREATOR BLUE POWER JET: While LEGO tried to stay away from real-life military models, this aircraft looks suspiciously close to a Lockheed Martin F-35 Lightning II fighter-jet. LEGO gave it a nice and friendly dark-blue, white and red color-scheme and no guns, but it does have a digital gun-sight in the cockpit, so… As you will see in the video-review below by JANGBRiCKS the shaping of the entire aircraft is excellent. It also has some really nice features like movable wings and flaps. A surprising feature is access to the engine-bay area, with some nice detailing for the engine. And as I have mentioned, the fact that this jet can fit minifigures gives it a whole other level of awesomeness. The power jet measures over 5” (13cm) high, 14” (38cm) long and 12” (32cm) wide.

➡ LEGO CREATOR HELICOPTER: As you see in the video-review above, the helicopter is also a very good looking model. It is hard to deny that this also has a military look, but no guns, so it is up to you to decide how you want to use it. The shaping is well done here as well, the wheels are retractable, and the cockpit can accommodate one minifigure – although not as comfortably as in the jet. The helicopter measures (excluding rotors) over 5” (15cm) high, 15” (39cm) long and 6” (16cm) wide. 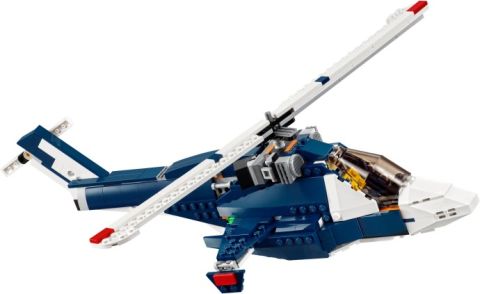 ➡ LEGO CREATOR HOVERCRAFT: This model is meant to be a hovercraft, but the shaping seems to be somewhere in between a hovercraft and a speed-boat. And it has a dual cockpit. It seems to be the most unrealistic of the three models with the least features, and the least compatibility with minifigures. It is not my thing, but I have read that some people really like it, so it’s all about personal taste. The hovercraft measures over 3” (9cm) high, 11” (28cm) long and 3” (10cm) wide. 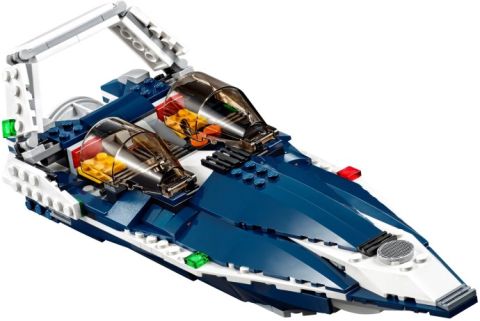 While most people will likely buy the #31039 LEGO Creator Blue Power Jet set for the main model, the other two are also worth building. The beauty of the LEGO Creator sets is that you can experiment with alternate models, thus giving you a lot more play-value and learning experiences – all for a more reasonable price than licensed sets. If you would like to check it out in more detail it is available – along with a couple of other new LEGO Creator sets – at the LEGO Creator section of the Online LEGO Shop. 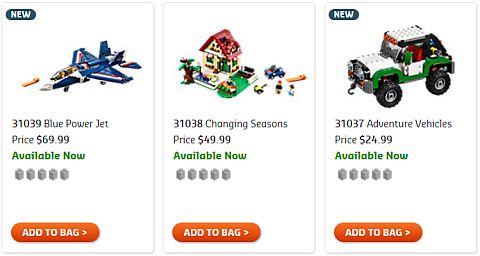 So what do you think? How you do like the LEGO Creator Blue Power Jet? Is this a set you are planning to buy? Or did you get it already? And what do you think of the alternate models? Feel free to share your thoughts and discuss in the comment section below! 😉