I found this sweet LEGO spaceship by a LEGO fan who goes by the name Paddy BrickSplitter. It has a bit of a LEGO Star Wars X-wing vibe with the shaping, mixed with the LEGO Galaxy Squad Bug Obliterator white/orange/trans-blue color-scheme. But that’s not all! There is a story here too! This shapely little ship has been borrowed by a couple of alien kids who are taking it on a ride to play some pranks on Earthlings: “Hey Grong, do you wanna fly by Earth? It really freaks out the dumb locals.” “Okay, Vobus, but my mom says we gotta have the ship back before 6.” 🙂 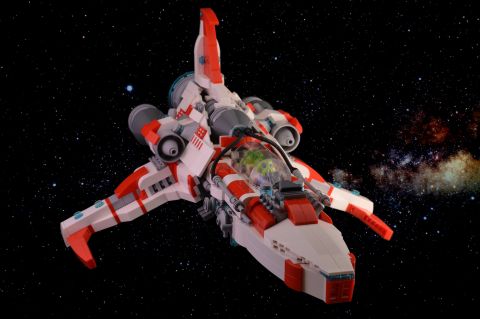 But pranks sometimes backfire, as you can see in the wonderful diorama below with the same spaceship. The alien kids ended up crashing their mommy’s ship into a medieval castle tower, right in the middle of a fight between the Lion Knights and the Dragon Knights. I wonder what happened next… whatever it is, alien mom is not going to be pleased for sure… 🙄 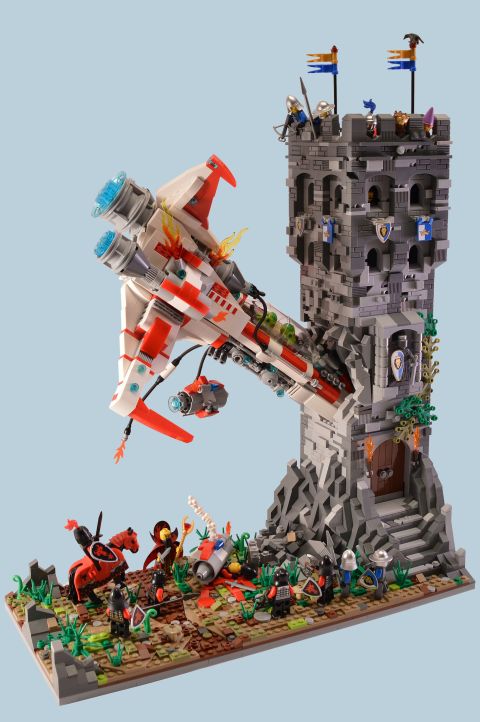 There is so much goodness in this LEGO creation! First of all, you rarely see a LEGO theme mash-up like this, mixing up different themes from different time periods. In addition, both the spaceship and the tower are amazing builds with some clever details. You can also check out some of Paddy BrickSplitter’s other creations at his flickr gallery.

What do you think? How do you like the spaceship? And the tower? And the whole mix-up of time periods? Did you ever think about building something like this? Feel free to share in the comment section below! 😉