One of the big events LEGO fans look forward to each year is Comic-Con International in San Diego, the largest multi-genre entertainment and comic convention in the world. Starting back in the 1970s, it originally showcased comic books and science fiction/fantasy related film, television, and similar popular arts. Since then the event expanded into virtually all genres, including horror, animation, anime, manga, toys, collectible card games, video games, web-comics, and fantasy novels. LEGO is also a major player at San Diego Comic-Con with various presentations, discussions, new set reveals, and some very special sets and minifigures that are only available at the event in limited quantities. The 2015 San Diego Comic-Con runs from July 9-12, with preview night on July 8th (for professionals and the press). Below are some of the details related to LEGO fans. 🙂

➡ 2015 SAN DIEGO COMIC-CON EXCLUSIVE LEGO SETS: Three special sets will be available for attendees of the event; LEGO Star Wars Dagobah Mini-Build with 177 pieces and an R2-D2 minifigure, LEGO DC Comics Super Heroes Action Comics #1 Superman with 145 pieces and a Superman minifigure, and LEGO Marvel Super Heroes Throne of Ultron with 203 pieces and four minifigures (Ultron and three Ultron Sentries). Each of the sets will be $39.99, but you will need to be selected in a raffle drawing to be able to purchase the set.

➡ 2015 SAN DIEGO COMIC-CON EXCLUSIVE LEGO MINIFIGS: There are also a couple of exclusive minifigures that will be given away at the event, with a limited number of 1500 each. Attendees can enter a drawing from Thursday, July 9 to Saturday, July 11th to try their luck. The two minifigures are LEGO Arsenal (Red Arrow) and LEGO All New Captain America (Sam Wilson). 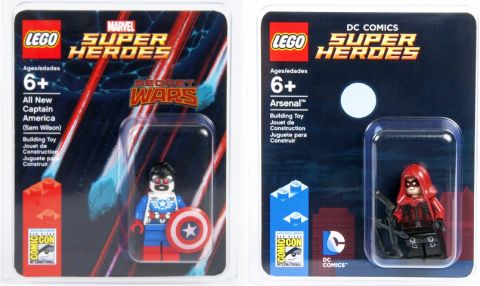 ➡ 2015 SAN DIEGO COMIC-CON LEGO EVENTS: You can find the full event calendar at the San Diego Comic-Con website, but I will also highlight the activities that are especially relevant to LEGO fans.

Making the LEGO Fan Scene – So what happened in the past year on the LEGO fan scene? Joe Meno (editor, BrickJournal magazine) talks with Nathan Sawaya (LEGO certified professional builder), Tommy Williamson (BrickNerd blogger and Brickfilmer), Brandon Griffith (creator, STUDS cards and ComicBricks), and Paul Lee (LEGO artist) about the people, the models, and even the films that are leading the LEGO fan community in new creative directions. The panel will also discuss how to become part of the community, and take questions. Saturday July 11, 2015 6:00pm – 7:00pm – Room 23ABC

World Premiere of LEGO DC Comics Super Heroes: Justice League: Attack of the Legion of Doom – Crime is on the run as the newly formed Justice League keeps Metropolis safe, and this makes evil genius Lex Luthor very unhappy. Together with Black Manta, Sinestro, and a gang of ruthless recruits, Lex builds his own league and declares them the Legion of Doom. With this super-powered team of terror and a plan to attack the top-secret government site Area 52, can Lex finally be on the verge of victory? The bricks are gonna fly when Superman, Batman, Wonder Woman and the rest of the Justice League face off against the world’s greatest supervillains. Catch the premiere, and then enjoy an entertaining panel led by actors Troy Baker (Batman: Assault on Arkham), Josh Keaton (Green Lantern: The Animated Series), and Khary Payton (Teen Titans Go!), producer Brandon Vietti (Batman: Under the Red Hood), director Rick Morales (Beware the Batman), and writer Jim Krieg (Green Lantern: The Animated Series). As always, surprise guests might pop up, and there will definitely be exclusive prizes for some lucky fans. LEGO DC Super Heroes Justice League: Attack of the Legion of Doom will be released August 25, 2015 via Warner Bros. Home Entertainment on Blu-ray Combo Pack, DVD, and Digital HD. Sunday July 12, 2015 11:15am – 12:45pm – Room 6BCF 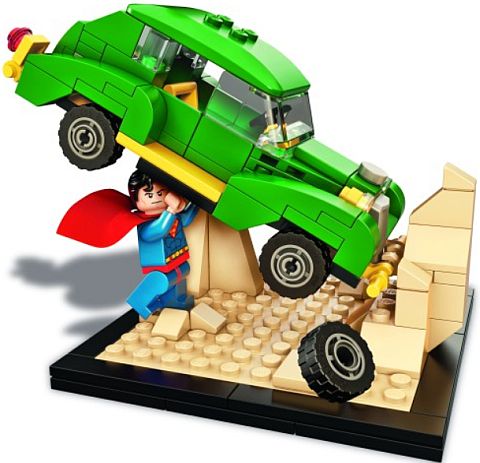 As you can see, there are plenty of events for LEGO fans at the 2015 San Diego Comic-Con. And of course there is much more than LEGO at the event, so there are other things to check out as well. Please note that attending Comic-Con requires purchasing a ticket (they call them badges) long before the actual event. In fact, scoring badges to SDCC is one of the most challenging, controversial and confusing tasks you will probably ever encounter with any convention. In addition, due to popularity, when tickets become available they usually sell out within an hour, and they are non-transferable. If you consider attending in the future, you should register at the SDCC website now and get notifications about when tickets become available for the following year. If you are a member of the media, you can get badges as well, but this also requires pre-registration. Another popular way people attend is to volunteer. Volunteers work for a few hours in various tasks, and they also get a free badge for that day. 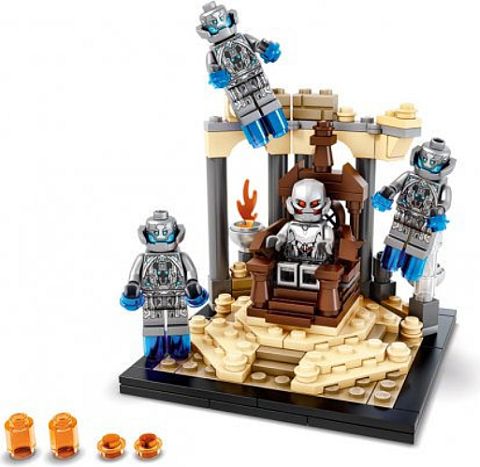 I expect that LEGO will be revealing some of the upcoming LEGO Ideas sets, and maybe we will get some unexpected surprises as well. I know that Allen from TheBrickFan.com and I believe Ace from FBTB.net are attending the event, so if you would like to get live coverage you can check out their websites. I will also write a summary update to cover any interesting news, new LEGO sets, etc. that will be revealed at the event, so stay tuned. And if you are one of the lucky ones to participate in SDCC yourself this year, you are welcome to share your experience in the comment section below. 😉