At the beginning of August we will get a new LEGO City train in the form of the #60098 LEGO City Heavy-Haul Train. It is a gorgeous train set with a full set of tracks, remote control, and a bunch of extras to set up your train layout. At the same time Amazon is having a sale on two currently available train sets, so I thought we should talk about trains today. Because nothing is as fun as LEGO trains! 🙂 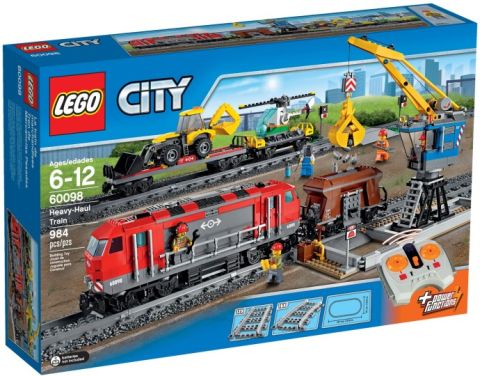 ➡ #60098 LEGO CITY HEAVY HAUL TRAIN: This is the new train set that will be available in just a few days. It is quite similar to the yellow #7939 LEGO City Cargo Train from 2010, but this time it is red. And who doesn’t like red trains? As mentioned above the set includes a full set of tracks (16 curved and 12 straight) and remote control. Here is the official description: Here comes the awesome Heavy-Haul Train! It’s busy at the LEGO City goods yard. The welder is carrying out some last minute repairs on the tracks while the driver and engineer do the final checks on the powerful diesel engine. Climb aboard the giant, sliding crane, lower the hook and carefully lift the heavy helicopter onto the flatbed wagon. Then take control of the rugged backhoe and gather the heavy bricks together while the crane operator scoops them up and drops them into the hopper wagon.When all the cargo is aboard, load up the backhoe and you’re ready to roll… “All aboard!” This tough motorized train with an 8-channel, 7-speed infrared remote control can haul just about anything! Includes 5 minifigures with assorted accessories: a train driver, engineer, welder, crane operator and a backhoe driver. 984 pieces. Price: $199.99 – ONLINE LEGO SHOP 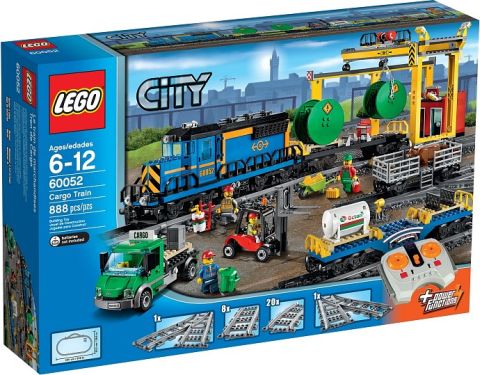 ➡ #60052 LEGO CITY CARGO TRAIN: Released in 2014, this is the currently available LEGO City train with a blue engine. This set also includes a remote control and tracks (20 curved, 8 straight, and 2 switch-points). Here is the official description: Move heavy goods – and animals! – around the city with the super-powerful LEGO City Cargo Train! This awesome motorized train with 4-channel, 7-speed, infrared remote control can transport almost anything. So it’s your job to make sure the cargo is in the right place at the right time to keep the city running smoothly. Attach the cattle wagon and 2 cargo wagons together and pull them around the circular rail track with the locomotive. Operate the forklift to move the pallets safely between the wagons and truck. Keep track of all the cargo leaving and arriving in the office at the impressive cargo train station. There you can use the sliding overhead crane with hook to move heavy cargo between vehicles or onto the ground. With so many play functions and cool features, this really is the ultimate set for train enthusiasts! Includes 4 minifigures: forklift driver, train driver, farmer and a truck driver. 887 pieces. Price: $199.99 – ONLINE LEGO SHOP 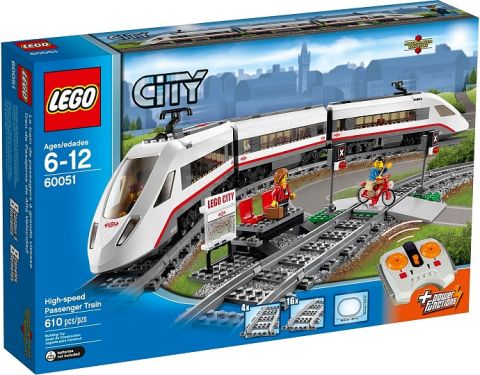 ➡ #60051 LEGO CITY HIGH-SPEED PASSENGER TRAIN: This train was also released in 2014, and it is much larger than the previous passenger train from 2010. It also comes with a remote control and a full set of tracks (16 curved and 4 straight), but there are not many extras so the price is lower. Here is the official description: Travel around the city in no time with the motorized LEGO City High-speed Passenger Train! Operate the 8-channel, 7-speed infrared remote control to power around the curved tracks at top speed. This streamlined, super-efficient train has a high-speed front profile and electricity contact points on top. Lift off the roof of the front car to place the driver inside at the cool dashboard and open the passenger cars to access the seats and tables. Wait for the train with the traveler at the way station, and pedal safely across the crossing with the cyclist once the train has gone past. Includes 3 minifigures: train driver, traveler and a cyclist. 610 pieces. Price: $149.99 – ONLINE LEGO SHOP 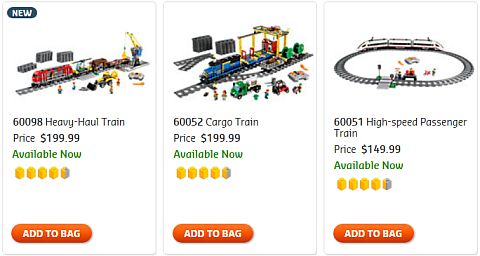 The two earlier trains are currently on sale on Amazon. The blue #60052 LEGO City Cargo Train is 22% off at $156, and the #60051 LEGO City High-Speed Passenger Train is 20% off at $120. Please note that prices on Amazon fluctuate quite a bit, so if you want to take advantage of the savings I would suggest you make a purchase as soon as possible. I particularly like the blue cargo train. If you collect cargo trains now you will have a yellow, blue and red one. Pretty sweet! Here are the links:

What do you think? Do you have any of the recent LEGO City trains? How you like them? Which one is your favorite? And how do you like the upcoming red heavy haul train? Are you planning to get it? Feel free to share your thoughts and discuss in the comment section below! 😉

Next post: Review of LEGO Ideas The Big Bang Theory