The momentum has been really building up for LEGO Dimensions. The sets won’t be available until September, but LEGO fans had the chance to try out the game at the recent San Diego Comic-Con. So far the feedback has been very positive from both adults and kids who tried the game. Which is interesting because the first reaction to LEGO Dimensions was that while the sets and the game looked cool, the prices appeared to be excessive. However now that we know more about the game, it seems like people are just really enthusiastic and can’t wait for the release. 🙂 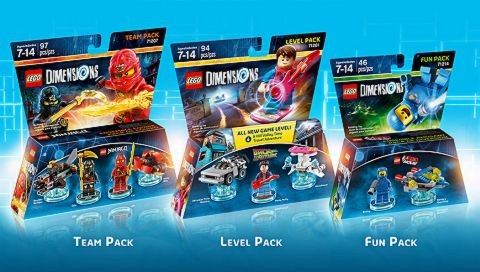 If you would like to learn more about LEGO Dimensions I recommend that you check out the press release at LEGO Dimensions – New Game & Sets Coming!, and also LEGO Dimensions More Characters Coming! for some updates. Today I will show you another update, which reveals that the LEGO Dimensions sets will come with alternate builds for every vehicle and gadget, as you can see in the trailer below.

LEGO has been putting serious effort into reminding people that LEGO sets can be taken apart and rebuilt in many different ways. The LEGO Creator 3-in-1 sets all include alternate models, most LEGO Technic sets also come with alternates, the LEGO Classic sets are basically free-building boxes that come with few suggestions and otherwise leave it up to kids to build whatever they want, and the LEGO Minecraft sets all include ideas for alternate builds and encourages children to use your imagination. This is a good thing, as kids regularly get bombarded with ready-made toys, and some people even started to view LEGO sets as nothing more than model kits to assemble once. Going back to the roots of LEGO as a medium of creative expression is exactly what will keep LEGO in the forefront as a quality toy and as a great educational tool.

Another fun LEGO Dimensions video that was recently released is this funny interaction between Shaggy from the Scooby-Doo team and Batman, where Shaggy introduces Batman to a new type of mystery machine. So far all LEGO Dimensions teasers have been quite enjoyable.