The second wave of LEGO Mincraft sets was released recently with four new sets and several new minifigures, so today we will look at them in detail. There are some new terrains and interesting play-features that I think Minecraft will appreciate. Also, just like in the first wave, each of the sets come with inspirations for alternate models to change up the terrain a bit. 🙂 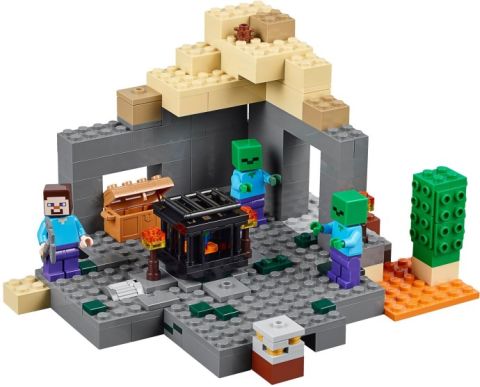 ➡ #21119 LEGO MINECRAFT THE DUNGEON: This is the smallest of the second wave of LEGO Minecraft sets, but it comes with some clever play-features, as you can see in the video-review below. But my favorite is definitely the mini zombie, built in the same style as the LEGO Minecraft Micro-World characters. For a small set like this the price per/piece ratio, the number of minifigs, and the playability are all good – this is a solid LEGO Minecraft set in every way. Here is the official description: Enter the zombie-spawning dungeon at your peril! Venture into The Dungeon on a perilous quest for valuable ores! Craft torches from your resources to light your way and disable the mob spawner. Wield your iron pickaxe to defeat the roaming zombies, then mine the gold ore and grab the chest containing wheat and redstone. But watch out… zombies can spawn anywhere! Rebuild the set for more LEGO Minecraft creations! Includes 3 minifigures with assorted accessories: Steve and 2 zombies. 219 pieces. Price: $19.99 – BUY HERE 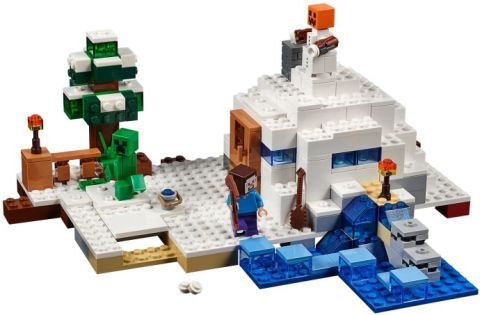 ➡ #21120 LEGO MINECRAFT THE SNOW HIDEOUT: This is a fully enclosed LEGO Minecraft building that opens with hinges, so you have options both for the layout and playability. Plus there are also instructions for building an alternate model. But what stands out for me most as a collector of LEGO colors, is that this is the first time we get 2×2 bricks in transparent-medium blue! Eight of them! Also, while Steve and the Creeper are the same as in previous sets, the Snow Golem is unique, and is a pretty clever built if I might say so. Here is the official description: Build to survive with The Snow Hideout! You’ve ventured out on an icy mining expedition, but the sun is heading for the horizon and hostile mobs will soon be roaming this snow-covered landscape. Lay down your wooden pickaxe, store your newly mined coal and build to survive! Use your wooden shovel and the crafting tables to craft snow blocks from the drift, then take your bucket and scoop water from the lake to make ice-block windows. Craft a door and build a netherrack fireplace and chimney. Finally, build a Snow Golem to ward off the exploding Creeper that roams after nightfall and you’re ready for action! Rebuild the set for more LEGO Minecraft creations! Includes a Steve minifigure with assorted accessories, plus a Creeper and a Snow Golem. 327 pieces. Price: $34.99 – BUY HERE 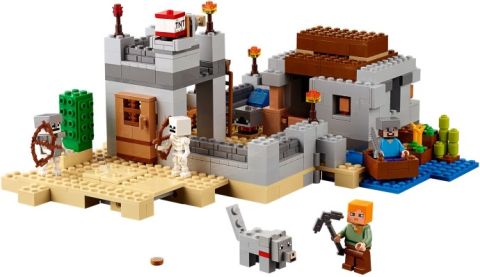 ➡ #21121 LEGO MINECRAFT THE DESERT OUTPOST: This is my favorite set in the second wave of LEGO Minecraft sets because it opens up in so many interesting ways, really expanding the play-area as well as the options for customization. And then we also get Alex, and a wolf! Here is the official description: Prepare for battle at The Desert Outpost! Hostile mobs are spawning like never before, and the desert is becoming a very scary place to be… it’s time to build The Desert Outpost! Help Alex construct the house and lookout tower, build a protective wall and ring the fortress with burning torches. Have the tame wolf stand guard while you craft a bed, table, door, ladder and a boat, then sail out in search of crops to farm within the outpost walls. As darkness falls, silhouettes of approaching skeletons appear on the desert horizon. Grab your weapons, load up the TNT launcher, and prepare for battle! Rebuild the set for more LEGO Minecraft creations! Includes 2 minifigures with assorted weapons and accessories: Steve and Alex, plus a wolf and 2 skeletons. 519 pieces. Price: $59.99 – BUY HERE 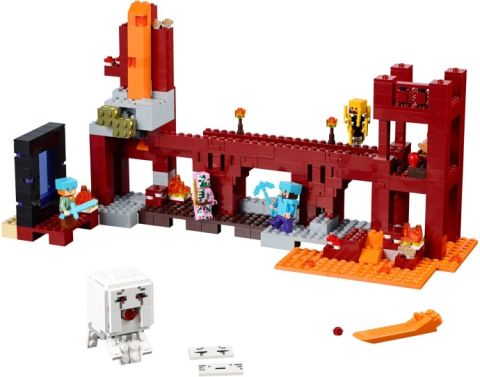 ➡ #21122 LEGO MINECRAFT THE NETHER FORTRESS: Look at all that delicious dark-red! This is the largest of the second wave of LEGO Minecraft sets, and to me it looks like a well-made and unmistakable representation of the terrain in the Minecraft game. The set also comes with a great variety of minifigs, plus a brick-built stud shooting Ghast. I also like the way the portal was designed. The only downside of this set is the price; compared to the other sets the price/piece ratio is way out of the normal range. I don’t see any obvious reasons why this because LEGO Minecraft sets are just basic bricks, but yeah, this set is overpriced by about $20. You might want to wait with this one until it goes on sale. Here is the official description: Battle the hostile mobs at The Nether Fortress! You’re running low on supplies that the Overworld just can’t offer… light the obsidian portal and step through to reach The Nether Fortress! This forbidding structure is protected by an array of hostile mobs. Help Alex defeat the Blaze that guards the fortress. Take your diamond pickaxe and mine glowstone to light your way, but be careful not to trigger a lava flow! Build an access point to breach the fortress wall, grab your diamond sword and spring a surprise attack on the Zombie Pigman. Take on the red-eyed, fireball-shooting Ghast to obtain the chest containing 2 diamonds and a golden sword, collect mushrooms and Nether wart, and mine Nether quartz ore. It’s all in a day’s work for a LEGO Minecraft hero! Rebuild the set for more LEGO Minecraft creations! Includes 3 minifigures with assorted weapons and accessories: Steve, Alex and a Zombie Pigman, plus a Blaze and a Ghast. 571 pieces. Price: $79.99 – BUY HERE

All in all, I think this second wave of LEGO Minecraft sets is just as good as the first one. I’m well aware that LEGO Minecraft is not going to appeal to everyone, however if you like the game, I think you will like the sets too. Also, if you are looking for nice, earth colored basic LEGO pieces and large plates, you might consider these sets as well. So far my favorites are the #21114 LEGO Minecraft The Farm, and the #21115 LEGO Minecraft The First Night because they look great together. And from this wave I like the #21121 LEGO Minecraft The Desert Outpost the most. The #21116 LEGO Minecraft Crafting Box is also an interesting set that you might want to check out. You can find all ten sets released so far (and there will be a third wave next year), under the LEGO Minecraft section of the Online LEGO Shop. 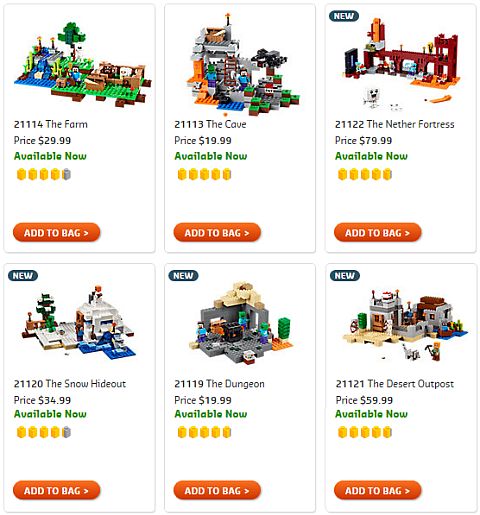 So what do you think? How do you like this second wave of LEGO Minecraft sets? Are you planning to get any of them? Do you have a favorite? And what do you think of the minifigures? Feel free to share your thoughts and own review in the comment section below! 😉