The new LEGO Scooby-Doo sets are undoubtedly fun to build, play with and collect. And that’s exactly what many LEGO fans have been doing since the theme was released earlier this month. The entire collection is only five sets, so it is easy to get the full series. We have discussed the sets in detail (see: LEGO Scooby-Doo Sets Video-Reviews), and today I would like to share with you a few pictures from the collector’s perspective. 🙂 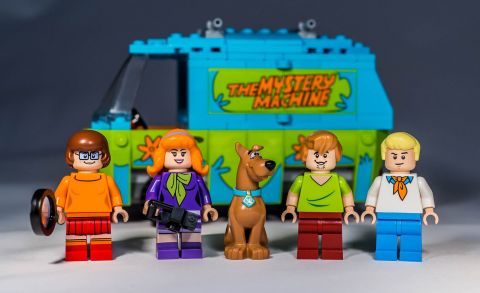 LEGO Scooby-Doo fan Gnaat Lego has been sharing some great pictures of the collection in his flickr gallery that gives a really good sense of the entire theme and the collectability of the sets and characters. In the picture above you can see the entire gang with The Mystery Machine, Velma, Daphne, Scooby Doo, Shaggy and Fred. Of course we know that The Mystery Machine is a set on it’s own, the #75902 LEGO Scooby-Doo The Mystery Machine, but that set only includes Shaggy and Fred (I should note here that this is the only set Fred appears in). If you want the whole gang, you have to get at least one other set, the #75904 LEGO Scooby-Doo Mystery Mansion, because Velma only appears in this set. This is not a bad thing however because the mansion is awesome. While Velma and Fred only got one minifig incarnation, Shaggy has several; there are two distinct torso designs and three different heads. Each of the heads comes with double sided facial expressions, so all in all there are two different torsos, three different minifigs, and four different facial expressions.

Another character with several versions is Scooby-Doo. Scooby has two different bodies; one sitting and one standing and while the head-mould is the same, it comes with three different printings: unprinted mouth, unprinted mouth with goggles over the eyes, and mouth with teeth showing. Because the head is removable and interchangeable, amongst the five sets there are four different Scooby-Doo versions (see below).

Now, let’s look at the badguys. There is the Ghost/Bluestone the Great (the first on the picture below without the ghost shroud), the Black Knight/Mr. Wickles, the Headless Horseman/Elwood Crane, the Swamp Monster/Mr. Brown, the Lighthouse Keeper/Verona Dempsey, the Vampire/Bob Oakley, and the Mummy/Dr. Najib. There is also the Zombie/Zeke, who is missing from the picture here. All of the badguys have only one version, and the most that appear in one set is two.

And here is one more picture of all the characters from the LEGO Scooby Doo theme. It includes all the badguys in their full attire, and one version of Scooby-Doo and Shaggy, plus the rest of the gang. As you can see, all the minifigures are really nicely detailed with torso printing (front and back on most), and leg printing on some. Also, almost all of them come with double sided facial expression. In addition, there are four new hair pieces (Fred, Daphne, Shaggy and Velma), and that awesome pumpkin head!

All in all this is a great theme to collect. I didn’t focus on the sets themselves here because we talked about those in detail in the full review article, but they do have a collectability feature as well. The Mystery Machine, The Mystery Plane, the boat in the #75903 LEGO Scooby Do Haunted Lighthouse, and the motorbike in the #75904 LEGO Scooby-Doo Mystery Mansion all have the same azure-lime-orange color-scheme – really fun to put them next to each other. Also, there is going to be a mini version of the Mystery Machine in one of the LEGO Dimensions Theme Packs released later this year, so that would be one more set to add to the collection. You can find all the sets at the LEGO Scooby-Doo section of the Online LEGO Shop. 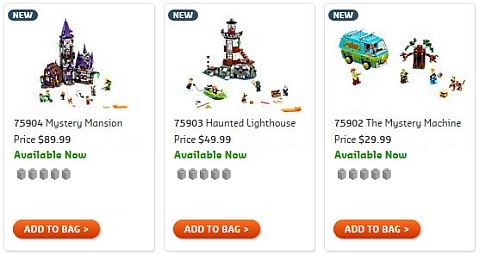 So what do you think? How you do like the LEGO Scooby-Doo sets? Do you have some of them already? Or did you get them all? And how do you like the minifigures? Feel free to share in the comment section below! 😉