Awesome news for LEGO fans! As you may remember the Double VIP Points period suppose to end on the 14th of this month, however LEGO generously extended this special promotion period until the end of October! So for the entire month you can earn Double VIP Points! 🙂

As we have discussed previously, normally you earn 1 VIP Point for every $1 you spend online or at LEGO store locations. Once you reach 100 VIP Points, you receive a $5 reward. During the Double VIP Points period you earn twice as many point on all of your purchases, so you can accumulate VIP Points much faster. Double VIP Points only happen a couple of times a year, and usually for short periods, so having this promotion extended for an entire month is special indeed!

Talking about the holidays, this is also an excellent time to pick up the currently available LEGO Winter Village sets; the #10249 LEGO Creator Winter Toy Shop, and #10245 LEGO Santa’s Workshop. And you might also consider the LEGO City, LEGO Star Wars and LEGO Friends Advent Calendars. You can find them all under the seasonal items section of the Online LEGO Shop. 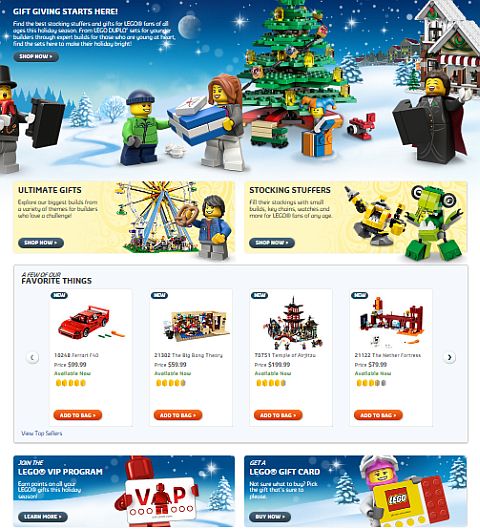 Also, normally the Double VIP Points period is when LEGO fans get the big sets they have been saving up for as you basically end up with a 10% discount on sets that normally never go on sale. There has been a lot of new sets release in the last couple of months! Some of the highlights include the new LEGO Star Wars sets, the new LEGO Ninjago sets, the new LEGO Friends sets, new LEGO Elves sets, new LEGO Scooby-Doo sets, new LEGO Minecraft sets, new LEGO Technic sets and more. Also, don’t forget that the LEGO Dimensions game and sets were just released this month. You can find links to details and reviews at the end of this posts for some of the most exciting new sets.

If you are not sure what to get, a good place to start is the “What’s New?” section of the Online LEGO Shop. Here you can browse all the newly released sets, and you can also sort them by price, narrow them down by category, and more. There is something for both young and old LEGO fans, and both boys and girls: What’s New at the Online LEGO Shop 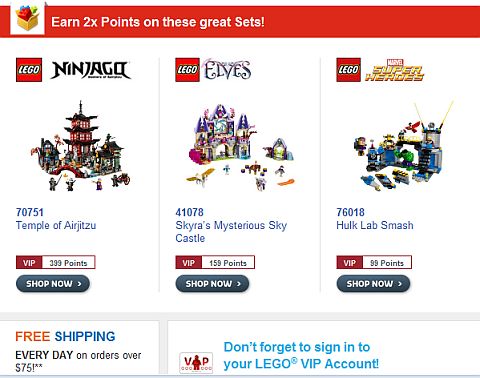 So if you want to take advantage of the extended the Double VIP Point period, and also get the free LEGO Creator Holiday Train, this is the time to fill up your shopping cart. If you like, feel free to share what you are getting in the comment section below! 😉