A few years ago I talked about a few programs LEGO offered that not all LEGO fans were aware of (see links at the end of this post). Some of these programs have been discontinued like the LUG Showcase while others have been augmented like LUGBULK. Recently I received a request that I should revisit this topic with any updates and changes to the program. This sounded like such a marvelous idea that I got to work on writing a new article right away. Here I will cover the basic steps with updated information on what it takes to become a LUG (LEGO User Group) and specifically on how to use the LUGBULK program. So let’s begin. 🙂

➡ WHAT DOES IT TAKE TO BECOME A LUG?

To become an officially recognized physical LUG, the group has to have at least twenty adult members. In addition, to participate in any of community support programs offered by LEGO, they have to have been organized for a minimum of one year, participated in or hosted three LEGO fan events, and have an official website for the group. For the LUGBULK program the number of people in the group will determine the spending limit for that community. Adults members of the group will need a LEGO VIP number to help track participation in the program, even though members don’t earn VIP points on LUGBULK purchases. Using the VIP number is more of a verification system for LEGO that the group didn’t just make up the number of members it has. It should be noted that smaller groups can combine their numbers to participate in the program.

➡ GET A LUG AMBASSADOR FOR YOUR GROUP

While LUGs don’t need an Ambassador to talk to the LEGO Community Support team, if they want to engage in any of the programs available to LUGs, selecting a LUG Ambassador is necessary. From LEGO’s perspective, they can’t do business with twenty individual people in a group because the lines of communication would get inefficient and chaotic. Having a LUG Ambassador streamlines the process and makes it more manageable to have a conversation between each group and the LEGO company. It is the LUG Ambassador (or their designated representative) who will handle all steps of the LUGBULK application every year.

Before getting into the nuts and bolts of the program, I need to point out a few things. Since I live in the US, I’ll refer to things in terms of USD. For this reason, the amounts I will list are going to be estimates. They are not exact because each year there are differences in the exchange rates between DKK and USD. However I should also note that when paying for the order, LUGs can choose what currency they want to pay in. If you follow currency exchanges this can be advantageous. Application for the program usually opens up within the last two months of the year. Ambassadors need to start watching out for it in November.

Sign-ups must be received by LEGO prior to December 1st, and if the LUG is accepted, login credentials will be provided to the Ambassador or designated representative. This person is responsible for processing the entire LUGBULK order, which starts with getting the name, age, and VIP number of all the members who are planning to make a purchase through the program. These have to be submitted to LEGO by December 15th. Based on the information provided, LEGO will determine the spending limit for each LUG who applied. Typically the limit is calculated by multiplying the number of participants by roughly $240. Additionally, LEGO requires a group to buy a minimum of $2,000 in order to make a qualifying purchase. 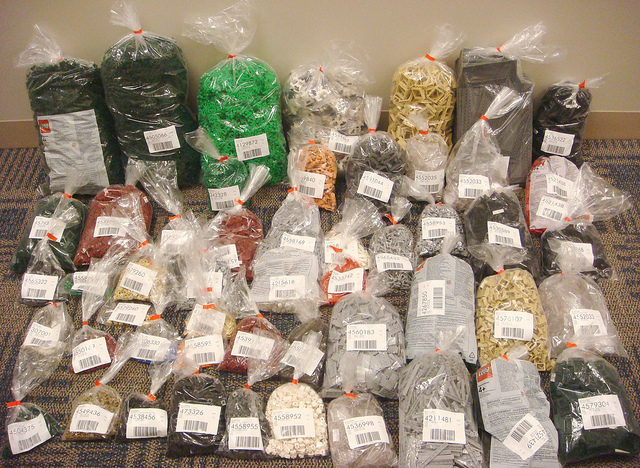 A typical LUGBULK order. This one is by the Greater Midwest LEGO Train Club (www.gmltc.org)

Next comes the piece selection process. LEGO allows each LUG to order up to 85 unique elements. An element will be defined by a specific color and specific shape. So, ordering a 1×2 brick in two colors counts as two pieces. In order to help with this process, the person in charge of handling the LUGBULK application will be given access to a special website that lists all the pieces potentially available, along with their prices. In most cases, if a part is ordered, it must be purchased in lots of fifty. If a part exceeds a value of about $1 then those parts can be ordered as singles. How a LUG selects these pieces is up to members. Generally, the focus is on elements that help LUGs create large public displays.

LEGO gives LUGs until February 1st to get all the selections in place including quantities. From here the process leaves the control of the LUGs, and the orders get submitted to the LEGO warehouse for final verification. For example some elements may become unavailable and get automatically removed from the order. After the final invoice is sent out and paid by the LUG, it becomes a waiting game to see when the order arrives. All orders should be shipped out by LEGO no later than October 30th. Eventually, the shipment will arrive in large boxes. In each box are bagged LEGO elements. It will be up to the LUG to sort out the individual orders from here. Having a member well versed in spreadsheets can really help with the process, along with having an accurate counting scale.

➡ A FEW EXTRA NOTES ON THE LUGBULK PROGRAM

When paying, the LUG will be responsible for shipping and VAT fees/sales tax. A simple way to calculate this is by looking at each person’s total. Start by multiplying this number by 0.17. This is because right about 12% (0.12) is shipping and 5% (0.05) is VAT fees (at the time of this writing). This will give a slightly inflated calculation, but members get a good idea what they are expected to pay individually.

LEGO discourages constant inquiries about LUG orders. Spending time answering questions slows the process down. It is pretty much given that there will be times when a LUG has no idea what is going on with their order. During the initial registration the Ambassador will get a list of rules, as well as a timeline informing the group what to expect when. If the order move past a stated deadline indicated by LEGO, then it is time to ask questions.

Parts available usually are as recent as the year in which the registration opened. For example, the process that begins in 2015 for the 2016 year will probably not have 2016 pieces available, but will have 2015 parts. On the opposite end, parts will go back usually three years unless it is an evergreen piece like a basic brick. No alterations or changes can be made to the order once it has been submitted.

The price of parts is typically based around several factors. First, a part is valued on the quantity of plastic it contains. Second, a part may increase in price if it is a special color. Third, parts that contain high level of detailing – like printing, or special shaping – may increase the price. Finally, if a part is made out of a different material – like rubbery plastic, or cloth – the price will be affected. Ultimately the price boils down to how heavy the item is and how difficult it is to make. And that’s about it…

The LUGBULK program has been around since 2009, and in general the only changes that have taken place in regards to the program involve ways to streamline communication; like having a single point of contact for ordering, and using a special website for part selection. All the waiting is still part of the system and one of the hardest things to get used to. If you would like to have more details you can read the current LUGBULK rules here: Rules for LEGO LUGBULK Program

If you would like to participate in this program, I would encourage you to check with your nearest LUG, and below are some other tips for LEGO Users Groups you might like: