by Thita (admin) on October 4, 2015
in Featured LEGO Creations

Today I wanted to show you a huge LEGO spaceship that was designed and built over the course of a 21.5 hour non-stop building session by four LEGO fans. The ship is over six feet long, contains over five thousand LEGO pieces, five LEGO Power Functions motors, twenty-seven custom wired LED lights, and lots of cool details. 🙂 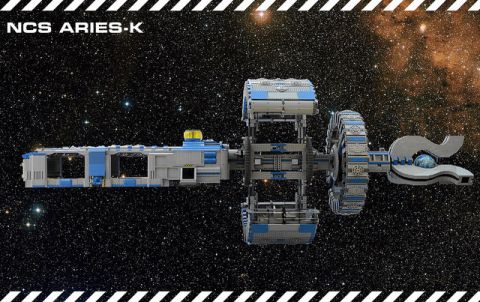 This amazing LEGO spaceship was designed and built by Jason Allemann (whose work we have features here several times – see links at the end of this post), Michael Gale, Kristal Dubois, and Lucie Filteau. Jason shares the following on his website: “If you’re not active in the online LEGO community, you may not be familiar with SHIPtember, wherein participants are challenged to build a large spaceship during the month of September. More specifically, the challenge is to build a spaceSHIP (Seriously Huge Investment in Parts) that must be at least one hundred LEGO studs long. My friend Michael and I have long wanted to participate in this building challenge, but neither of us has been willing to commit the time and effort to it… until now.” 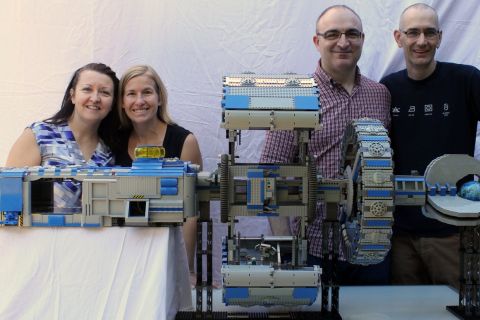 “One of the things that dissuaded us from participating in past years is that building a SHIP in a month typically means saying goodbye to all of your free time for that month. Michael suggested we tighten the timeline, turning it into a 24 hour marathon, and join forces with Kristal and Lucie, with the goal of building a SHIP over 200 LEGO studs long. We started at 9:00 am Saturday morning, with the intention of building for a full 24 hours. Unfortunately, by the wee hours of the next morning it was clear our abilities were becoming severely hampered. Case in point, the core and exterior of the rotating habitat rings (my responsibility) have a bit of an unfinished look to them, and I would have loved to have spent the last few hours flushing out the details of those areas. It just wasn’t happening though. We decided to call it a wrap after 21.5 hours and here is the result, the NCS Aries-K, serving all your minifigs’ needs on their trips to Mars!” 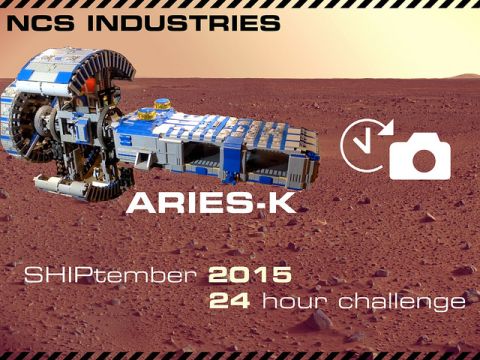 Jason and his friends broke down the key responsibilities on building the ship. Jason worked on the mechanical engineering, rotating rings. Michael was responsible for the hangar bays, bridge, and electrical engineering. Kristal designed and built the engine nacelles and also worked with Lucie on the interiors of the ship. As you will see in the video below, this enormous spaceship has a blue and gray LEGO Classic Space style color-scheme, and it operates with a futuristic fusion engine. The ship also features two habitat-arcs with a medical facility, exercise room, food growing station, research lab, kitchen and dining room, and a lounge area with a clear view of the stars. And the whole thing is motorized to provide lights and rotating functions. It was named the NCS Aries-K. In the video-player below you can find two videos; one featuring the ship, and the other a behind-the-scenes view of the building process. Some key specifications are also below. 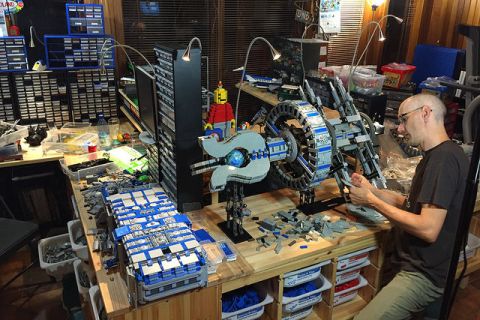 Impressive, isn’t it? Such a massive spaceship! I also really like the work area being so well organized. A room like this is a LEGO fan’s dream! What do you think? How do you like this LEGO spaceship? Did you ever consider building something so big by yourself or with friends? Feel free to share your thoughts in the comment section below! 😉