The LEGO Creator brick-built animals line has been very popular with LEGO fans, and for good reasons. The sets use standard LEGO elements to build cute animals, and they also contain multiple alternate models. In addition, you get introduced to some very interesting and advanced building techniques to shape the various creatures. Once you work with them, you can incorporate these techniques in your own LEGO creations. In other words, these sets represents some of the best features of LEGO; creativity, learning, free-play, alternate models, and a good variety of LEGO elements. 🙂 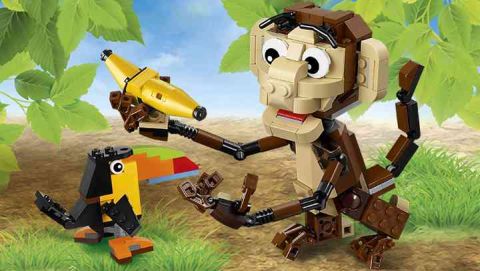 So far there has been four sets released in the LEGO Creator Animals 3-in-1 sets. The #31019 LEGO Creator Forest Animals was released in 2014, and includes a forest monkey with a banana and a toucan as the main model. The monkey’s arms, legs, tail, eyes, eyebrows and mouth are all adjustable to change pose and expression. The set can be rebuilt into a super-cute teddy bear or a squirrel. This set is now discontinued, but you should still be able to find it on the secondary market. It comes with 272 pieces, and the original price was $19.99. 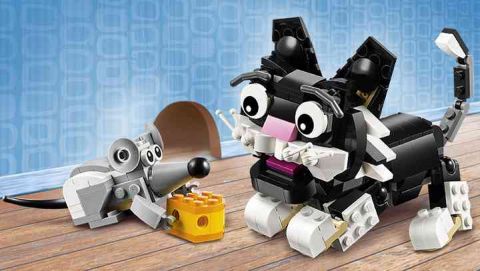 The second set is the #31021 LEGO Creator Furry Creatures, also released in 2014. The main model here is a cat and a mouse. Just like in the previous model, the expression and pose are fully adjustable. The set can be rebuilt into a cute puppy or a rabbit. This set is also discontinued, but you should be able to find it on the secondary market. It comes with 285 pieces, and the original price was $19.99. 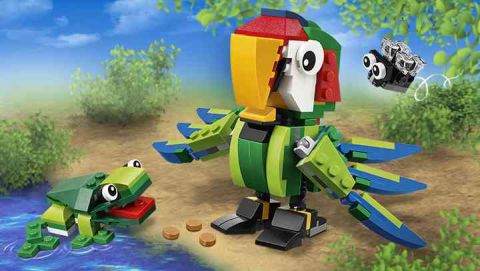 The third set is the #31031 LEGO Creator Rainforest Animals released in 2015, and this is when LEGO fans really started to pay attention. While the previous two sets were definitely well-designed and creative, there is a marked improvement in the level of cuteness. Here the main model includes a delightful and brightly colored parrot with movable wings, feet and eyes, a handsome frog, and even a fly. The alternate models are a pop-eyed chameleon or a tropical fish. Also, the parrot can eat and poop – a feature that kids love. So yeah, a real winner all around. This set comes with 215 pieces, and the price is $14.99. It is still available at the Online LEGO Shop. 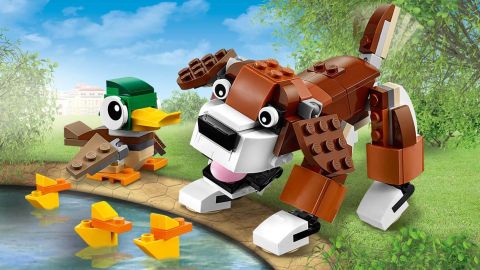 At the beginning of 2016 LEGO released a fourth set, the #31044 LEGO Creator Park Animals. Here the improved cuteness continues, with a puppy and a duck with three ducklings as the main model. The alternate models are a squirrel and a very-very cute owl. In fact, while in the previous sets usually the main model is considered the best, in this set the puppy and owl are head-to-head. So much so, that a lot of people are compelled to buy a second set just to be able to have both the puppy and the owl at the same time. The set comes with 202 pieces, and the price is $14.99. It is currently available at the Online LEGO Shop.

The LEGO Creator brick-built animals line provides wholesome LEGO fun and really great models with an inexpensive price-tag. Personally I won’t bother tracking down the first two sets – if you don’t have them already – because there is a definite improvement with the newer ones. I mainly included the older sets here so you get a full picture of the line. However the #31031 LEGO Creator Rainforest Animals and the #31044 LEGO Creator Park Animals are definitely worth getting. They are just delightful. In the video-player below I have included reviews of the two most current sets by JANGBRiCKS, and I have also added LEGO’s own short animations for all four sets because they are fun to watch. Enjoy!

What do you think? How do you like the LEGO Creator brick-built animals? Do you have any of the sets mentioned here? Which one is your favorite? Do you build your own alternate models for the sets? What other animals would you like to see in the series? Feel free to share your thoughts and discuss in the comment section below! 😉