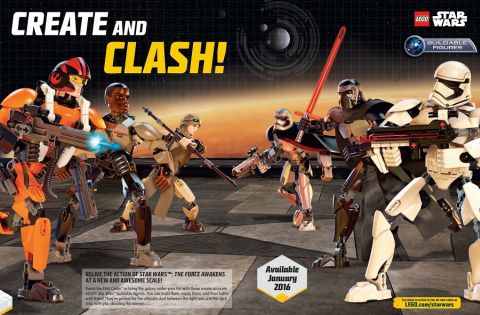 After initial skepticism towards LEGO entering the large action figure market, LEGO fans were pleasantly surprised by the first wave of LEGO Star Wars Battle Figures. The characters are well detailed and articulated with great posability, which made them appealing to collectors. They are also very sturdy and durable – using the same system as the LEGO Hero Factory and LEGO Bionicle characters – which of course means they are great for play. The human faced characters are a bit awkward, as realistic looking facial features don’t blend well with LEGO’s style, but most other brand of action figures are quite creepy too. The helmeted characters however are excellent in every way. And when you set them all up in various battle poses, they all look great. In the video-player below JANGBRiCKS will show you each of the new characters in more detail.

➡ #75113 LEGO STAR WARS REY: Even though this figure has a human face, it actually looks really good. This probably has to do with the fact that the head-wrap is so beautifully detailed. The cloth pieces to imitate Rey’s clothing also look nice. The back of the body is pretty exposed though, which is an issue with most of these battle figures. I think the posability with the long staff is great, although JANG is not so pleased with it. The play-feature of being able to lift the right arm up and down with a knob is quite lame though, and personally I would just remove it. Rey is my favorite character from the new Star Wars film, and I’m happy to see LEGO did a good job both on the large version and the minifig version. Here is the official description: Battle the First Order with buildable and posable Rey! Grab Battle the First Order with buildable and posable Rey!the staff and pistol and get ready to help Rey fight against the First Order. Turn the wheel to swing her arm and send the First Order forces flying! 84 pieces. $19.99 – BUY HERE 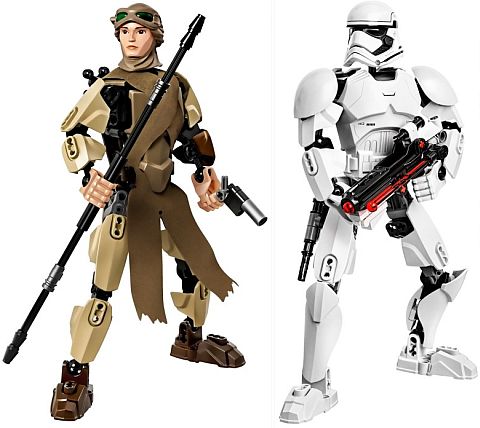 ➡ #74114 LEGO STAR WARS STORMTROOPER: As I mentioned previously, in general the helmeted characters look the best in this large action figure style, and this stormie is one of the best examples. The detailing on the helmet is beautiful, as is the rest of the body armor. And it has a working spring-loaded blaster! Here is the official description: Prepare for battle against the Resistance! Grab the blaster pistol, load the shooter and get ready for action. Can you help the oppressive First Order Stormtrooper overpower the enemy and send them running for cover? That’s for you to decide. 81 pieces. Price: $19.99 – BUY HERE

➡ #75115 LEGO STAR WARS POE DAMERON: This is another character where – although the face is showing – the helmet really balances is out. And just look at how gorgeous that helmet is! I also really like the orange flight-suit, although it is quite surprising that some of the decorations are stickers rather than being printed like on the other figures. Like the stormtrooper above, Poe also has a working spring-loaded blaster. Because this figure comes with more pieces, the price is a bit higher. It does look good (especially the helmet), but I’m not happy that some of the decorations are stickers. Here is the official description: Fight for the Resistance with Poe Dameron! Set Poe in a battle pose, load the shooter and launch a Resistance attack! There’s even spare ammo and a blaster pistol, so get ready to come out fighting. 102 pieces. Price: $24.99 – BUY HERE 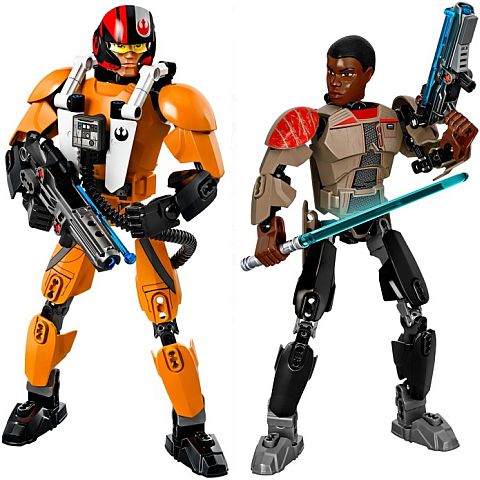 ➡ #75116 LEGO STAR WARS FINN: Finn has the most coverage on the back of his torso, but his legs are kind of too long and too plain. His posability is excellent however, and he comes with two play-features; his right arm can swing up and down with a knob, and his blaster is spring-loaded (I quite like these new blaster pieces). This is also a figure with a higher price-tag, and this may deter some people from getting it. In fact I suspect that Finn will be on sale at some point, as he is not as striking looking as some of the other characters to justify a higher price. Here is the official description: Practice your warrior skills with Finn! Grab your Lightsaber and help Finn defeat any enemy with his amazing arm-swinging battle function! This trained warrior also packs a huge weapon, so those First Order forces had better watch out. 98 pieces. Price: $24.99 – BUY HERE

➡ #75117 LEGO STAR WARS KYLO REN: This is undoubtedly one of the best looking figures in this second wave, kind of like how Darth Vader was in the first wave – so at least in this aspect Kylo is truly following in the footsteps of his predecessor. The cape really gives bulk and a menacing vibe to the figure. Interestingly, LEGO designers also built up the back of the torso behind the cape, and they even used a brand new piece for the upper torso. I definitely recommend watching JANG‘s review above on this figure to see the details. Like on some of the other characters, Kylo’s right arm can swing up and down by a gear at the back. Here is the official description: Go on the hunt for Resistance forces with the fierce Kylo Ren! Join the powerful First Order leader, Kylo Ren, as he strides into battle. Grab the special Lightsaber, turn the wheel to swing his arm and see Resistance forces run! 86 pieces. Price: $24.99 – BUY HERE 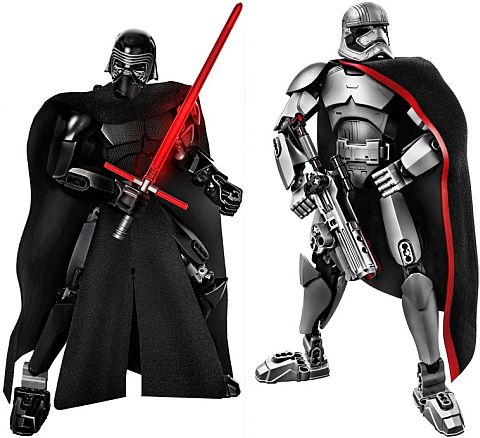 ➡ #75118 LEGO STAR WARS PHASMA: This figure is taller than the other ones with extended leg sections. While the height is appropriate and movie-accurate, it does make the character look unnaturally lanky. However the cape kind of compensates for this, especially when you put the figure in some kind of battle pose. Again, the helmet details are gorgeous, and you also get a working spring-loaded blaster. Here is the official description: Command the troops with Captain Phasma! Give the order to advance. If the Resistance comes close, fire the shooter or leap into battle with Phasma’s cool cape and metallic-look armor. The Resistance is no match for this First Order leader! 82 pieces. Price: $24.99 – BUY HERE

All in all the second wave of LEGO Star Wars Battle Figures are as good looking as the first wave, so if you liked the previous figures, you will be pleased with these ones as well. The posability is really fun to experiment with and you can put the figures into some very impressive stances. I would say that the best looking of the bunch are Kylo Ren and the stormtrooper. Followed by Poe Dameron and Rey. Both Phasma and Finn suffers from too long and skinny legs, but they do look great if you bend the legs and put them in battle poses. All twelve sets from the first and second wave are available under the LEGO Star Wars section of the Online LEGO Shop. 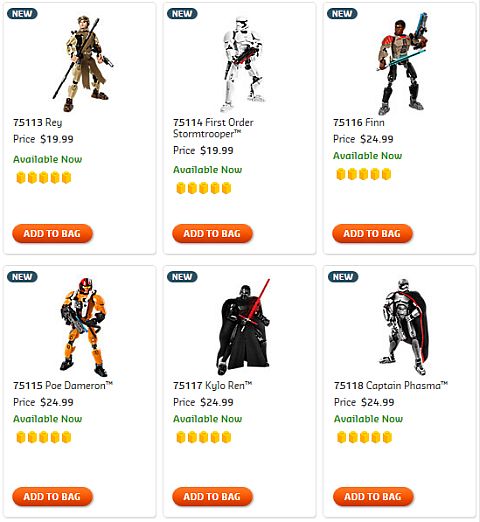 So what do you think? How do you like the LEGO Star Wars Battle Figures? And what do you think of the second wave? Which one is your favorite character? Feel free to share in the comment section below! 😉