by Thita (admin) on February 9, 2016
in Featured LEGO Creations

I first started paying attention to the gallery of Rob D. (a.k.a. agaethon29) when he posted the photo below. It perfectly captures the anticipation and excitement of LEGO Classic Space fans when the #21109 LEGO Ideas Exo Suit was released. (If you have been around here for a while now, you know it is my favorite LEGO set.) The caption reads as follows: “Captain Kayden Knight and a few of his space friends huddle around the computer late at night trying to order the #21109 LEGO Ideas Exo Suit. Fortunately they got lucky and where able to snag one from the LEGO Subspace Network Store.” 🙂 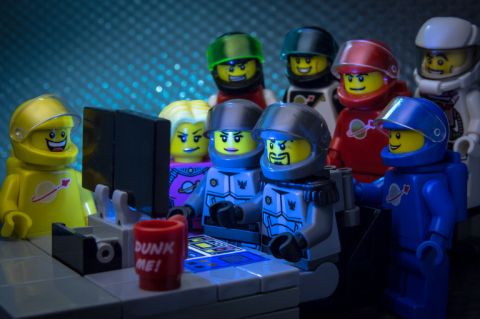 The #21109 LEGO Ideas Exo Suit set created a flurry of activity amongst young and old LEGO Classic Space fans, and for the following months a number of excellent LEGO Classic Space style models were shared at LEGO fan sites, blogs and galleries. Rob continued to impress the LEGO fan community by assembling an updated and upgraded LEGO Classic Space crew. He designed the waterslide-decals for the uniforms himself, taking inspiration from the original LEGO Classic Space design, as well as LEGO Galaxy Squad, Batman’s spacesuit, and the LEGO Collectible Minifigures Series 1 Spaceman.

Rob called his new LEGO Classic Space crew the Nova Team and started to develop a story for them with accompanying photos. The picture below was the first one in the series, posted back in August of last year. Here we see Nova Team’s Captain Knight about to partake in a test flight of the new prototype long-range tactical starfighter, the LL-962 “Arrow” while various engineering and maintenance staff are prepping the craft for launch.

Taking a little detour from the Nova Team, as they travel the galaxy on to their next mission, Rob then introduced us to life aboard the Deep Space Outpost Arcturus (which is still part of the main Neo Classic Space story). Here everyone from military personnel, explorers, scientist and civilians of the Federation live and work aboard the asteroid-based outpost stationed in the frontiers of space. Below are a few pictures from their daily life – again, the photography is excellent, and the minifigures and settings are awesome. 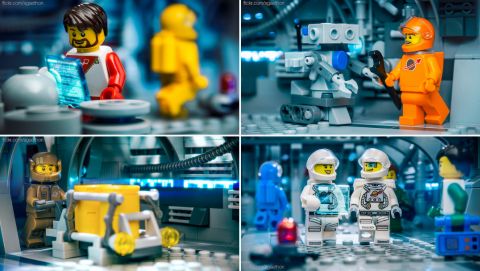 According to Rob’s latest update, the story will now continue with the adventures of the Nova Team, after their sensors detected strange readings from a planet in an unexplored region of space. Members of the team follow the coordinates of the signal, that leads them into a strange cave. With a mix of excitement and trepidation the explorers enter the cave, which is illuminated by an unusual yellow and green lighting powered by some unknown energy source. Rob shares that the color and lightning of this photo was heavily inspired by the interior of Borg vessel’s from Star Trek – in particular from Voyager episodes – which he always found quite eerie with its yellow-greenish lighting and foggy haze. 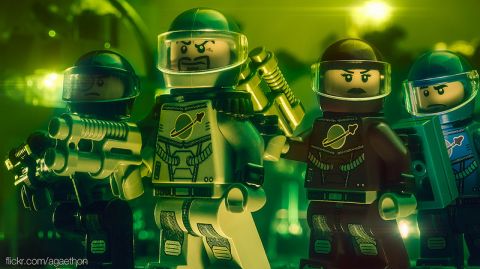 Rob plans to continue the series over the next few weeks, so if you would like to find out what happens with the Nova Team, you can visit Rob’s flickr gallery for updates. I always liked story-based LEGO creations, and Rob’s story with his custom Neo Classic Space minifigs and excellent photography can capture the imagination.

What do you think? How do you like the story, the photography and the Nova Team? Feel free to share your thoughts in the comment section below! Rob is very happy to receive comments and feedback, so don’t be shy. Also, if you like LEGO Classic Space based stories, I highly recommend LEGO Space: Building the Future by Peter Reid and Tim Goddard. It is my favorite LEGO book. 😉