There is a large number of LEGO City sets that were released just a few days ago. We have already discussed the #60134 LEGO City Fun in the Park – City People Pack (see link at the end of this post), because it is one of the most talked about new LEGO sets. And we will review the LEGO City Volcano collection separately, because they make up a whole new sub-theme within LEGO City. However there are a few other new LEGO City sets that are worth discussing. So we will take a look at those today. 🙂

➡ #60132 LEGO CITY SERVICE STATION: While LEGO Creator sets regularly include alternates, this is the first time in a very long while that we get a LEGO City set with an alternate model. And if that’s not enough, the secondary model is also modular, with several smaller sections – giving you even more options for your layout. So yeah, this set is making history! Make sure you check out the video-review below to see all the details and configurations. But the price… oh, dear! 18 cents a piece for a non-licensed, generic LEGO City set, with no special parts or minifigures? I don’t know what LEGO was thinking. While I would say that this set is definitely worth to get due to the pleasing design, good play-features, and alternate models, I would suggest to wait until it is on sale, or you have some kind of coupon, VIP Points, or other ways to bring the price to a more reasonable level. Here is the official description: Build 1 of 2 possible models – a service station or gas station! Decide what you want to be today! Open the service station and start your day as an auto mechanic. Put a car on the lift and repair it, then clean it up it in the wash station. Rebuild the model into the gas station, fill up the waiting cars and send them on their way, then use the tow truck to bring in a broken-down car for repair. With this set you can decide what to build and what you want to do! Includes 4 minifigures: a station attendant, mechanic, tow truck driver and a female customer. 515 pieces. Price: $89.99 – BUY HERE 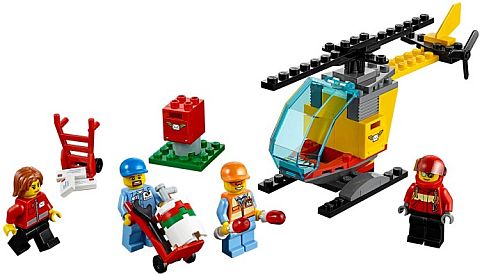 ➡ #60100 LEGO CITY AIRPORT STARTER SET: Four of the new more generic LEGO City sets are related to airports, and this is the smallest one. It’s not as exciting as the larger sets, but the fact that you are getting four very nice LEGO City minifigures, and a helicopter, and other accessories all for $10, makes this an exceptionally attractive small set. Here is the official description: Help get LEGO City’s mail on the helicopter! Be part of the crew with a very important job! Help the postal workers empty the mailbox and get the mail to the helicopter. Load the onboard storage boxes before helping the pilot into the cockpit. Fill up the fuel tank with the gasoline barrel and lead the helicopter to the runway with the guide lights. Send off another successful mail delivery to LEGO City! Includes 4 minifigures: a female postal worker, male postal worker, pilot and airport service worker. 81 pieces. Price: $9.99 – BUY HERE 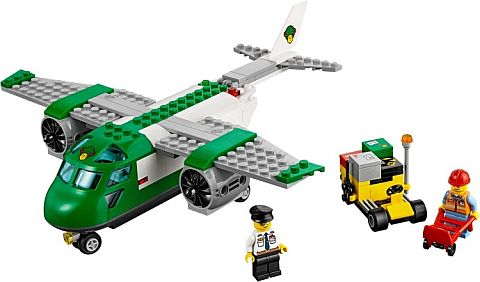 ➡ #60101 LEGO CITY AIRPORT CARGO PLANE: I like the chubbiness of this plane – looks cute, but also useful with a large cargo bay. The price is quite high though for medium-size set, so unless you really need a cargo plane, you might consider one of the other sets. Here is the official description: Load up the Cargo Plane and get ready to fly! Help the pilot and the airport worker get the packages ready for delivery! Use the hand truck to load the packages on the airport service car and drive them to the back of the plane for loading. Fit all the packages in and then make sure the back is closed before letting the pilot know he’s good to go. Take off for some fun package delivery in LEGO City! Includes 2 minifigures: a pilot and an airport worker. 157 pieces. Price: $24.99 – BUY HERE 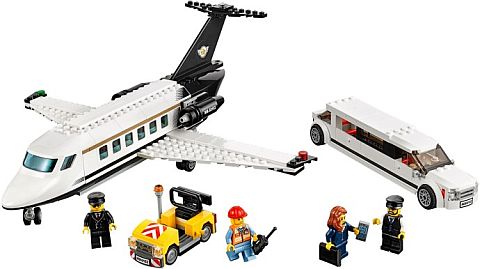 ➡ #60102 LEGO CITY AIRPORT VIP SERVICE: This plane is quite sleek – love the black, white and gold color-scheme. I wish the limo was a bit wider, but I understand that LEGO wanted to keep it in line with other LEGO City vehicles. Here is the official description: Travel to your next business meeting in style! Make sure you have all your important papers packed and ready! Help the pilot get the private plane ready for the next client, who should be arriving shortly. Drive the businesswoman to the airport in the limousine and make sure she gets to her plane on time. Take a seat and buckle up—it’s time for takeoff! Includes 4 minifigures: a businesswoman, pilot, limousine driver and an airport service worker. 364 pieces. Price: $49.99 – BUY HERE

➡ #60103 LEGO CITY AIRPORT AIR SHOW: This is one of the most interesting new LEGO City sets with a collection of three planes, and a simple but great looking hangar. I particularly like the old style propeller plane with great colors, styling and shape. Here is the official description: Head out to the Air Show at LEGO City Airport! Grab your binoculars for a great show! Check out the cool jets and the neat old-fashioned plane before they take off—then watch them do their tricks in the air. Cheer along with the crowd as the planes come in for a landing and head back to the hangar, then join the mechanic and help keep the planes in tip-top shape for the next event! Includes 6 minifigures: male and female jet pilots, male and female stunt pilots, a mechanic and an airport worker. 670 pieces. Price: $89.99 – BUY HERE

If you would like to expand your LEGO City layout, you have some great choices amongst the new LEGO City sets. I would say that the most exceptional set is the #60134 LEGO City Fun in the Park – City People Pack, so I would make that a priority. My second favorite is the #60132 LEGO City Service Station, but as I mentioned above, I don’t think the current price is justifiable. I also quite like the #60102 LEGO City Airport VIP Service with that sleek private plane. And the #60103 LEGO City Airport Air Show can be a nice choice for those who like to collect LEGO airplanes. You can find all these new sets under the LEGO City section of the Online LEGO Shop. 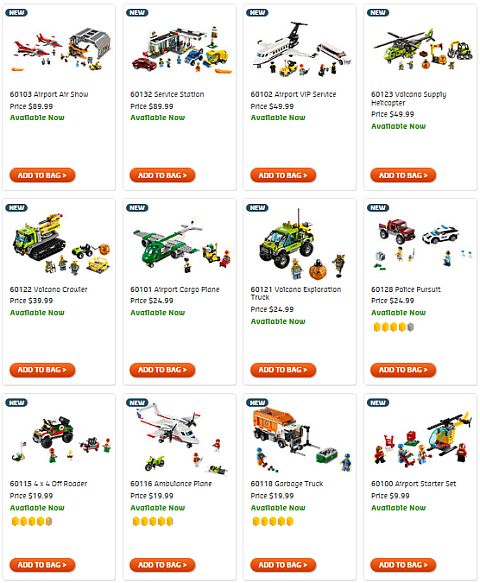 What do you think? How do you like the new LEGO City sets? Which one is your favorite? Are you planning to get any of them? Or did you get some already? Feel free to share your own thoughts and review in the comment section below! 😉