If you are a fan of LEGO Classic Space, you may like the LEGO Lunar Exploration Geological Outpost project posted on LEGO Ideas. It has that sweet LEGO Classic Space light-gray/blue/translucent-yellow color-scheme, plus bumblebee stripes on the ships, and red wheel-hubs on vehicles. The retro look is refreshed by the use of some more modern elements and building techniques, plus plenty of greebling. 🙂 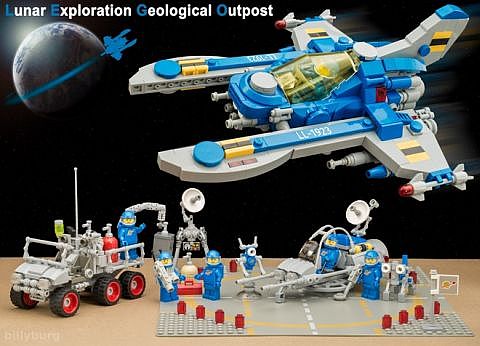 This project was posted by LEGO fan billyburg just a few days ago, and it is already gathering good support. The set includes a spaceship, several land exploration vehicles, and of course a whole crew of LEGO Classic Space minifigs. Below is how billyburg describes his project, and I also recommend visiting his flickr gallery for other sweet LEGO Classic Space creations. 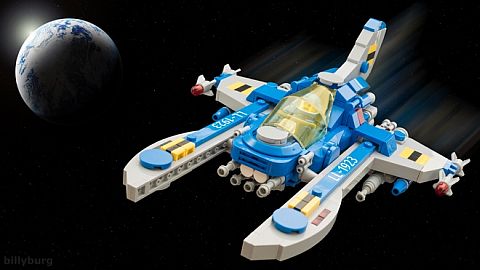 My idea is entitled Lunar Exploration Geological Outpost, and is intended to be a fun self contained play-set. There is a larger Galaxy Patroller spaceship, a six-wheeled Lunar Utility Vehicle, a Lunar Surface Skimmer for zipping across and mapping the lunar surface, a total of six minifigures, a robo-dog, hover-bots, plus other accessories. Including the baseplate, there are just under 800 pieces in total. I think a retail price of £60-65 (or $70-80) should be realistically achievable.

Each model has been developed to be child friendly, and only ‘legal’ LEGO connections have been used to join the parts together. The Galaxy Patroller has been dropped from several feet and it stays virtually intact. It features retractable undercarriage, opening canopy, and removable under-wing stores. It’s fun to play with and is very swoosh-able! 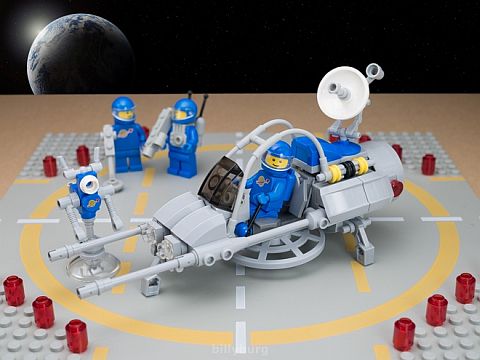 The Lunar Utility Vehicle and Lunar Surface Skimmer are also robustly built. The Utility Vehicle features a detailed seating area, spare air-tanks for the astronauts, tools, working rear suspension, multi-position crane/grappling claw and sides that can be lowered to allow the easy loading of accessories.

The Surface Skimmer features retractable landing gear, a large underside radar for mapping the lunar surface and a positionable rear radar-dish for monitoring the flights of the Galaxy Patroller.

Other accessories include a small transportable radar station, cargo for the Utility Vehicle, a toolbox, and a jetpack for one of the astronauts. The roller-skates and handheld rockets are given to the outpost team to have some fun on their days off. 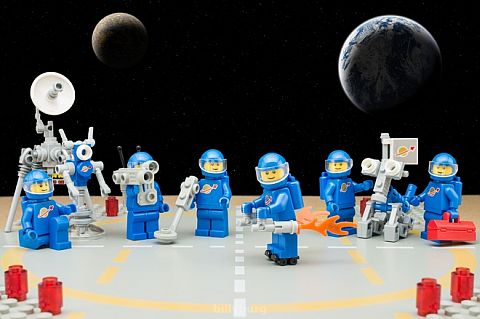 Besides building a really nice LEGO Classic Space set, I like how thoughtfully billyburg considered all aspects of the project; playability, durability, the building experience, price, parts-selection, and more. All LEGO Ideas sets should be submitted with taking these points into consideration. Otherwise LEGO Ideas gets cluttered with unrealistic submissions that will never be made, because they don’t meet LEGO’s criteria and standards. I also like that this is a research-based set, instead of focusing on fighting aliens, space-pirates and other galactic badguys. As far as billyburg’s request to bring back the lunar landing-pad, I doubt it will be fulfilled, but you never now – it was worth a try asking on behalf of all LEGO Classic Space fans… 🙄 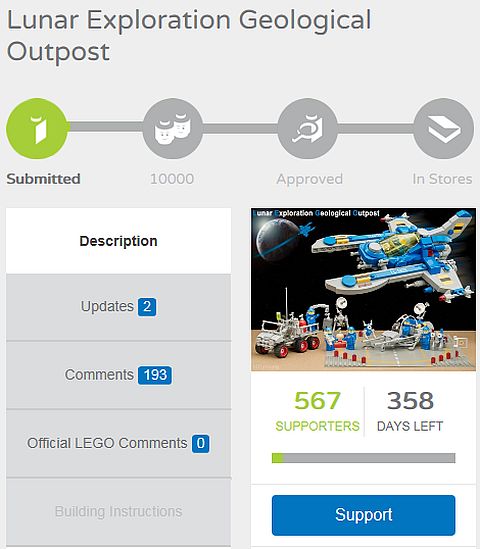 For LEGO to consider turning this project into an actual LEGO set, it will need to receive 10,000 public votes within one year. If you like it, you can vote for it here: VOTE FOR LEGO LUNAR EXPLORATION GEOLOGICAL OUTPOST. And if you have any comments, questions, suggestions or request for billyburg in regards to his project, feel free to share them in the comment section below. And you can also check out the currently available LEGO fan created sets under the LEGO Ideas section of the Online LEGO Shop.

Next post: The greatest villain of LEGO Ninjago contest