A the beginning of the month LEGO released the #75098 LEGO Star Wars Assault on Hoth, the latest set in the LEGO Star Wars Ultimate Collector Series. The set has been receiving a lot of criticism since it was first announced back in February, however after it became available it got some positive feedback also on some of its features. Below I will share with you my own opinion about the set, as well as reviews other LEGO fans. Hopefully this will help you decide if this set is for you or not. 🙂 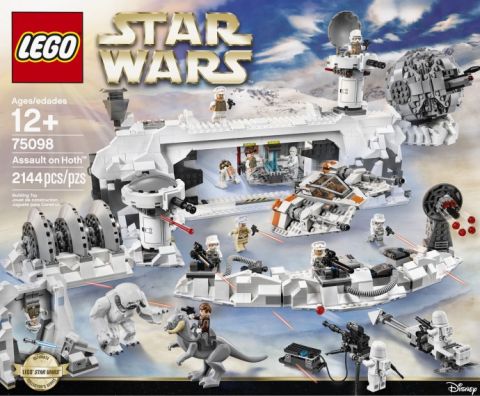 The LEGO Star Wars Assault on Hoth does have some features that we can usually only find in more advanced sets. The landscaping (or I guess we could call it snowscaping) looks very pleasing in my opinion. Other reviewers point out that there shouldn’t be so much rock exposed – which is true as far as comparing the set to the movie – but if we just look at it as a LEGO set, the combination of white snow pieces over the gray rocks is quite nice – especially around the hangar doors. The Wampa cave is nicely snowscaped as well, and looks particularly sweet attached to the main section – giving the base a more substantial and organic look. 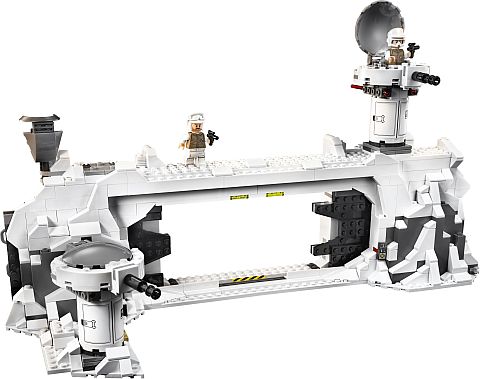 Another feature that indicates a more advanced set is all the interchaneable modules. I think this is a very big plus from the playability perspective and one of my favorite features. You can take the fully built turrets and easily reposition them throughout the base for different configurations, and you can do the same with the Wampa cave and the Tauntaun stable area. I would love to see such a feature added to more sets; no need to fully rebuild the entire model (like in the LEGO Creator line) or a section (like in the LEGO Minecraft sets), but simply move modules around on jumper-plates or reconnect them with LEGO Technic pins. 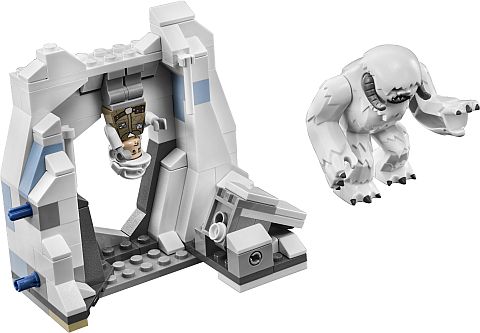 While the base and the trench with gun turrets look nice from the front, some sections of the set look terrible from other angles. The design of the ion cannon in particular baffles everyone who reviewed this set. It is fine from the front and the sides, but from the back it looks awful with all those mismatched colors. The sliding doors of the base also look very bad from the back. It is realistic to have an unfinished and somewhat crude look of a rebel base like this, and the exposed LEGO Technic mechanism achieves this well. However those random light-gray plates on the black doors are just ugly. 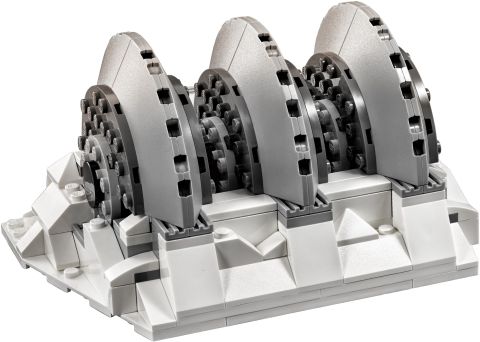 Continuing the list of inaccurate details, the power generator only got three modules instead of four, and there is that strange little lookout tower tacked on the set for no reason. In a playset having such inaccuracies would be forgivable in favor of play-features, but in a $250 Ultimate Collector Series model this shouldn’t be happening. 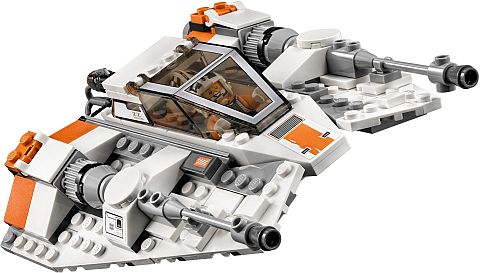 The snowspeeder, speeder bike, and other vehicles and smaller accessories look fine on their own. The snowspeeder needs a really accurate pilot though to fit through those blaster doors! 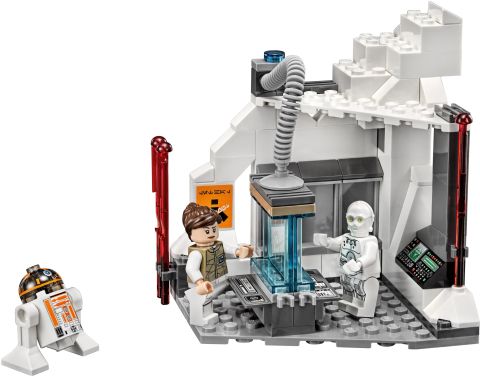 Minifigs included are Luke Skywalker, Han Solo, Toryn Farr, a rebel officer, Wes Janson, Wedge Antilles, K-3PO, 5 rebel troopers and 2 snowtroopers, plus an R3-A2, a Tauntaun and a Wampa. They are all okay – nothing too special, but okay. My favorite are the two droids; the R3-A2 unit comes with a really nice white and orange color-scheme and translucent dome, and K-3PO got lots of upgraded details. 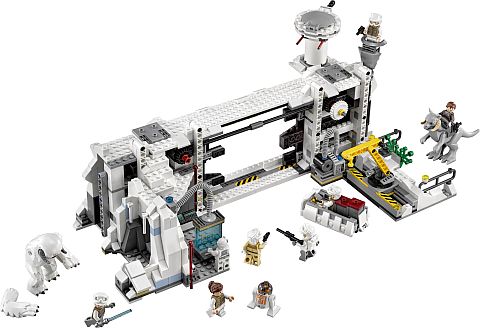 The inside of the rebel base is not nearly as nicely laid out and accessorized as the #7879 LEGO Star Wars Hoth Echo Base from 2011. The sliding crane is okay, and the little control room is fine (although very plain), but while the front of the set is oversaturated with play-features and shooting action and has nice landscaping, the back doesn’t look good, and there is not a whole lot to play with. Again, the 2011 set was much better in both look and play-features, and it was only $90. 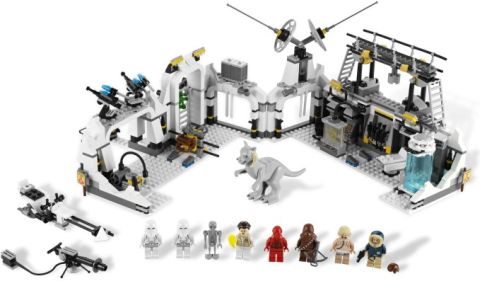 In the video-player below I’m including reviews of the LEGO Star Wars Assault on Hoth by JANGBRiCKS, and The Brick Show. Their reviews are quite similar and quite long, so if you only have slight interest in this set I recommend watching just one of the reviews. However they also make some different points that I think are valuable. I’m also including a build-review by Sariel’s LEGO Workshop to give you a sense of the building process. (You can use the drop-down list in the upper left corner to choose the review you want to watch).  I would also suggest to read the review on Brickset. It is critical, but well thought out, and well written. Between these reviews you should be able to make an informed decision if you are considering to buy this set.

I think the main problem with the #75098 LEGO Star Wars Assault on Hoth is that it’s not clear on its target audience – trying to please everyone, and ending up appealing to none. The price, piece-count and LEGO Star Wars UCS logo clearly targets older LEGO fans. But the lack of accuracy, lack of displayability, and the compromises made to facilitate so many kiddie shooters is turning adults away. On the other hand how many kids have $250 to spend on a single LEGO set? LEGO released many much better Hoth based sets with nicer details and for reasonable prices. The LEGO Star Wars Assault on Hoth is not for collectors who want a nice display piece, not for movie fans who want an accurate model, and is not an affordable set for kids – so who is it for exactly? 😕 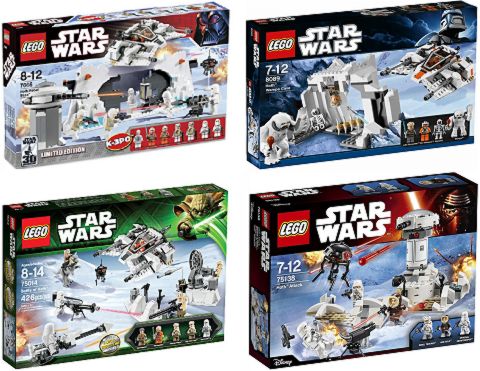 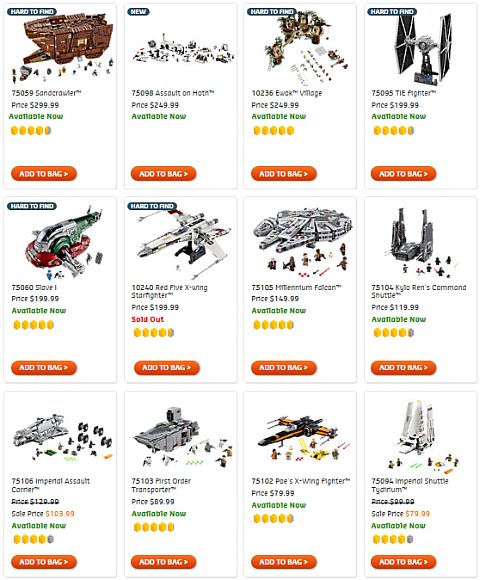 I also thought to mention that there is an interesting endeavor by Reddit user RRR3000, who did a survey on what LEGO fans would like to have in a LEGO Star Wars UCS Hoth set. Based on the feedback he designed his own LEGO Star Wars Hoth Base, using about the same amount of pieces as the official set and will plan to post building instructions as well. See below. It looks so much more grown up than the official set! 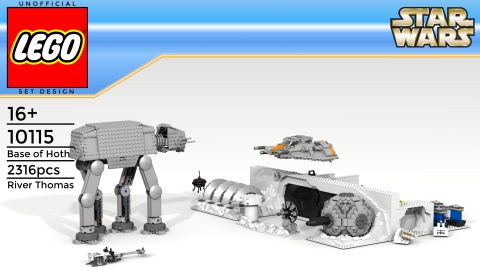 What do you think? How do you like the LEGO Star Wars Assault on Hoth? Do you agree with the negative reviews? Or do you think they are too harsh? Are you planning to get this set yourself? Would you recommend it to others? Feel free to share and discuss in the comment section below! 😉