I recently came across a couple of really interesting videos on the YouTube channel of just2good. He is known for being a very reliable resource of upcoming LEGO sets, but he occasionally also talks about other LEGO related subjects. In the videos I wanted to show you today, just2good features LEGO sets and themes that were never released. Some of these sets were canceled just before production, while others didn’t even make it past the concept stage. It’s interesting to note however that even when a set or theme is scraped, the characters, stories, or part of the design can end up getting recycled into later releases. 🙂 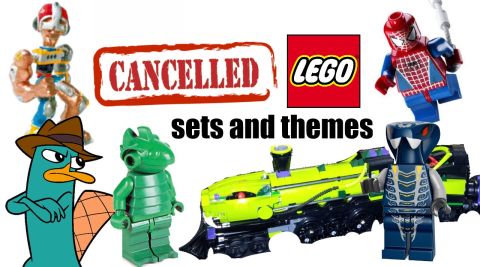 In the video-player below I have included both videos from just2good discussing the topic of unreleased LEGO sets. I have also added a list of sets mentioned by him for your convenience.

The #3868 LEGO Games Phineas and Ferb set was based on the Disney Channel television series, and was scheduled for release sometime in 2012. Building instructions are available online (just search for the set number), but there are no instructions on how to play the game. 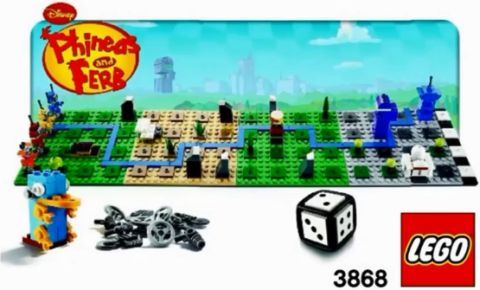 The LEGO Ninjago Serpentine Train was featured in the LEGO Ninjago Masters of Spinjitzu TV series, but the actual set didn’t go past the prototype stage.

The prohibition era LEGO town was a an abandoned LEGO theme concept from the 1980s. The theme was probably canceled due to the topic of gangsters and alcohol prohibition, but the buildings do look really good. 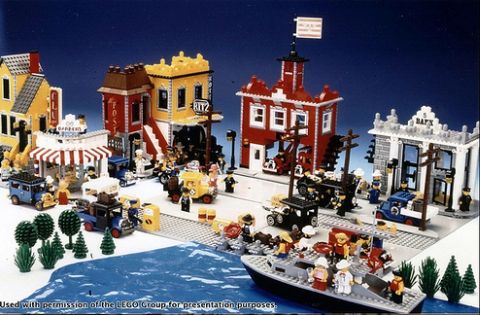 The #1375 LEGO Spider Man Wrestling Scene supposed to get released under the LEGO Studios line in 2002, but it never made it to production. You can read more about it here. 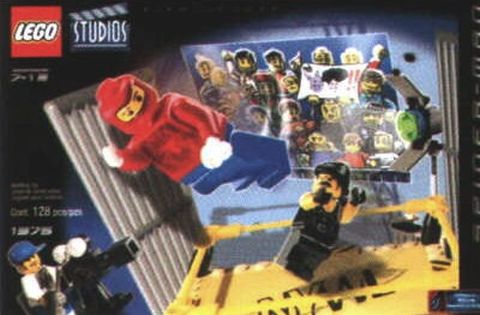 The LEGO Seatron theme would have been under the LEGO Space category, featuring an alien planet with underwater astronauts. Notice that awesome monorail! 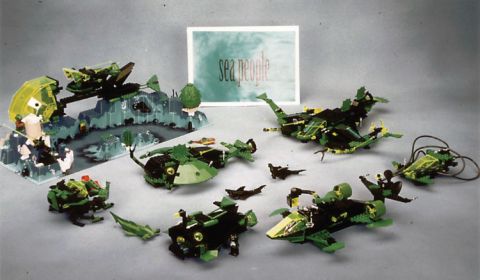 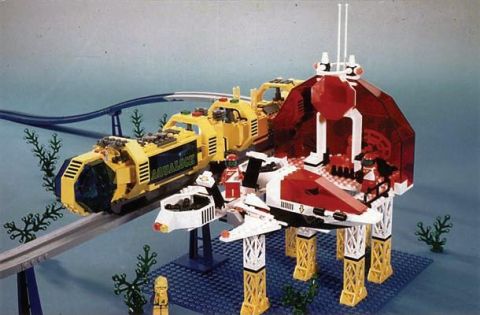 The #3867 LEGO Games Maya Mystica set was scheduled for 2012, but was never released. However the #3920 LEGO Games The Hobbit: An Unexpected Journey is quite similar.

The next sets featured in the first video are from the LEGO Castle line in the 1980s and 1990s, including a couple of medieval village scenes, a castle, a fortress, and dwarf mine. There is a nice discussion about these sets with more pictures on the LEGO Classic Castle forum. 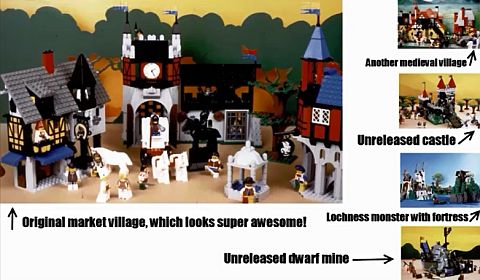 The LEGO CYBOTS theme is particularly interesting because it introduces the first ball-joints, and the developed story itself lived on in other themes. The CYBOTS were robots sent into deep mines to extract energy crystals. Some of the robots malfunctioned and rebelled against their human masters, claiming the debts of the planet as their own – quite similar to LEGO Rock Raiders and LEGO Power Miners stories. You can read more about this theme from the designer himself on his blog. 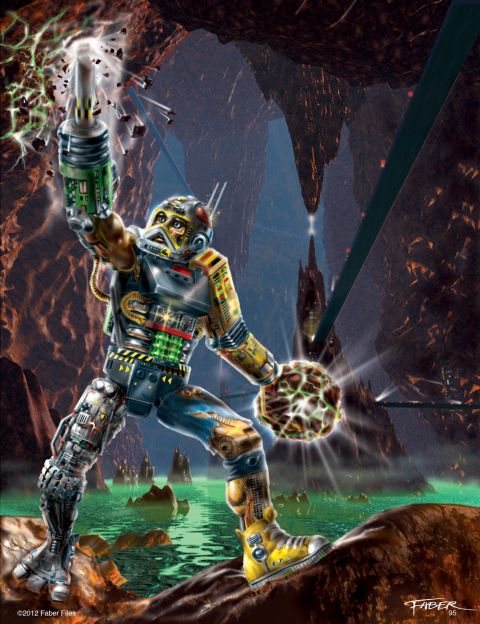 The #6500 LEGO Holiday Village scheduled for release in 1996 was spread out on some nice big LEGO City baseplates, and included a shop, pizzeria, snack bar, and some vehicles. It would have been a perfect starter set for a LEGO City with plenty of room for expansion. 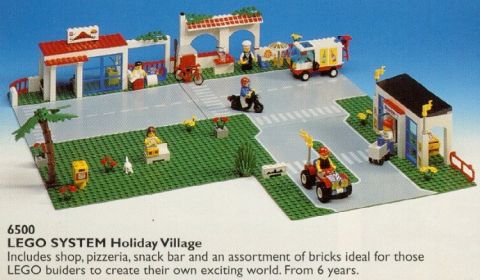 The last canceled theme featured in the first video is LEGO Europa. It contains 18th century European towns, forts, bridges, transportation and of course people, as well as colonial scenes. 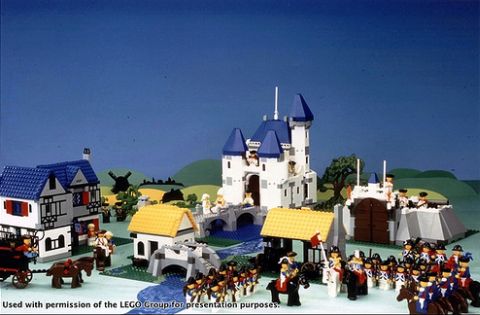 The LEGO Super Heroes constraction figures line may have included a Wolvarine character, according to some concept art shared in the video. 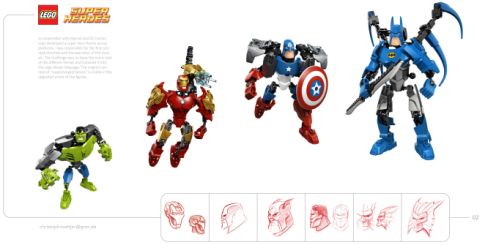 Star Wars is one of the largest and longest standing LEGO themes, so it makes sense that it would have lots of LEGO designers working on various concepts at all times, with many of these ideas never becoming official LEGO sets. A number of them are mentioned, including a Geonosian arena. 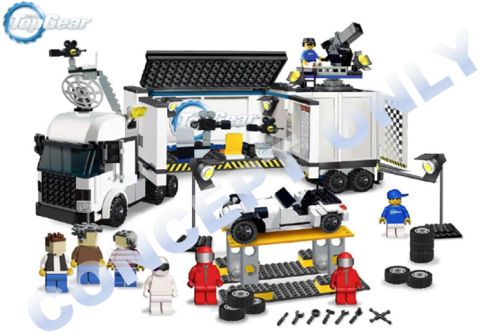 The next set featured in the video is the LEGO Star Wars Yavin IV. I absolutely love this set! Buildings in LEGO Star Wars sets are so rare, and most of them are no more than simply a suggestion of a building rather than an actual solid structure. This one looks so good! Too bad it never made it as an actual LEGO set. You can read more about it in this discussion at Eurobricks. 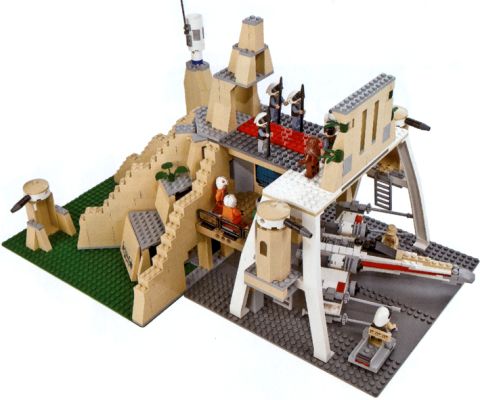 The #380 (Europe) / #571 (USA) LEGO Town Hospital set from 1979 would have been the first hospital in the LEGO Town line. Strangely, hospitals are very rare in LEGO sets, but the newly released crutches and wheelchair seem to indicate that we may be seeing a hospital, or at least a clinic, soon. See more in this Brickset forum discussion. 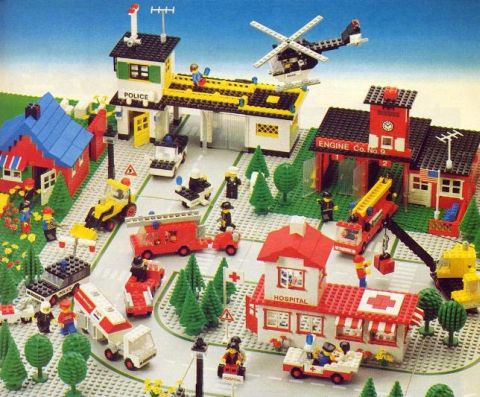 There is a LEGO World Racers set that was apparently planned, but never released. The sets in this theme were numbered as Race #1 – #9, but #7 is missing. This is the only evidence that this set may have existed at some point in the planning process, but was later canceled.

The last unreleased set featured in the second video from the original LEGO Bionicle line is the Sand Tarakava. According to just2good some prototypes made it to the hands of collectors. 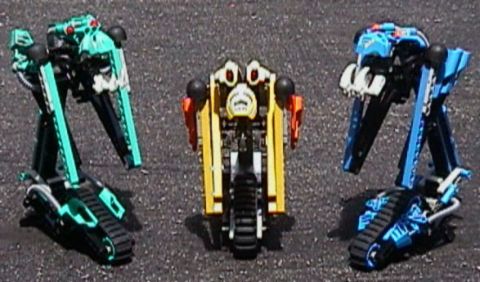 Interesting, isn’t it? Besides the sets mentioned here, I also remember reading about some rumored LEGO Lord of the Rings sets that never saw the light of day. And I’m sure that are a lot more unreleased sets and themes we never even hear about. Also, some sets only get released in a certain country or region, or at a specific event, which makes them very desirable for collectors.

So what do you think? Do you wish any of these unreleased sets and themes got released? Which ones? Are there any other sets you have heard about that was canceled? Feel free to share in the comment section below! 😉