We have already covered most of the new LEGO City sets (see: 2016 LEGO City Summer Sets Review), but I thought it’s best to discuss the new volcano exploration line separately, as this is a whole new sub-theme of LEGO City. The LEGO City Volcano sets are somewhat of a mash-up between the previously released LEGO City Arctic sets and LEGO Power Miners, with six sets in total (plus a small polybag that will be available in July as a promotional item). So let’s take a look. 🙂 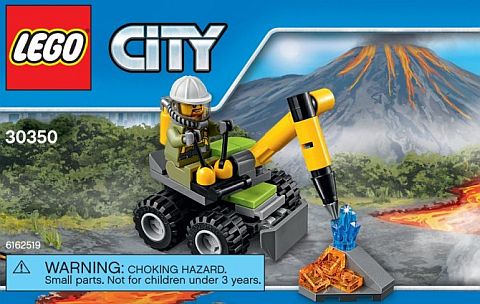 Please note that at the time of this writing only three sets are listed at the Online LEGO Shop. I’m fairly certain that the other ones will be added soon as well, so I included them here for your reference, even though we may need to wait bit to be able to buy them. I’m also adding the video-reviews from JANGBRiCKS, so you can see the sets in more detail. I will update the video play-list as Jang reviews more of the sets as they become available.

➡ #60120 LEGO CITY VOLCANO STARTER SET: This is the smallest in the LEGO City Volcano collection, but it contains a little bit of everything from the larger sets. You get a small ATV in lime-green – the color-scheme for the entire line. You also get one translucent-orange boulder with a crystal inside, which is what the volcano explorers are looking for. The boulder is a new piece, similar to the previous rock element, however instead of splitting horizontally like the rock, this piece splits vertically. The four minifigs included all come with new prints, and most of them are wearing olive-green uniforms unique to this series. This set is a great way to dip into the LEGO City Volcano line, or add it to one of the largest sets to increase the number of explorers. 83 pieces. Price: $9.99 – BUY HERE 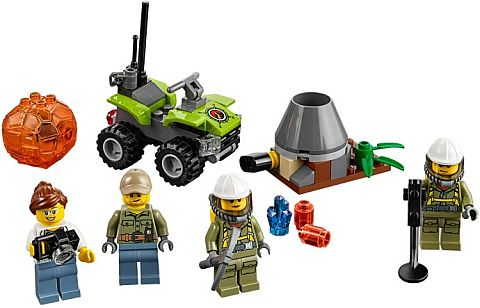 ➡ #60121 LEGO CITY VOLCANO EXPLORATION: Nice chunky little exploration vehicle we got here! The features are also very nice with lots of bars to give the vehicle a rugged look, and the fact that you can switch out the drill to a hook really maximizes the play options. You could easily use this vehicle in other exploration type scenes as well. It’s interesting to note that the handheld mineral detector has been redesigned with no stud on the head piece. Here is the official description: Head off-road and make the big discoveries! Get behind the wheel of the tough exploration truck and head to the volcano site! Move the boulder around then crack it open with the drill. Look, there’s a crystal element inside! Lift it onto the back of the truck and take it back to the lab so you can study it. Includes 2 minifigures: a volcano adventurer and a volcano worker. 175 pieces. Price: $24.99 – BUY HERE 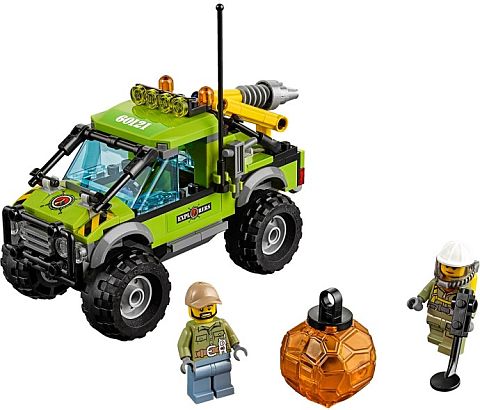 ➡ #60122 LEGO CITY VOLCANO CRAWLER: This vehicle has an interesting feature to crack open the translucent-orange boulder pieces. It also has a clever hidden wheel underneath to keep the tracks moving even on smooth surfaces. You can see both features in action in the video-review above. Still, I feel that this set is not as versatile or interesting as some of the other ones in the collection. Here is the official description: Bring out the heavy machinery to do exploring right! Exploring is hard work! Bring some heavy lifting power to break up the boulder and discover what’s inside. Drive the Volcano Crawler over the rough terrain and use the ATV to move the rocks into position. Use the jackhammer to crack open the boulder and find the hidden crystal element. Discovering cool things makes the hard work fun! Includes 3 minifigures: a female ATV driver, male volcano adventurer and a male volcano worker. 324 pieces. Price: $39.99 – BUY HERE 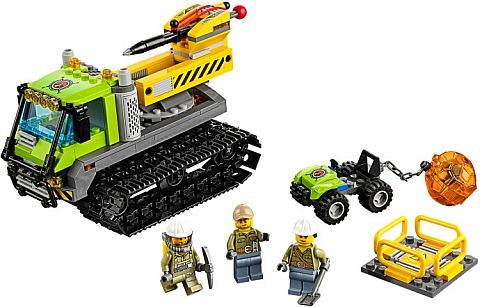 ➡ #60123 LEGO CITY VOLCANO SUPPLY HELICOPTER: I really like this set. The helicopter looks great on the outside and has plenty of cargo space on the inside. The little excavator is perfect, and I like the boulder splitting mechanism. It has a nice machinery look with those Technic beams to create the arm, and the action feature is great too. Here is the official description: Fly in the exploration gear and fly out the crystals! Take science and discovery to new heights with the Volcano Supply Helicopter. Finding more boulders means more crystal elements need to head to the lab. Unload the excavator and boulder opener tool and start breaking open those boulders! Pack the box with the newest crystal element and load it in the back of the helicopter, then spin the rotors and take to the skies one more time, for science. Includes 3 minifigures: a female volcano explorer, male volcano worker and a pilot. 330 pieces. Price: $49.99 – BUY HERE

➡ #60124 LEGO CITY VOLCANO EXPLORATION BASE: This is the first set in the LEGO City Volcano collection with an actual volcano section. Unfortunately this set is not yet available, so it not possible to discuss it in detail. It looks quite similar to the #60035 LEGO City Arctic Outpost set, which I really liked. I will update this section when more information is available about the set. 824 pieces. Price: $119.99 – BUY HERE 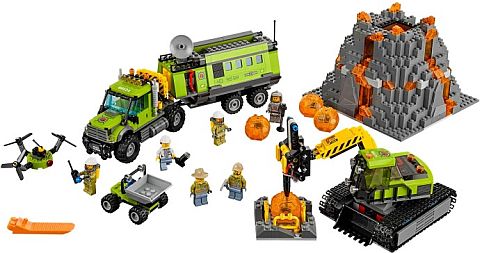 ➡ #60125 LEGO CITY VOLCANO HEAVY-LIFT HELICOPTER: This the largest of the LEGO City Volcano sets, and the second set with an actual volcano section. The most interesting feature I can see here is that the helicopter can pick up two different modules separately – one with a research base, and the other with a boulder splitter. I’m looking forward to see this set in action and will update this section when more information is available. 1277 pieces. Price: ??? – BUY HERE 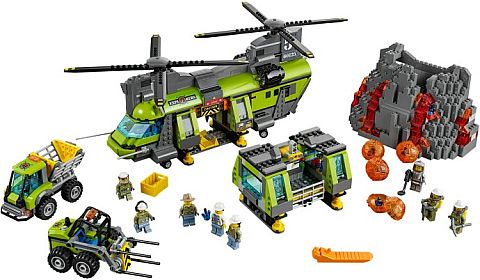 I really liked the LEGO City Arctic sets. It was a good mix of research equipment, vehicles, and even living quarters. The LEGO City Volcano sets are following a similar pattern, just in a different setting and with a different color-scheme. While some people consider this tiring, I think it’s nice to get out of LEGO City once in a while and do some interesting research based activities. I also like the colors, the minifigures, and most of the vehicles. All of the sets have solid designs and good play-features, so if this theme appeals to you, I think you would be happy with any of them. You should be able to find them at most LEGO retailers and also at the LEGO City section of the Online LEGO Shop. 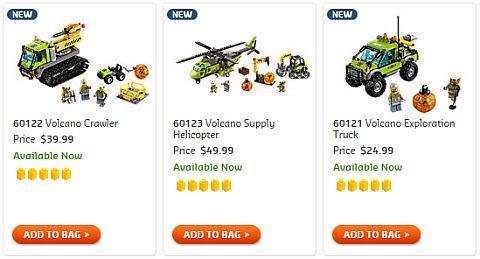 So what do you think? How do you like the LEGO City Volcano sets? Is this a collection you are interested in? Do you have a favorite in the series? Feel free to share your thoughts in the comment section below! 😉

Next post: BlockWash – bags to wash your LEGO bricks!