As we discussed at the beginning of the month, there has been a large wave of LEGO Star Wars sets released for this summer. In this collection most of the sets are quite big and exciting, so there is a lot to talk about. Today we will go through all seven of the new LEGO Star Wars sets. I will share some of my own thought on them, and also get the help of the Brick Show and JANGBRiCKS to show you the sets in detail through their video-reviews. So let’s dive in! 🙂 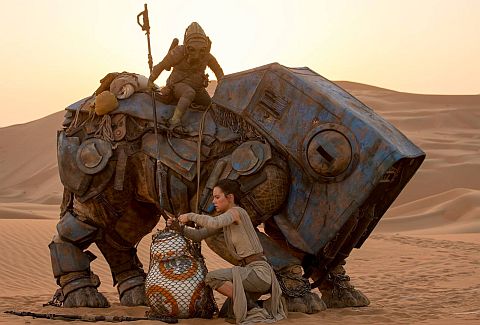 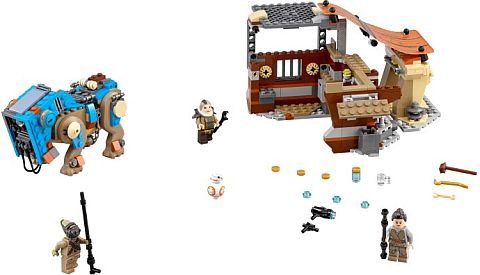 ➡ #75148 LEGO STAR WARS ENCOUNTER ON JAKKU: I love this set! I think the Luggabeast looks phenomenal. It is a very interesting combination of large moulded animal parts and brick-built sections. While some people feel the turquoise color is too bright, it is movie-accurate – just depending on how much Teedo shines up the plating on his transport at any given day. The market stall is also nice with good detailing and color combinations, and the minifigs included are great! Please note that there is an extra minifigure to the set in the form of the old battle droid that could be completed with the included parts. From all the sets this summer this is my favorite. The price is very reasonable too – worth 60 portions. Here is the official description: Stop the thief at Unkar Plutt’s market stall! Join Rey and her companion BB-8 as she trades scavenged parts at Unkar Plutt’s market stall. But look out! Teedo on his Luggabeast is trying to kidnap BB-8! Can you help Rey come to the rescue and stop this little thief from getting away? That’s for you to decide… Includes Rey, Teedo and Unkar Plutt minifigures, plus BB-8 and a Luggabeast. 530 pieces. Price: $59.99 – BUY HERE 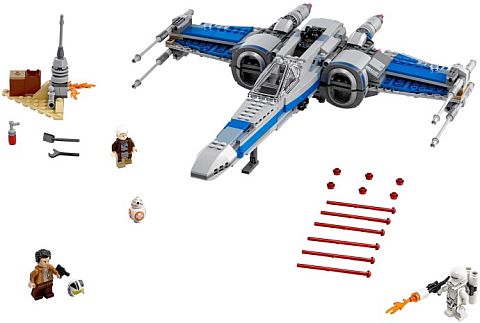 ➡ #75149 LEGO STAR WARS RESISTANCE X-WING FIGHTER: This X-wing is basically a recolor of the previously released #75102 LEGO Star Wars Poe’s X-wing Fighter with some slight differences. While Jang much prefers this version of the X-wing, I like them both, and I think the two together look great. Make sure you check out Jang’s comparison review between the two X-wings in the video-player below. It is very interesting to see them side-by-side. Here is the official description: Protect Lor San Tekka’s home with Poe’s amazing X-Wing Fighter! Help! Lor San Tekka’s desert home is under attack by the First Order Flametrooper! Swoop to the rescue with Poe Dameron in the Resistance X-Wing Fighter with its opening wings and cockpit, 4 spring-loaded shooters, retractable landing gear, removable hyperdrive at the back and detachable BB-8 Astromech Droid. You must help Lor San Tekka before the trooper destroys his home! Includes 3 minifigures: Poe Dameron, Lor San Tekka and a First Order Flametrooper, plus a BB-8 Astromech Droid. 740 pieces. Price: $79.99 – BUY HERE 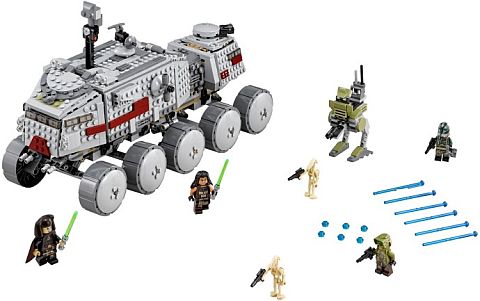 ➡ #75151 LEGO STAR WARS CLONE TURBO TANK: This is LEGO’s latest version of the Star Wars Clone Turbo Tank. It is fully loaded with play-features, and all the armored plates on the outside can be opened for easy access. I’m not so fond of the wimpy looking axles, but they do give the entire vehicle a great range of motion to be able to go over all kinds of terrains. I quite like the little foldable AT-RT. It’s simple, but has a nice shape, good functions, and a great color-combo. Would love to see it in a cheaper set for building a whole army! The minifigure selection of this set is also excellent. Here is the official description: Control the battlefield with the amazing Clone Turbo Tank! At the Battle of Kashyyyk, the Clone Army needs backup! Twist the Clone Turbo Tank to make it turn and roll this 10-wheel monster of a machine onto the battlefield. Extend the observation post to watch out for enemy forces and fire the spring-loaded shooters to force them back. Then fold the sides down to release the mini AT-RT walker and join Luminara Unduli, Quinlan Vos, Clone Commander Gree and the Elite Corps Clone Trooper as they battle the Droid Army! Includes 4 minifigures: Luminara Unduli, Quinlan Vos, Clone Commander Gree and an Elite Corps Clone Trooper, plus 2 Battle Droids. 903 pieces. Price: $109.99 – BUY HERE 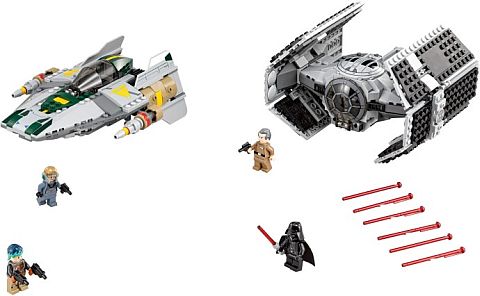 ➡ #75150 LEGO STAR WARS VADER’S TIE ADVANCED VS A-WING STARFIGHTER: This set is from the Star Wars Rebels TV show series, but especially the TIE Advanced easily fits in the main Star Wars universe. What I really like though is the A-wing. It has a really solid starfighter shape that is generic enough to be used even outside of Star Wars. Also, it has some very well-integrated and surprising play-features. I won’t spoil it for you, but you can watch the video-review below if you want to check them out. Here is the official description: It’s rebels vs. Imperials in a deep-space duel! Open the cockpit, load Lord Vader into his TIE Advanced and speed to intercept the rebel A-Wing Starfighter. Fire the spring-loaded shooters when you are in range, but watch out for the rebel craft firing back with its own spring-loaded shooters! Who will win this epic duel between good and evil? That’s for you to decide… Includes 4 minifigures: Darth Vader, an A-Wing Pilot, Sabine Wren and Grand Moff Tarkin. 702 pieces. Price: $89.99 – BUY HERE 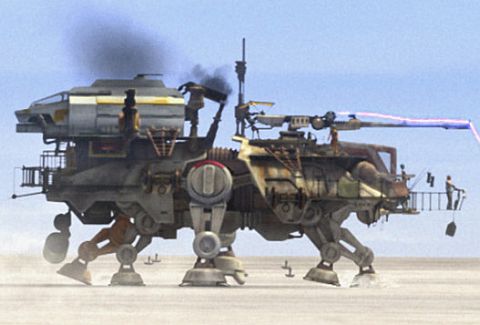 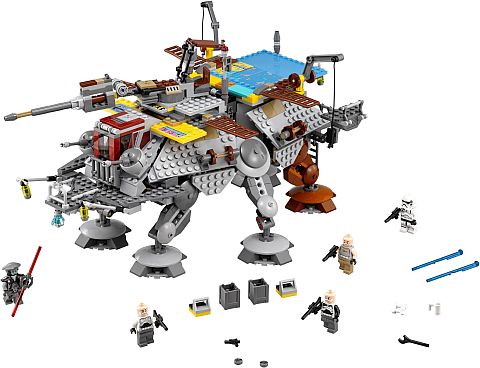 ➡ #75157 LEGO STAR WARS CAPTAIN REX’S AT-TE: This set is also from the Star Wars Rebels TV show series. It you watch the TV show, you know that this vehicles supposed to look big, menacing, sort of steampunk-ish and messy. I think LEGO designers did a great job achieving that. A really nice feature is that you can fit the previously released #75048 LEGO Star Wars The Phantom at the landing platform at the back. While the outside looks great, the inside of the set is somewhat lacking with not much room or play-features. Another thing I don’t like is the number of large stickers. As Star Wars Rebels is mostly popular with kids, they could have a hard time attaching those properly, and also being careful with them while playing. Other than that, this is a boldly designed and very interesting looking vehicle. Here is the official description: Fend off the Empire aboard Captain Rex’s AT-TE! The Imperial Inquisitor Fifth Brother and his Stormtrooper accomplice are trying to board Captain Rex’s modified AT-TE and take control! This old AT-TE might not be much to look at, but it’s got cranes, ladders and a top-mounted gun! Help Rex and his clone friends, Commander Gregor and Commander Wolffe, keep their Imperial foes at bay for as long as it takes. Includes 5 minifigures: Captain Rex, Commander Gregor, Commander Wolffe, Imperial Inquisitor Fifth Brother and a Stormtrooper. 972 pieces. Price: $119.99 – BUY HERE 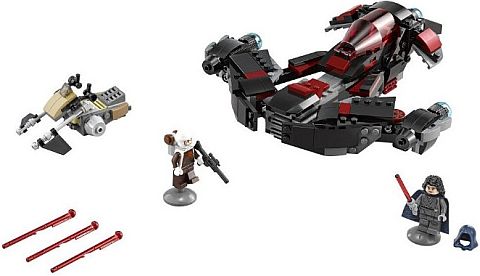 ➡ #75145 LEGO STAR WARS ECLIPSE FIGHTER: This set is from the upcoming LEGO Star Wars The Freemaker Adventures TV series we talked about before (see links at the end of this post). It is also the cheapest LEGO Star Wars set this summer. The Eclipse Fighter has an interesting transforming feature, but other than that there is not a whole lot included with this set. Here is the official description: Surprise the Freemakers with Naare’s transforming Eclipse Fighter! Jump Naare into the Eclipse Fighter and rendezvous with bounty hunter Dengar on his speeder. When he’s not expecting it, transform the vehicle to reveal the hidden spring-loaded shooters! Includes Naare and Dengar minifigures. 363 pieces. Price: $29.99 – BUY HERE 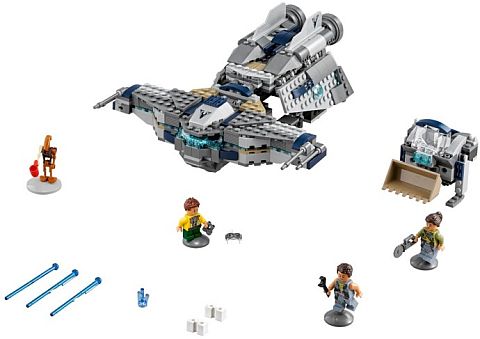 ➡ #75147 LEGO STAR WARS STARSCAVENGER: This is the second set related to the LEGO Star Wars The Freemaker Adventures TV series, and it includes all three of the Freemaker siblings. So if you like the story and the characters, this is really the only set you need to get. The StarScavenger is an ugly ship, but that’s the whole point of The Freemaker Adventures; the scavenger siblings building “uglies”. One of my favorite LEGO Star Wars sets of the year for its originality and ugliness! Here is the official description: Join StarScavenger on dangerous salvage missions! Siblings Rowan, Kordi and Zander are on the hunt for space junk in their starship StarScavenger, and they need your help to recover it. Fold out the engines, load a minifigure and friendly Droid R0-GR into the mini scavenger vessel with salvage scoop and get ready to search for valuable scrap! Includes 3 minifigures: Rowan, Kordi and Zander, plus R0-GR (Roger) the friendly Droid. 558 pieces. Price: $49.99 – BUY HERE 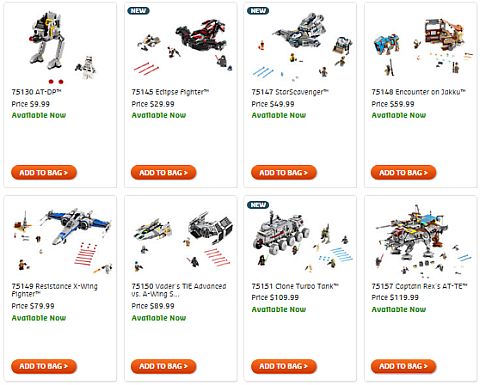 In the video-player below you can find reviews of all seven new LEGO Star Wars sets. You can watch them all, or use the drop-down list in the upper left-corner to select the review you would like to watch.

So what do you think? How do you like the 2016 summer LEGO Star Wars sets? Do you have a favorite? Which one are you planning to get? Fee free to share your thoughts and own review in the comment section below! 😉

Next post: Using pieces from LEGO Minecraft The Village