Having fun with the new LEGO baby

We have already discussed the #60134 LEGO City Fun in the Park – City People Pack (see: LEGO City Fun in the Park Available Now!), and as you know, the set comes with a brand new baby minifigure. The nature of babies is to make people exclaim; “Ohhh! Ahhh! How cute! How precious!” And while this baby is only a little piece of plastic, it has been getting similar reactions from LEGO fans. 🙂

So let’s take a closer look at this adorable little bundle of joy. First of all – just so you can appreciate how tiny the baby is – here is a comparison picture with other LEGO figures. The blue piece on the left is a LEGO micro-figure, used as a trophy, statue, or miniature version of a minifig. Next is the new baby minifigure. The bundled baby comes with the Tribal Woman from LEGO Minifigures Series 15. The next piece is a figure from the now retired LEGO Games series. And the last two are a child minifigure with short legs, and a standard LEGO minifigure.

The baby’s body is one piece; the size and height of a LEGO 1×1 brick. It can be attached to a single stud, like the LEGO Games figure. The arms and hands are not movable, however the hands have the same circumference as a standard LEGO rod, so you can attach a clip to them. The neck-post is also the same as a standard LEGO rod.

The removable head is similar in shape to a standard LEGO minifigure head, but it is much smaller and has no neck section. It can be attached to a standard LEGO rod (so yeah, you can have smiling baby heads on stakes… okay, I agree… that’s too disturbing to think about). The stud on the top of the head is very tiny and smaller than a LEGO rod. So far I haven’t been able to find anything that could attach to it. However the head itself has the same circumference as the head of LEGO Games figure, so if you have one of those awesome and very rare miniature Viking helmets that came in the #3860 LEGO Games Castle Fortaan set, you can put it on the baby. Unfortunately this is the only helmet LEGO ever made for the LEGO Games figures, so no other headgear would fit the baby at this point. 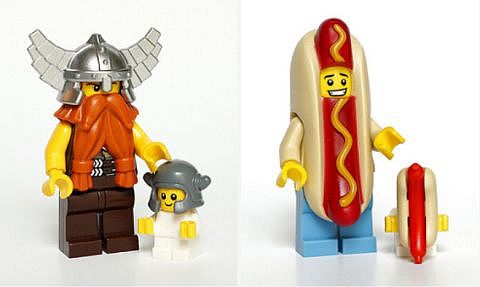 As soon as new LEGO elements become available, LEGO fans immediately start experimenting with them. And the baby is no exception. In the picture above you can see daddy and baby Viking with the tiny helmet I mentioned in the previous paragraph, and daddy and baby hotdog guy with the new small hotdog piece. In the picture below, baby minifig and baby bunny are getting attacked by Slimer. All three images are by flickr member and excellent minifigs photographer Vanjey-Lego. 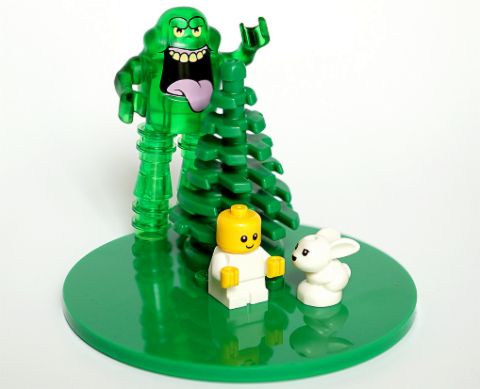 The LEGO baby minifigure is currently only available in the #60134 LEGO City Fun in the Park – City People Pack, but will also be included in LEGO Collectible Minifigures Series 16 coming later this year (with a babysitter). And I’m sure LEGO will add it to other sets as well. If you want to get your own baby, you can find LEGO City Fun in the Park under the LEGO City section of the Online LEGO Shop. 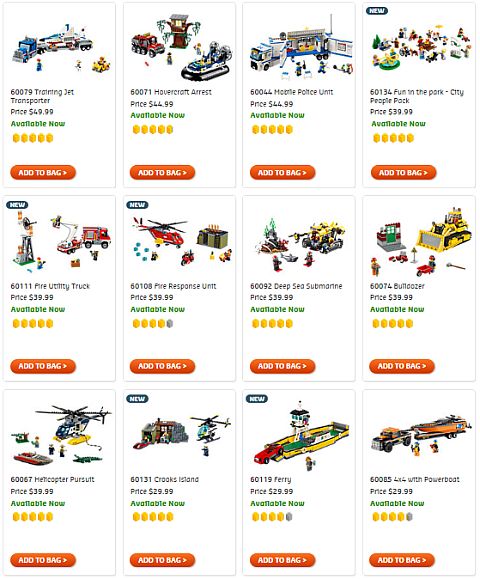 So what do you think? How do you like the LEGO baby? Do you have it already? Have you been experimenting with it? Feel free to share your thoughts in the comment section below! 😉