As we have discussed at the beginning of the month (see: June 2016 – New LEGO Sets & Promotions), a new series of LEGO Mixels characters were released for this summer. Just like it was done with previous series, LEGO Mixels Series 8 includes three tribes with three characters in each. Most LEGO fans get the LEGO Mixels packs for the interesting and useful parts and often unusual colors, but they are also fun little collectible characters. So let’s take a closer look at the three new tribes. 🙂 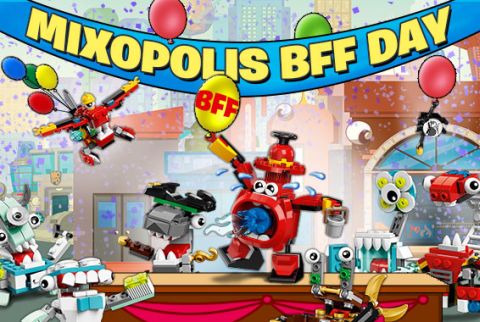 The picture above is from the official LEGO Mixels website, and it includes almost all of the new LEGO Mixels. According to the description they are obviously having a good time: The annual Best Friend Day has finally arrived, and this morning, the citizens of Mixopolis revealed who they regard as their BFF (Best Friend Forever). The title went to Splasho, who was overcome with tears of joy upon hearing the news. “That just proves what a great chap he is”, Skulzy told Mix TV. “He’s got feelings, and he’s not afraid of showing it. What a Mixel”! 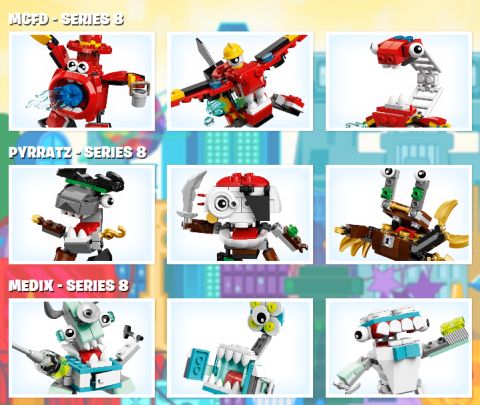 ➡ LEGO MIXELS SERIES 8 – MEDIX: The Medix represent medical workers with a great color-scheme of light-aqua, medium-azure and white. Light-aqua is still a pretty rare color, so from that perspective this is one of the most interesting tribes to collect. For example, this is the first time we get a 1×4 plate – only available with Tuth. And as in previous LEGO Mixels sets, there are several small ball-joints that are very useful for custom LEGO creations. And the characters themselves are funny and creative. Surgeo looks like a surgeon with a giant hypodermic needle, Skrubz got defibrillator arms (this set also includes a little devilish Nixel), and Tuth is a tooth with lots of teeth and a toothbrush. I think kids will really like these.

➡ LEGO MIXELS SERIES 8 – PYRRATZ: These little guys are obviously pirates. Their color-scheme is not as unique as the Medix, but they still have some interesting parts and features. Sharx is sort of a shark with lots of teeth, Skulzy is a skull-pirate with a gold earring and a hiding place for more gold in his left eye-socket (this set also includes a Nixel), and Lewt is a treasure-chest crab (a.k.a. treasure-crab) with plenty of gold coins. These are great little characters to play with and collect.

➡ LEGO MIXELS SERIES 8 – MCFD: The Mixopolis City Fire Department (MCFD) includes Splasho with a big mouth to aim water at fires, the fire-plane looking Aquad, and the fire-truck with an expandable neck called Hydro (this set also include a Nixel on fire). Kids like firefighting related vehicles, so these should be popular as well, even if the colors and elements are not that unique.

If you collect all of the LEGO Mixels characters, Series 8 definitely does not disappoint. It is actually quite amazing that LEGO designers are able to continue producing so many fun little characters without becoming repetitive. Also, as with previous series, there are instructions at the official LEGO Mixels website for mixing up the characters to make bigger Mixels called Mix, Max and Murp (depending on how they are mixed), and of course you can mix them up on your own as well. For those who are just looking for unique elements, the Medix would be most interesting because of the light-aqua pieces. But you can’t really go wrong with any of the Mixels. And with only $4.99 per packet, it is easy to collect them all, or even get multiplies of each set to get more unique elements. They are available at most LEGO retailers and under the LEGO Mixels section of the Online LEGO Shop. 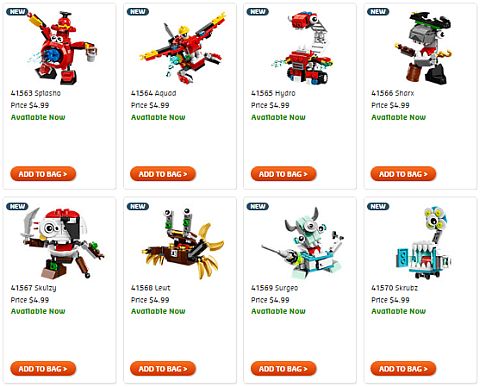 So what do you think? How do you like Series 8 of LEGO Mixels? Are you planning to collect them all? Just get some of them? Feel free to share your thoughts and own review in the comment section below! 😉