Five new LEGO BIONICLE sets were released this summer, and I thought to discuss them today in a bit more detail. BIONICLE got a very dedicated fan-base, both from the time of the original LEGO BIONICLE line, and since the re-launch of the theme. The appeal of BIONICLE is mostly the deep and involved story-line, and also the unique building system. Even if you have no interest in the BIONICLE saga, I do recommend to pick up at least one or two sets just for trying out the building experience. As with all LEGO elements, the pieces do have some connection points to be able to mix them with the regular LEGO building system, and they can provide interesting shapes and textures to your custom LEGO creations. 🙂 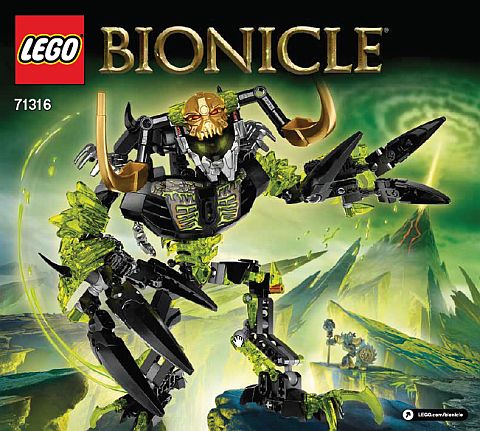 In this wave of LEGO BIONICLE sets we get one set with a good guy, and four sets with villains. We will discuss them all separately. And just like previously, the sets can be mixed up to build combo-models. The official combo-model uses parts from all four villains to create an enormous and very intimidating badguy. There are also two new elements in this wave. One is a crystal shoulder armor piece that looks great, and comes in several colors. The other new piece forms the jaw of all of the villains. While I like the piece itself, I don’t think it works very well as a jaw, and it just doesn’t look right on any of the characters. But let’s take a closer look at all of the sets separately. I’m also including JANGBRiCKS video-reviews so you can see each of the characters, as well as the combo-model in more detail. (Just use the drop-down menu in the upper-left corner of the video-player to select the review you would like to watch, or just let them play in sequence.)

➡ #71312 LEGO BIONICLE EKIMU THE MASK MAKER: I have always been partial to the Mask Maker due to the beautiful gold and translucent-blue color-scheme and nice sculpting of the body-armor and weaponry. And I love the gorgeously crafted Mask of Creation (available in trans-blue and gold)! I like everything about this set, except perhaps that the saw on the shield is not spinning as freely as it should. Here is the official description: Reawaken the powers of the ancient hero and defeat evil! Ekimu has used the Mask of Creation to build powerful armor, and has regained some of his old strength. Swing the mighty Crystal Hammer as you join the heroic Toa in the battle against Umarak the Destroyer and the Elemental Beasts. Fend off their infectious attacks with the Crystal Saw Shield, and save the islanders of Okoto. Features a BIONICLE head with mask pop-off trigger, powered-up Mask of Creation, Crystal Saw Shield, armor chest piece with unique rune decoration and posable joints. Also includes the corrupted Hunter Mask. Stands over 8” (22cm) tall. 94 pieces. Price: $14.99 – BUY HERE 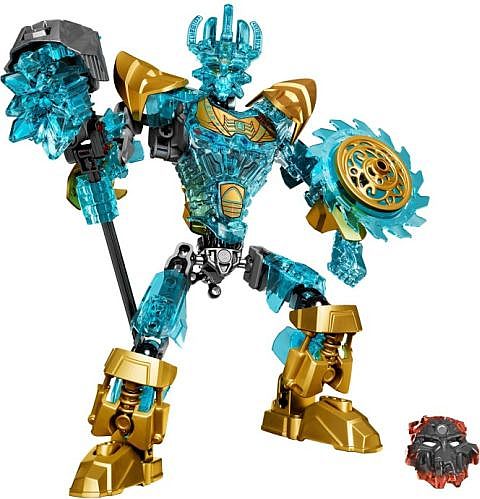 ➡ #71313 LEGO BIONICLE LAVA BEAST: This is another character with a really nice color-scheme. The translucent-orange, regular orange, dark-orange, and various shades of gray and black gives it a fiery look. Good looking character, except for that strange jaw piece that just doesn’t look right. Here is the official description: Fly the Lava Beast into battle and fight with fire! The Lava Beast has been summoned from the dark depths of the island of Okoto to help Umarak the Destroyer fight the Toa. Tahu Uniter of Fire has lost his Unity Mask to the monstrous creature, who can now control fire and use it against his enemies. Launch aerial attacks on the LEGO BIONICLE heroes using the lava crystal wings, swipe at them with the slicing lava blades, but dodge their blows that can pop-off his mask! Features a BIONICLE head with mask pop-off trigger, 2 pairs of slicing lava blades, Beast Mask of Corruption, punchable jaw mask pop-off function, lava crystal wings, armor chest piece with unique corruption decoration, and posable claws and joints. Also includes the corrupted Unity Mask of Tahu. Stands over 8” (22cm) tall. 114 pieces. Price: $14.99 – BUY HERE 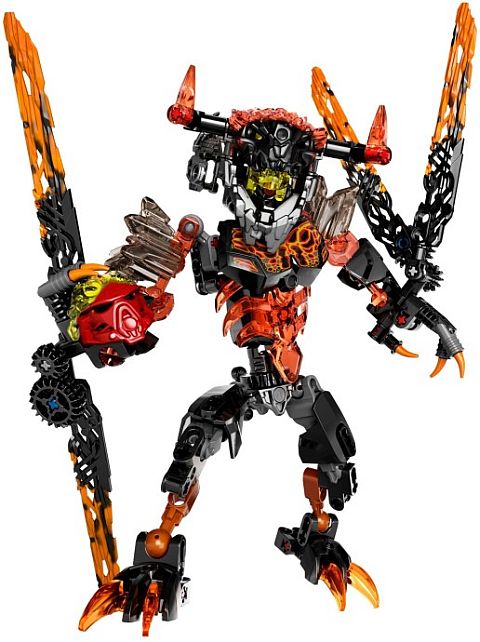 ➡ #71314 LEGO BIONICLE STORM BEAST: This is an interesting character. While it looks plain from the front, it has a very unique mechanism at the back to control the arms, that also doubles as a weird tail. Make sure you check out the video above to see it in action. Here is the official description: Stun your enemies with awesome lightning powers! Summoned from deep beneath Okoto’s oceans, the Storm Beast can create thunderstorms at will. Kopaka the Uniter of Ice has lost his Unity Mask to the villainous creature, who can now control the elements against his enemies. Cause lightning to strike more than once! Zap any LEGO BIONICLE hero who approaches, or swipe at them with the mighty battle tail. Leap out of the water to take enemies by surprise, but avoid the Toas’ blows that will pop off the Storm Beast’s mask! Features a BIONICLE head with mask pop-off trigger, Beast Mask of Corruption, punchable jaw mask pop-off function, armor chest piece with unique corruption decoration, posable joints, and interconnected claws and battle tail that move at the same time. Also includes the corrupted Unity Mask of Kopaka. Stands over 7” (20cm) tall. 109 pieces. Price: $14.99 – BUY HERE 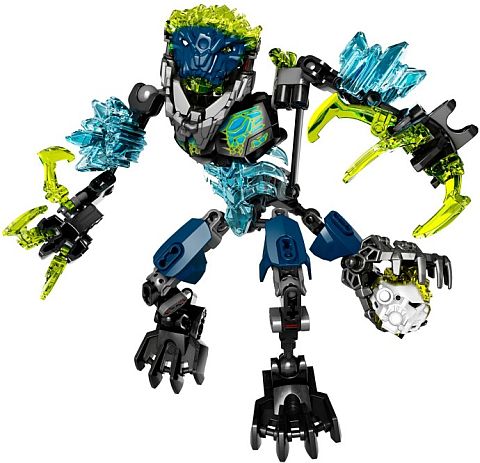 ➡ #71315 LEGO BIONICLE QUAKE BEAST: This is another interesting set with a very asymmetrical character. Here again, I think the jaw just doesn’t look right, but I do really like all the translucent-purple crystal pieces. An unique villain for sure. Here is the official description: Watch enemies tremble with fear with the Quake Beast! Umarak the Destroyer has called on the Quake Beast to help him defeat the Toa. Turn the wheel to activate the punching battle arm, and use the crystal fists to hammer the ground to start an earthquake! Dig into the ground with the powerful claws to set an ambush! Spread fear across the villages of Okoto, but watch for the LEGO BIONICLE heroes and their swinging punches that will pop off the Quake Beast’s mask! Features a BIONICLE head with mask pop-off trigger, Beast Mask of Corruption, punchable jaw mask pop-off function, punching battle arm with a crystal-like fist, armor chest piece with unique corruption decoration, and posable claws and joints. Also includes the corrupted Unity Mask of Onua. Stands over 9” (24cm) tall. 102 pieces. Price: $14.99 – BUY HERE 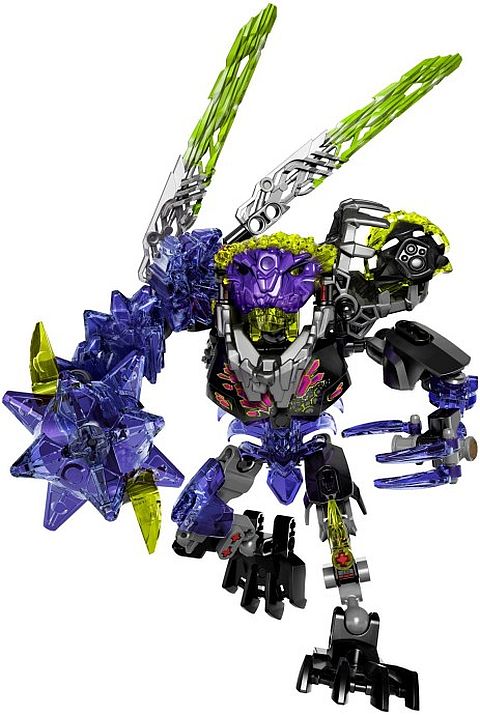 ➡ #71316 LEGO BIONICLE UMARAK THE DESTROYER: This is the largest of the new LEGO BIONICLE characters. The colors are great, but how the head is pushed forward is quite awkward. Also, we have that strange jaw piece again. I really like the construction of the double-jointed feet! Here is the official description: Claw at the enemy and unite the beasts against the Toa! Corrupted by the Mask of Control, Umarak the Destroyer is now summoning an enemy of Elemental Beasts to wage war on the LEGO BIONICLE heroes. Open the claws wide to grab enemies and crush them! This ancient creature will destroy and corrupt everything in its path! Features a BIONICLE head with mask pop-off trigger, Beast Mask of Corruption, punchable jaw mask pop-off function, armor chest piece with unique corruption decoration, posable claws and joints. Stands over 10” (26cm) tall. 191 pieces. Price: $24.99 – BUY HERE 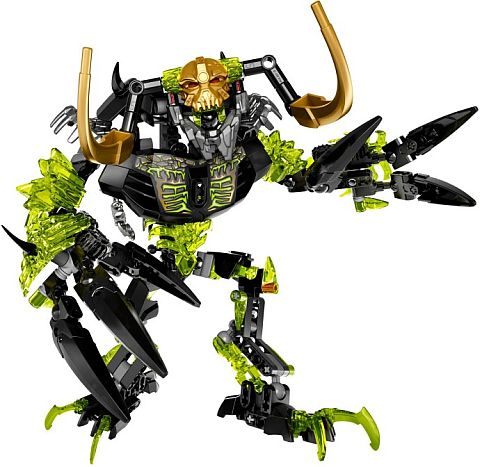 As you can see, LEGO designers did make a good effort by providing a unique look, play-features, and building experience with each character. I think the colors are great, so are the weapons and the mechanisms to move the figures. There are some awkward looking details though, particularly on Umarak, and Storm Beast, and that new jaw piece just doesn’t look right on any of the characters. It is not clear if it is part of the head or the torso, and doesn’t help to shape either. It reminds me of the look of some of the messier designed LEGO Hero Factory Brain Attack villains. But of course – like with all LEGO sets – if you don’t like something you can just redesign it yourself. You can find all the new sets (along with some of the older ones) under the LEGO BIONICLE section of the Online LEGO Shop. 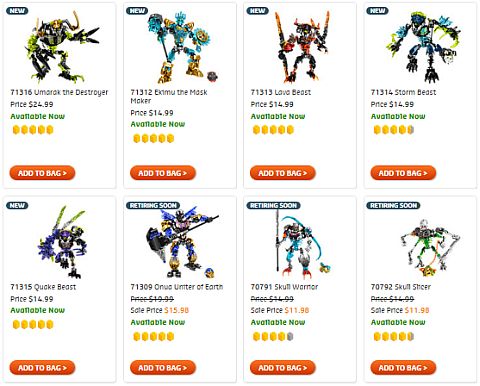 What do you think? How do you like the new LEGO BIONICLE characters? Do you have a favorite? And what do you think of the giant combo model? Do you like to build with BIONICLE elements? Feel free to share your thoughts and own review in the comment section below! 😉