While LEGO Minifigures Series 16 was originally scheduled for release in September, they are already available at various LEGO retailers and the Online LEGO Shop. No official explanation was given for this change, however various sources have been mentioning that LEGO may be reissuing the LEGO Collectible Disney Minifigures in September to coincide with the release of the #71040 LEGO Disney Castle. Both Series 16 and the Disney Series are excellent, so all of this is good news for LEGO fans. 🙂 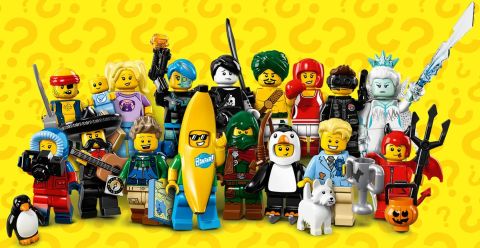 As this is a brand new series with an earlier than usual release, I’m also going to include for you the video-review by JANGBRiCKS, so you can take a close look at each character. Then we will discuss how to identify them in the blind bags. 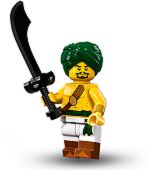 ➡ LEGO Minifigures Series 16 Desert Warrior: The best way to identify this minifig is by locating his scimitar. It is a wide, and bit flimsy blade, that is a bit hard to find due to its flatness. However once you do find a blade, the only other minifig with a sword is the Pirate, which helps with narrowing down the options. Keep in mind that the Ice Queen also got two blade-like accessories, but she also comes with a slope-dress that is very easy to identify. 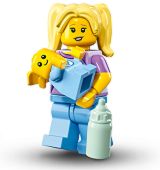 ➡ LEGO Minifigures Series 16 Babysitter: The best accessory to search for to identify this minifig is the baby-bottle. It feels like a thin, tall, and slightly indented mug. If you are familiar with the baby from the #60134 LEGO Fun in the Park – City People Pack, you might feel for that too, but in my experience it is quite difficult to identify (keep in mind that the baby comes in two pieces; a tiny body and even tinier head). If you think you found the bottle, you can further verify the babysitter by identifying her hairpiece. 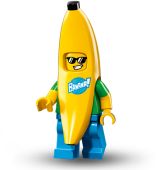 ➡ LEGO Minifigures Series 16 Banana Guy: The banana costume is a very large piece, similar to the hotdog costume from LEGO Collectible Minifigures Series 13. It is also the largest piece in Series 16, so it is easy to identify. It feels a bit curved and bulges through the bag. This is a very popular minifigure, so it will likely become hard to find. 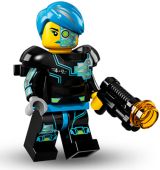 ➡ LEGO Minifigures Series 16 Cyborg: You may run across the armor piece first, but do to the strange shape, it is not the most ideal piece for identification. Instead, it is best to look for the double-barreled handgun. If you think you found it, you can further verify by locating the small 1×1 round plate. If you got both of those, you have the Cyborg. 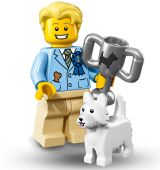 ➡ LEGO Minifigures Series 16 Dog Show Winner: Go straight for the trophy, as it is the easiest piece to identify. If you are unfamiliar with its shape, it feels like the LEGO goblet, but with a couple of handles added to the sides. The dog is a brand new design, so it may be a bit hard to identify. However it is very cute and should make this packet popular. 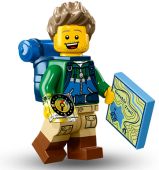 ➡ LEGO Minifigures Series 16 Hiker: Start by locating the 2×2 tile used for the map. Then look for the 1×1 tile used for the compass. You can also try feeling for the backpack, but it is a new piece, so your fingers might get confused by the shape. Locating both of the tiles is a faster and more accurate way to identify this minifigure. 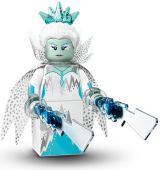 ➡ LEGO Minifigures Series 16 Ice Queen: This is the easiest minifigure to identify in the series; find the dress-slope and you are done. No other minifig comes with a similar piece, so you can’t mix it up with anything else. You don’t even have to worry about trying to identify her other accessories. A beautiful minifigure indeed. 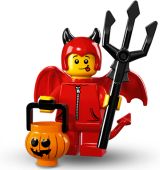 ➡ LEGO Minifigures Series 16 Cute Little Devil: This little costumed character comes with quite a few accessories. The easiest to identify is probably the pitchfork. Other options are the bucket-handle and the wings. However you are less likely to go wrong if you focus on finding the pitchfork first, as there are no other pieces in the series to mix it up with. 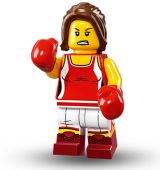 ➡ LEGO Minifigures Series 16 Kickboxer: This minifigure comes with a 1×1 round brick to hold up her headgear when she is not wearing it. If you find this piece, you can further verify by checking her torso and feeling for the bulky gloved hands. Consequently, you can also look for her long ponytail, but I recommend finding the 1×1 round brick first as it is an easy and familiar shape. 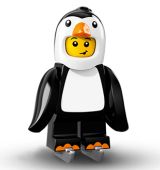 ➡ LEGO Minifigures Series 16 Penguin Boy: I would suggest to start out by finding the short legs. The only other minifigure with short legs is the Cute Little Devil, so all you need to do is tell them apart by the accessories. You can also look for the unique penguin arms on the torso. The skates are also unique, but they are very small and there are other similar small pieces in the series. 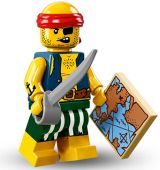 ➡ LEGO Minifigures Series 16 Scallywag Pirate: Find the 2×2 tile first used for the map. From there you just need to make sure it is not the Spooky Boy’s book, or the Hiker’s map. So look for the Pirate’s cutlass. It is quite thin, but it does have a hilt that has a bit of shape to it. Remember not to mix it up with the Desert Warrior’s scimitar. 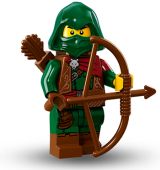 ➡ LEGO Minifigures Series 16 Rogue: The quiver seems to be the easiest accessory to feel for to find this minifigure. The bow is also a decent choice, but the quiver’s shape is much simpler to work your fingers around. The headgear is a brand new piece, and it is too similar to other accessories to positively identify. 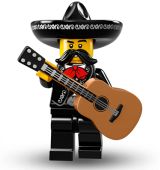 :arow: LEGO Minifigures Series 16 Mariachi: I originally thought the guitar would be the quickest way to identify this minifigure, but it turns out the sombrero is much easier. Just look for something large and round. There is no other similar piece in the series, so you can’t mix it up with anything else. The guitar is an excellent new accessory that should be very popular. 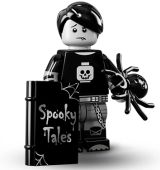 ➡ LEGO Minifigures Series 16 Spooky Boy: The book is probably the easiest piece to look for. When open, it feels similar to the minifig stand that comes in each pack, so see if you can bend it to close. Or it might be already closed in the pack. Once you find the book, you can further identify by checking for the spider. It feels somewhat similar to a small LEGO bat. 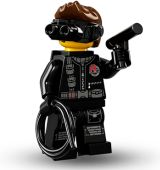 ➡ LEGO Minifigures Series 16 Spy: This minifigure comes with a lot of angled accessories. The gun is a bar with an angle, and so is the neck-bracket. However neither of them are particularly good for easy identification. Instead, look for the coiled rope, which is the most unique accessory for this minifig. From there, search for the special googles. It is shaped like a “C” with some extra texture at the center. I found this minifigure rather common in the series. 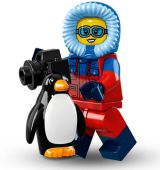 ➡ LEGO Minifigures Series 16 Wildlife Photographer: The camera is probably the best accessory to look for. It is small, square-ish, and can’t really be confused with anything else in the series. You can do some additional verification by locating the 1×1 round plate used as the camera-lens. The small penguin and the hood feel interesting, but due to their complexity they can make identification slow and difficult. So it is best to stay with the simple pieces. 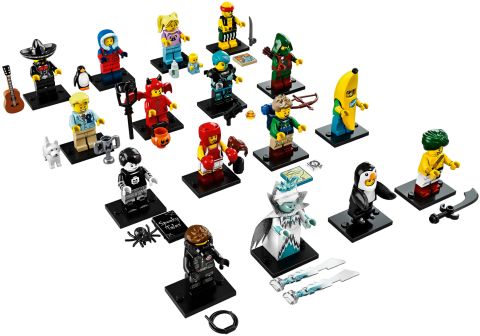 Hope this helps with hunting for the LEGO Series 16 minifigs! They should be available at all LEGO retailers and are also listed at the Online LEGO Shop. If you have your own tips and tricks on identifying them feel free to share in the comment section below! 😉