A whole wave of LEGO Nexo Knights sets were released at the beginning of the month, including some very impressive sets, so it’s definitely worth taking a closer look. LEGO Nexo Knights is a mash-up of LEGO Castle and LEGO Space, and is characterized by really interesting looking war-machines in a futuristic color-scheme. 🙂 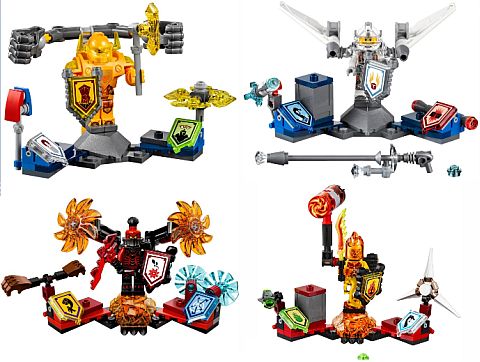 ➡ #70318 LEGO NEXO KNIGHTS THE GLOB LOBBER: As far as regular LEGO Nexo Knights sets, this is the smallest one – the same price as the LEGO Nexo Knights Ultimate Knights sets. It comes with two minifigs and a tiny but menacing looking war-machine that is shaped like a crossbow. Here is the official description: Get ready to lob Globlins at the enemy! The Lava monster is attacking the kingdom! Roll the fearsome Glob Lobber into position and fire the Globlins at the Royal Guard. Overcome the protector of the realm of Knighton and lay siege to the castle with this small but powerful crossbow-shaped vehicle featuring 2 Globlin flick missiles. Includes 2 minifigures: a Flame Thrower and a Royal Guard. 95 pieces. Price: $9.99 – BUY HERE 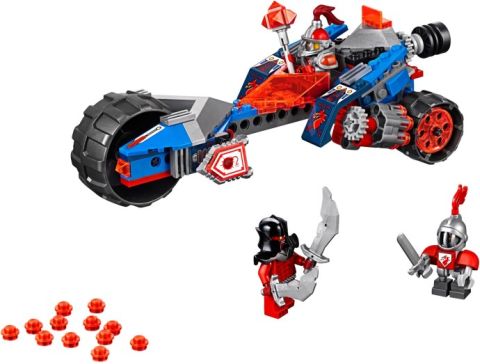 ➡ #70319 LEGO NEXO KNIGHTS MACY’S THUNDER MACE: The shape of this vehicle mimics Macy’s mace, and comes with some serious fire-power. It could be added to some of the larger sets for additional play-value, and it is also a source of many interesting parts. Here is the official description: Storm into battle with Macy’s Thunder Mace! Take the enemy by surprise! Twist the handle to pop up the Thunder Mace’s hidden rapid-fire stud shooters. Take aim and target the Crust Smasher, then jump out of the vehicle with the trusty Macy Bot, grab the Photon Mace and continue the battle! Includes a scannable shield for the Nexo Power Bomb Blast. Includes 3 minifigures: Macy Halbert, a Macy Bot and a Crust Smasher. 202 pieces. Price: $19.99 – BUY HERE

➡ #70320 LEGO NEXO KNIGHTS AARON FOX’S AERO-STRIKER V2: I quite like this set! It is shaped like a cross-bow and can be used both by minifigs as a flying vehicle, and by humans children as a cross-bow while acting out some of the battle-scenes from the story. A brilliant idea in my opinion. The detailing and stickers also work well here. I think it is at this size and price-range when LEGO Nexo Knights sets start to get really interesting. Here is the official description: Hit the bullseye with the 2-in-1 Aero-Striker V2! Immerse yourself further into the futuristic world of LEGO Nexo Knights with the awesome Aero-Striker V2, and transform into Aaron Fox using the 2-in-1 flyer as a crossbow! Role-play battles against the Lava monsters as you squeeze the trigger to shoot the dual spring-loaded shooters. Then pitch Aaron against the winged Ash Attacker and fire the crossbow shooter, or eject the knight in his arrow-shaped flyer and let the Aaron Bot take control! Includes scannable shields for 2 Nexo Powers: Ice Rain and Target Blaster. Includes 3 minifigures: Aaron Fox, an Aaron Bot and an Ash Attacker. 301 pieces. Price: $29.99 – BUY HERE 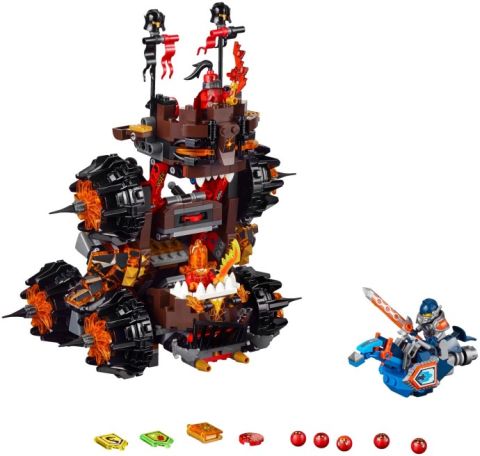 ➡ #70321 LEGO NEXO KNIGHTS GENERAL MAGMAR’S SIEGE MACHINE OF DOOM: While the knights’ vehicles sport a futuristic blue and translucent-orange color-scheme, the badguys’ war-machines are more traditional with brown elements to replicate wood, and translucent-orange to add lots of fire! It is interesting how LEGO designers were able to use the same translucent-orange to represent both cool futuristic details, as well as hot raw fire in the same sets. The transforming features in this set are also very fun. I would say this is the most menacing looking vehicle in the entire LEGO Nexo Knights theme. Just love it! Oh, and to make this set even better, it also comes with a hover-horse! Here is the official description: Tower over the enemy with the monstrous Siege Machine of Doom! General Magmar is seeking the Book of Destruction to help Jestro create even more chaos in the realm of Knighton. Charge Clay Moorington into battle on his Hover Horse to stop him, and dodge the flying Globlins. Zoom in to attack General Magmar and Flama, but watch out when the fearsome 2-in-1 machine rises off the ground and turns into a monstrous siege tower! Includes scannable shields for 3 Nexo Powers: Giant Growth, Storm Dragon and Dynamighty. Includes 3 minifigures: General Magmar, Flama and Clay Moorington. 516 pieces. Price: $49.99 – BUY HERE 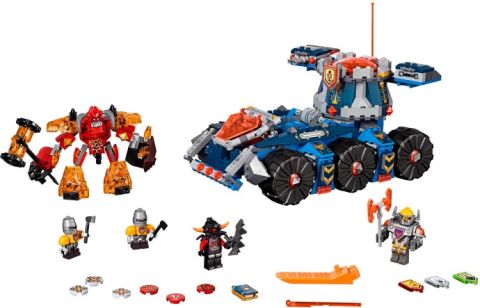 ➡ #70322 LEGO NEXO KNIGHTS AXL’S TOWER CARRIER: This is another really excellent mid-size LEGO Nexo Knights set. It kind of looks like a moon-rover, and I don’t think it would take much to make it into purely LEGO Space set. It is also clever how the vehicle can drop off the tower (see video-review below for details). And the lava-monster is awesome. Here is the official description: Protect the spell book from Burnzie in Axl’s Tower Carrier! Detach the Tower Carrier’s turret, then roll it into battle against Burnzie. Fire its missile launchers and disc shooter, and use the Tower Carrier’s hidden catapult to stop the monsters advancing and finding the secret storage vault! Don’t forget to send the Axl Bots on repair duty after Burnzie’s finished with his disc shooter and mighty hammer. Includes scannable shields for 4 Nexo Powers: Rock Throw, Incinerate, Stone Stun and Force Field. Includes 4 minifigures: Axl, 2 Axl Bots and an Ash Attacker, plus a buildable Burnzie big figure. 670 pieces. Price: $69.99 – BUY HERE 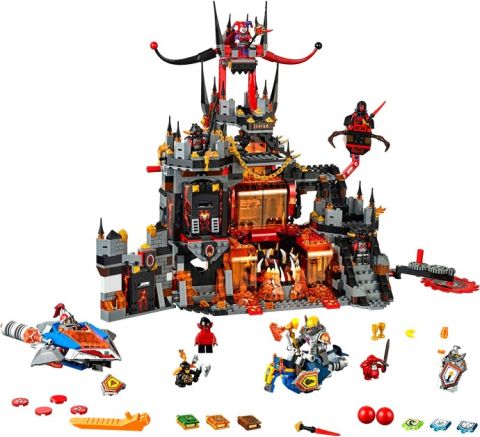 ➡ #70323 LEGO NEXO KNIGHTS JESTRO’S VOLCANO LAIR: The biggest ultimate LEGO Nexo Knights set to date! It is massive, with enough lava to burn down the entire kingdom! A very impressive set in every way. It is best to see this set in person to really appreciate all the features, so I suggest that you watch the video-review below. Here is the official description: Invade Jestro’s secret hideaway and capture the Book of Monsters! Fly in the Mace Slammer, blast open the library and take back the books of dark magic. Send Axl in on his Hover Horse, but watch out for the trapdoor with spinning lava mouth, and evade the flying Globlins! Take Jestro and his army by surprise as he relaxes in the living quarters, and stop him escaping on his detachable throne! Includes scannable shields for 6 Nexo Powers: Flash Cannon, Fire Tornado, Wall Block, Banana Bomb, Jungle Dragon and Whirl Wind. Includes 8 minifigures: Jestro, Bookkeeper, Lavaria, 2 Ash Attackers, Axl, Macy Halbert and Lance Richmond, plus 2 Scurriers. Jestro’s Volcano Lair measures over 12” (33cm) high, 16” (41cm) wide and 11” (28cm) deep. 1186 pieces. Price: $119.99 – BUY HERE 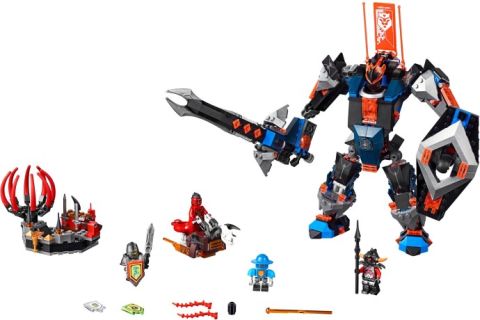 ➡ #70326 LEGO NEXO KNIGHTS THE BLACK KNIGHT MECH: This set is a perfect match to the previously released #70327 LEGO Nexo Knights The King’s Mech, although I should point out that it is much taller, which creates some very interesting David vs. Goliath dynamics between the two. In the video-review below you can see some comparison views between the two. Here is the official description: Arise Black Knight Mech and defeat Whiparella! Can Robin Underwood’s futuristic invention defend the castle against Whiparella and the Ash Attacker until the knights return? Wield the gigantic sword or launch a surprise attack with the shield’s arrow shooter, but watch out for Whiparella’s catapult and evade capture in her claw-like prison. Includes scannable shields for 3 Nexo Powers: Foul Steam, Spirit Vortex and Venom Bite. Includes 4 minifigures: Robin Underwood, a King’s Bot, Whiparella and an Ash Attacker. The Black Knight Mech measures stands over 12” (31cm) tall. 530 pieces. Price: $39.99 – BUY HERE

As you can see there are plenty of sets to choose from – maybe even a bit too many? It takes a bit to figure out which one you might like the most. Personally I like the mid-price sets the most – they are substantial in size, include interesting transforming features, come with lots of great parts and unique colors, and offer plenty of play-value. Although I have to say that the LEGO Nexo Knights Jestro’s Volcano Lair is definitely a beautifully evil and very impressive set. The smaller sets might be a good option if you are only looking for some of the interesting new parts. There is something for everyone in this theme! You can find both the previous sets and the new ones under the LEGO Nexo Knights section of the Online LEGO Shop. 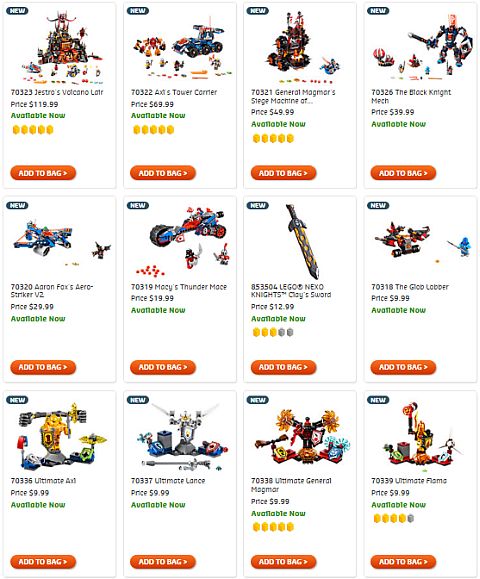 So what do you think? How do you like the new LEGO Nexo Knights sets? Did you get any of them already? Feel free to share your own thoughts and review in the comment section below! 😉