A number of much talked about LEGO Super Heroes sets were released at the beginning of the month; five for Marvel fans, and three for DC Super Heroes fans. Today we will look at each of the sets more closely to help you decide if you would like to get them. 🙂 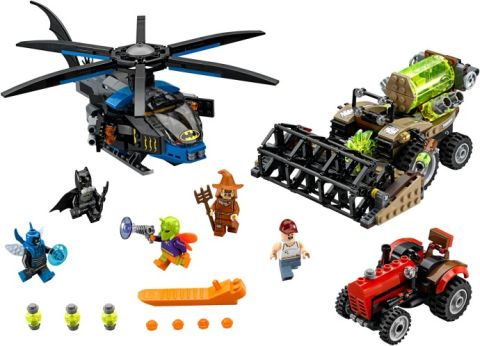 ➡ #76054 LEGO BATMAN SCARECROW HARVEST OF FEAR: This is probably the most interesting LEGO Super Heroes sets of the year. You get three very interesting vehicles that are fun in themselves (just look at that sweet red tractor!), and the minifigures are very unique. Really nice to see such a great collection in a mid-price LEGO set! Here is the official description: Help Batman rescue the farmer from Scarecrow and Killer Moth! Gas Mask Batman and Blue Beetle are racing to help the frightened farmer in the Batcopter. Shoot the harvester before it mows down the tractor—but watch out for Scarecrow’s fear gas stud shooter! Stage an aerial battle with Blue Beetle and swat Killer Moth out of the sky! Stop the criminals imprisoning the farmer in the harvester’s fear gas tank and spreading fear to the rest of Gotham City. Includes 5 minifigures: Gas Mask Batman, Blue Beetle, Scarecrow, Killer Moth and a farmer. Batcopter measures over 3” (10cm) high, 12” (31cm) long and 9” (24cm) wide. Scarecrow’s harvester measures over 3” (8cm) high, 7” (20cm) long and 5”(13cm) wide. Tractor measures over 1” (4cm) high, 3” (8cm) long and 2” (6cm) wide. 563 pieces. Price: $59.99 – BUY HERE 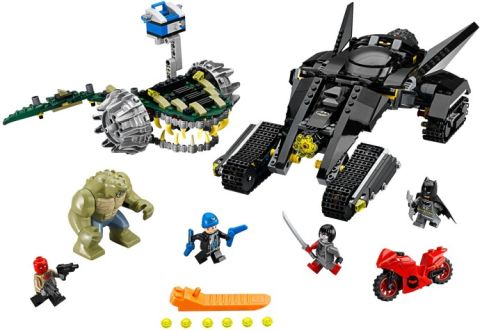 ➡ #76055 LEGO BATMAN KILLER CROC SEWER SMASH: Yep, that’s a Killer Croc bigfig! Also, a number of other new Super Heroes minifigures. I’m not so fond of the Batman’s tank, but it does have some cool features. Here is the official description of the set: Bite back against Killer Croc with the Bat-Tank! Reinforcements have arrived! Help Red Hood and Katana stop the monstrous Killer Croc and evil Captain Boomerang from destroying Gotham City. Charge Killer Croc’s Battle Chomper with Batman’s Bat-Tank. Crush the heavily armored vehicle with the Bat-Tank’s powerful ram weapon, but don’t get bashed by the swishing tail or fall into the giant jaws. Crush the foes with super heroes teamwork and stop the evildoers once and for all! Includes 4 minifigures: Batman, Red Hood, Captain Boomerang and Katana, plus Killer Croc big figure. Bat-Tank measures over 3” (9cm) high, 11” (29cm) long and 6” (17cm) wide. Killer Croc’s Chomper measures over 3” (10cm) high, 10” (27cm) long and 6” (16cm) wide. 759 pieces. Price: $79.99 – BUY HERE 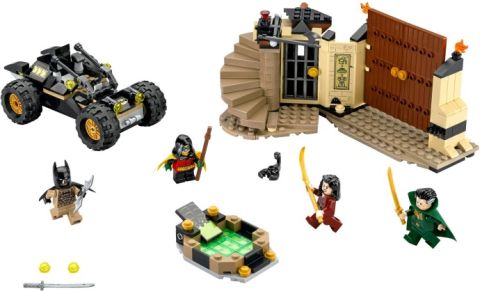 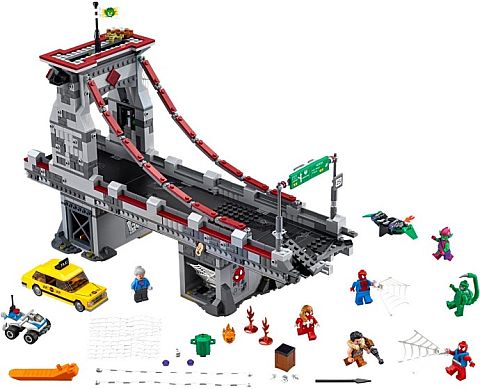 ➡ #76057 LEGO SPIDER-MAN: WEB WARRIORS ULTIMATE BRIDGE BATTLE: This has been one of the most anticipated sets of the year ever since it was first revealed at the toy fairs. The minifigs and the action features are great of course, but what really caught the attention of LEGO fans is the bridge itself. It is rare to see such a substantial structure in a regular LEGO set, and this bridge is definitely well detailed. Buying two to create a full bridge is an obvious choice, and something LEGO themselves recommends in the description. And while the bridge is full of action-features, they don’t take away from the overall impressive look. With some slight modifications this bridge could work in any LEGO City setting. Make sure you watch JANGBRiCKS’ review in the video-player below, as this set is full of surprises. Here is the official description of the set: Swing into a bridge battle zone and save the day! The bridge is under attack! Team up Spider-Man, Spider-Girl and Scarlet Spider to defeat Green Goblin. But beware Kraven the Hunter crawling out of his secret lair, and watch out for Scorpion’s venomous tail. Rescue the taxi with a web before it plunges off the roadway, and protect Aunt May from Green Goblin’s flaming pumpkin bomb—then round up all the villains in a web prison! Includes 7 minifigures: Spider-Man, Spider-Girl, Scarlet Spider, Green Goblin, Scorpion, Kraven the Hunter and Aunt May. Bridge measures over 12” (33cm) high, 5” (13cm) wide and 17” (44cm) deep. 1092 pieces. Price: $99.99 – BUY HERE 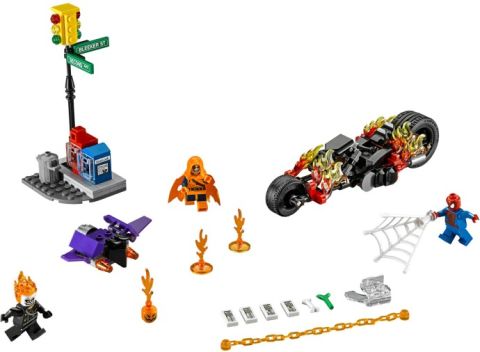 ➡ #76058 LEGO SPIDER-MAN: GHOST RIDER TEAM-UP: This is one of the smallest sets amongst the new releases, but it still comes with unique minifigures, and a really good looking bike with awesome flame pieces. But my favorite feature is actually the newspaper boxes and the street sign – nice little details! Here is the official description of the set: Keep the streets of New York safe and defeat Hobgoblin! Hobgoblin is causing chaos in the city with his Goblin Glider and flaming pumpkin bomb, so send in Spider-Man and Ghost Rider for a street battle! Ride the Ghost Rider Bike at full throttle and use his fire chain to stop the demon. Then topple Hobgoblin from the top of the traffic lights with Spider-Man’s Super Jumper! Includes 3 minifigures: Spider-Man, Hobgoblin and Ghost Rider. Ghost Rider Bike measures over 1” (4cm) high, 6” (17cm) long and 1” (5cm) wide. 217 pieces. Price: $19.99 – BUY HERE 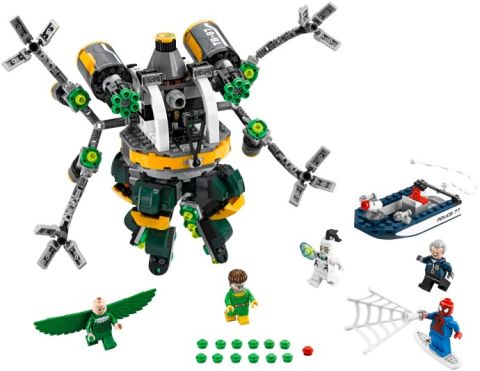 ➡ #76059 LEGO SPIDER-MAN: DOC OCK’S TENTACLE TRAP: This set comes with a very interesting bot and a number of unique minifigures. Make sure you check out the video-review below to see the action-features! Here is the official description: Rescue White Tiger from the Octo-Bot’s slippery tentacles! Doc Ock is wading through the water in his weaponized Octo-Bot and has taken White Tiger prisoner in one of the tentacles! Steer Captain Stacy’s speedboat with Spider-Man surfing in on his web surfboard tow and rescue her! Watch out for Vulture nosediving through the air and fend off his attacking claws, and make waves with a heroic rescue. Includes 5 minifigures: Spider-Man, Doc Ock, Vulture, White Tiger and Captain Stacy. Doc Ock’s Octo-Bot measures over 7” (19cm) high, 10” (27cm) wide and 5” (13cm) deep. 446 pieces. Price: $39.99 – BUY HERE 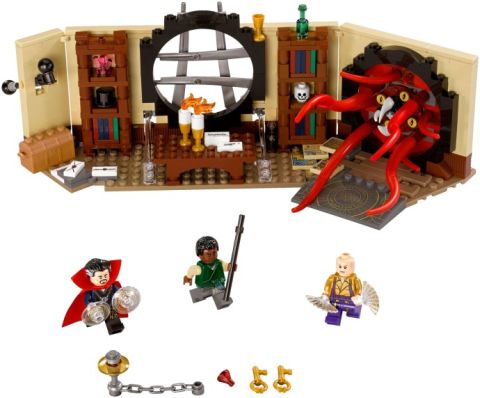 ➡ #76060 LEGO DOCTOR STRANGE’S SANCTUM SANCTORUM: This is another much talked about set with some really great details. Lots of nicely printed elements, and this is the first time I have seen LEGO use that candle design! And that portal beast is awesome! Here is the official description of the set: Banish the portal beast from Doctor Strange’s Sanctum Sanctorum! Team up and expel the portal beast from Doctor Strange’s mysterious headquarters with some super-heroic supernatural action! Fend it off with Doctor Strange’s mystical artifacts, and evade being captured by the portal beast’s tentacles using the cape of levitation. Send in Karl Mordo to battle the beast with his quarterstaff, and help The Ancient One strike with the powerful magical fans at her fingertips! Includes 3 minifigures: Doctor Strange, Karl Mordo and The Ancient One. Sanctum Sanctorum measures over 4” (11cm) high, 12” (31cm) wide and 7” (18cm) deep. 358 pieces. Price: $29.99 – BUY HERE 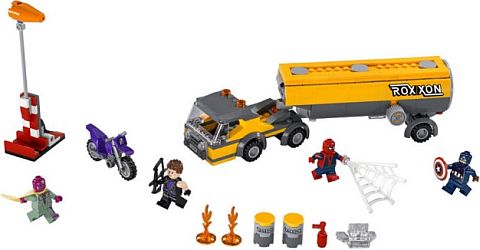 ➡ #76067 LEGO SUPER HEROES TANKER TRUCK TAKEDOWN: This set can be a great addition to the #76051 LEGO Super Hero Airport Battle to stage an even bigger encounter. Here is the official description: Jump to the rescue and control the blaze with the Avengers and Spider-Man! The airport battle continues between the divided Avengers. Pitch Captain America and Hawkeye against Spider-Man and Vision. Which duo will win as they battle it out around the exploding Roxxon tanker truck? Use the Super Jumper to fly into the air and put out the truck’s flames, or explode the barrels to stop Captain America advancing. Help Spider-Man use his web blast to defend himself against Hawkeye speeding at him on his motorbike. Includes 4 minifigures: Captain America, Spider-Man, Hawkeye and Vision. Tanker truck measures over 2” (7cm) high, 9” (25cm) long and 2” (7cm) wide. 330 pieces. Price: $29.99 – BUY HERE

I would say that this is a very strong wave for both Marvel and DC Comics LEGO sets. Previously LEGO got some criticism that their Super Heroes sets only focused on the unique minifigures, and the sets themselves were lackluster. This time however we are not just getting a great selection of brand new collectible characters, but most of the sets are also substantial and very interesting. Also, surprisingly, the prices are not bad at all! You can find all the new sets under the LEGO DC Super Heroes and the LEGO Marvel Super Heroes sections of the Online LEGO Shop. 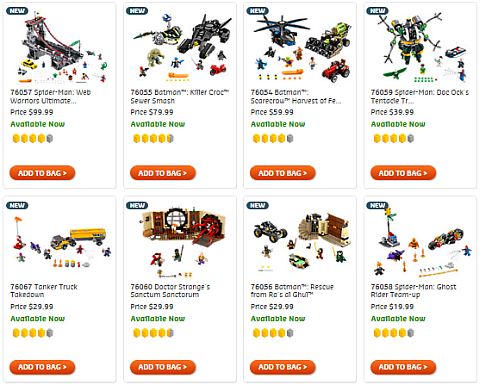 What do you think? How do you like the new LEGO Super Heroes sets? Do you have any favorites? Did you get any of them already? Feel free to share your own review and thoughts in the comment section below! 😉