Life then and now… thru the eyes of a minifig

Back in the spring, we featured the work of LEGO fan and model designer Elspeth De Montes with a collection of theatre scenes (see: Famous Theatre Scenes in LEGO). Today I wanted to show you another series of LEGO vignettes by Elspeth, titled Then and Now. The series was originally built for an article in Bricks magazine, highlighting the contrast between life in 1966 and 2016. I think you will like it. 🙂

Here is what Elspeth says about the series: “Meet Doris. On the left it’s 1966, and she is a young vibrant lady in touch with the latest fashion, technology and trends. On the right, time has passed and it is 2016 and Doris has to cope with new technology, innovation and the changes in society.” In the old days Doris could simply take her bag of trash outside to the one trashcan. Nowadays she is confused about the number of choices between all the different recycling bins. While I do own a few LEGO trashcans, I never realized it was available in so many colors! 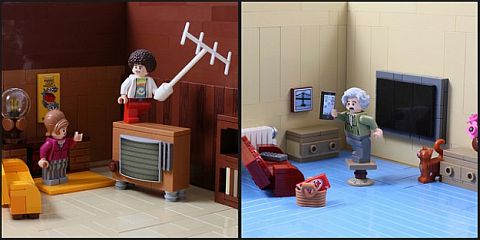 In 1966 people had to move antennas around to find that one sweet spot to get good reception on their televisions. In 2016 Doris is trying similar methods to get the bars up on her mobile phone. Take a look at all the well-designed furniture pieces!

Back in the days, the park was a place of tranquility, the laughter of children, picnics on the grass, and kites in the sky. In 2016 Doris looks on with concern as kids are riding Segways and operating drones. Notice the really nice landscaping techniques used in both scenes. 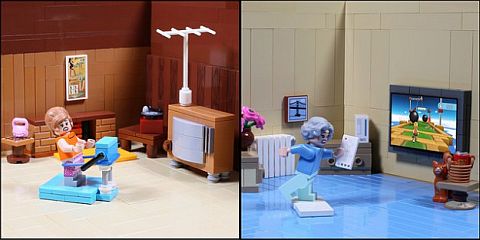 Elspeth says that in 1966 Doris was using a Vita-Master Vibration Belt Massager (I had to look that up as I had no idea what it was). I guess the loosing-weight-with-no-effort craze was well and alive even back then. In 2016 Doris is using a virtual obstacle-course to stay in shape. That’s probably more effective, isn’t it? And more fun too! She doesn’t seem to be particularly happy with either though. 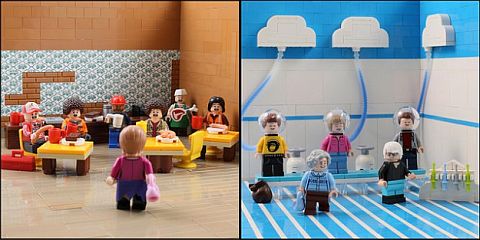 In the first scene, Robert Atkins had just announced that you could lose weight eating bacon, butter, sausages and steak and Doris decided to give this highly publicized new diet a try. Just as ridiculous is the Oxygen & Vitamin Shot diet in 2016. But diet fads never die. I’m jealous of how many of those new printed wallpaper bricks Elspeth got! 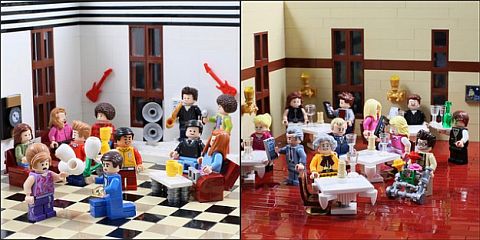 The last scene in the series shows Doris’ blind date woes back then and now. Elspeth writes: “In 1966 Doris felt that this new culture of blind dating was a high-risk gamble; it seemed that Frank was far more enthusiastic than his invitation to meet up for a coffee suggested. In 2016, Doris had finally relented and agreed to a blind date with Arthur after he promised to take her to a swanky restaurant and show her his new wheels – these were not exactly the wheels she envisioned.”

As you can see all of Elspeth’s scenes are characterized by excellent parts-usage, a clean design, and great story-telling in fairly simple scenes. It is worth studying the pictures to catch all the small details. If you would like to see more of Elspeth’s work, you can visit her flickr gallery for more.

What do you think? How do you like these LEGO vignettes? What other scenes you think could be added to the series to show the differences between life fifty years ago and now? Feel free to share your thoughts and ideas in the comment section below! 😉