As I mentioned previously (see links at the end of this post), I have been experimenting with some of the recent Mega Bloks Collectors series sets. One of the collections I really like is Teenage Mutant Ninja Turtles. The first wave of the Mega Bloks TMNT sets were released earlier this year (see: Mega Bloks Treasures for LEGO TMNT Fans), and the second wave became available after Comic-Con in San Diego. 🙂

I was particularly looking forward to the summer sets because it focused on the original Eastman and Laird black-and-white comics. Being true to the comics, the Mega Bloks figures are also black and white (with red bandanas) to make them look like they just jumped out of the pages. The 4×4 stud printed tiles are also black and white, with just a splash of red. (First wave of the famous turtles pictured below for comparison.) 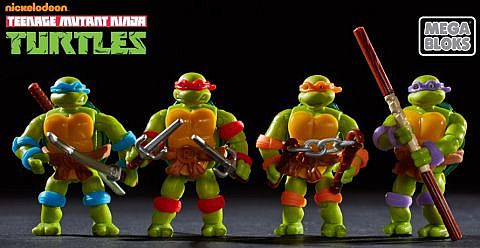 I mean, how cool is that? Mini action figures that look like drawings? I wish LEGO would have done something like this while they had the license! I would say though that Mega Bloks is more equipped to make such figures, because they regularly blend colors in their plastics for interesting effects. Anyhow, I couldn’t wait for the release! 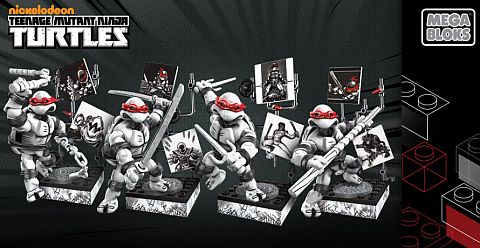 As soon as the TMNT Eastman and Laird Figure Packs became available I got all four of them. They are packaged exactly the same as the previous TMNT Classic Figure Packs, each including one turtle with weapons, one of those awesome piping pieces I showed you last time, and two printed 4×4 stud tiles with a picture from the comics. There is also a small, simple platform that serves as a stand. 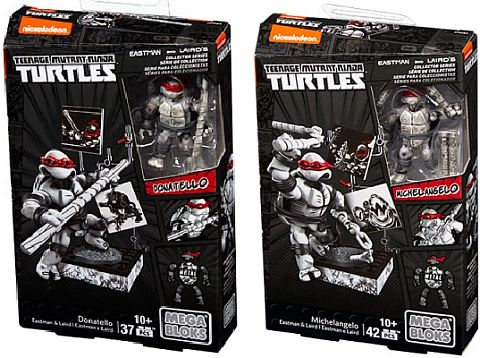 While the TMNT Eastman and Laird Figure Packs are very similar to the TMNT Classic Figure Packs, there are some differences also. The most obvious, of course, is that in the new packs everything is black and white and shades of gray to mimic the black-and-white comics. The pipes are dark-gray instead of copper, and interestingly, the manhole covers are not textured like last time, but printed. The bricks to build the small stand for each figure are also printed. The weapons are exactly the same as before, except they are all a blended color of grays. 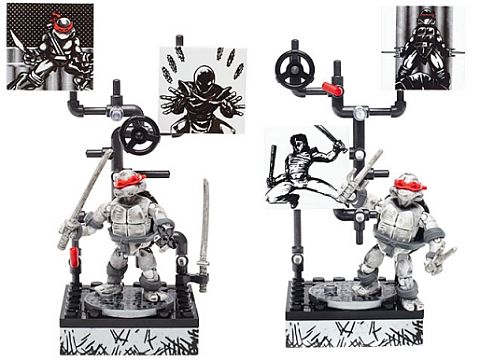 I really liked the mini action figures last time, and now I like them even more. The shades of gray blend together well to make the figures look like 3-D drawings. Just like in the last series, the turtle-shells are painted metal. The arm and leg-bands are removable, and are the same design as last time, except in gray. They are made of a soft, rubbery plastic. The headbands are red for all four turtles, and they are removable as well. The belts are a new design, and are the only thing I’m a little disappointed with. They are thinner than in the TMNT Classic Series, and don’t have little loops for the weapons, or the initials of the turtles. I’m concerned that they are so thin they might deteriorate like rubber-bands. While the four characters look very similar, as they are all the same color, they do have unique facial expressions. Also, the shell on their chest is shaped differently than in the TMNT Classic Series – it is more angular with deeper lines. 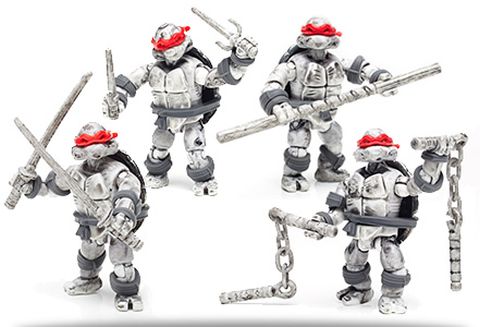 The reason I first started paying attention to these sets is because of the beautifully printed tiles. In the previous series they were all colorfully printed images from the comics, and this time they are black and white with a touch of red. They definitely look awesome, although I think they could have benefited from a bit of gray. Some of the images are a tad too dark. But I like them nonetheless as they offer interesting options for LEGO fans. 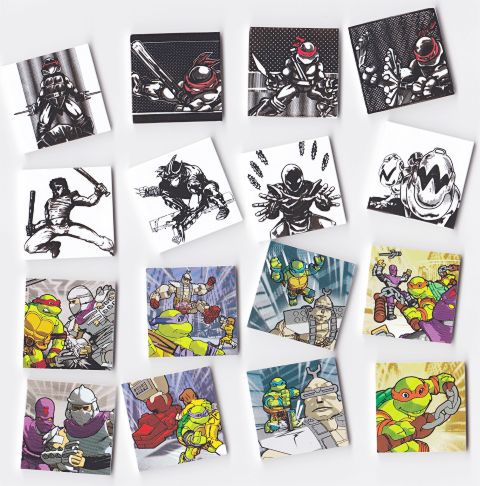 All in all, I’m super happy with both the Mega Bloks TMNT Classic Figure Packs, and the TMNT Eastman and Laird Figure Packs. I really like the turtles in both collections, as well as all of their accessories. And those pipes are some of my favorite pieces ever. They are great for adding interesting details and have pretty much unlimited attachment-points. I made a foldable stand to display all four characters in both versions. As LEGO and Mega Bloks are fully compatible and I don’t have very many building elements from Mega Bloks, I made the stand from LEGO. Below are a few pictures to show you how they look like together.

And there is more! While I knew about the release of the TMNT Eastman and Laird Figure Packs, as Mega Bloks revealed a preliminary image some time back, I had no idea there will be other sets as well. So it came as a pleasant surprise that they added two more very special sets to the TMNT Eastman and Laird Series: the Street Showdown and the Rooftop Combat. They are also made to look like black-and-white drawings with blended colors in the plastics and lots of printed pieces (all Mega Bloks sets in the Collectors lines are fully printed – no stickers). The only splash of color is on the signs. These are some of the most clever and artistic construction sets I have ever seen from any company. They are rad! 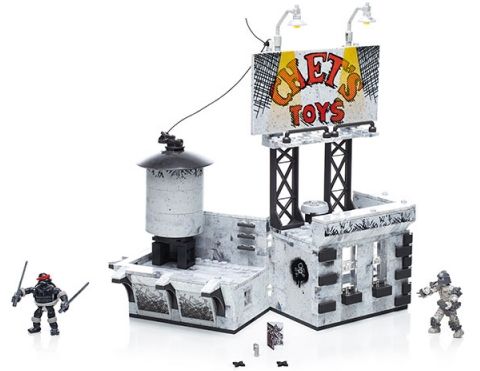 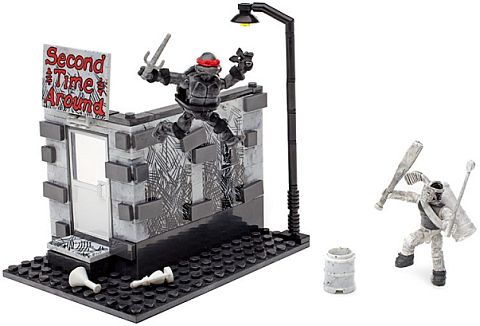 I know that most of you who are reading this are LEGO fans, and you may have never tried Mega Bloks before. I’m new to them as well, as I have shared in A LEGO Fan’s Encounters with Mega Bloks. While they have had the reputation of being not much more than an inferior imitator of LEGO, with their recent Collectors Series they seem to have found themselves a unique niche where they really excel. 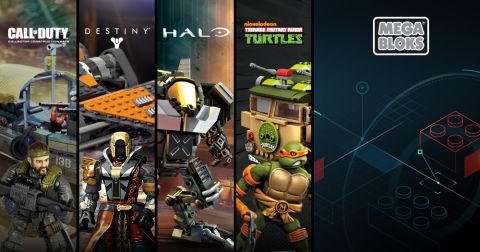 Unfortunately Mega Bloks doesn’t sell their sets via their own website, instead you will need to look for them at local retailers, or online. I found eBay to be a good place to find retired sets, and Amazon to get the new ones. Here is a link to the turtles I got: MEGA BLOKS COLLECTORS SERIES TMNT ON AMAZON

What do you think? How do you like my new turtles? Do you have any Mega Bloks sets? Are you collecting any of their themes? Feel free to share your thoughts and own review in the comment section below! 😉