LEGO fan Simon Pickard has been working on recreating a series of ancient board-games from LEGO. Projects like this are always very interesting, because it requires the builder to research the history of a particular subject, and it also introduces others to a subject they may have never heard about. Below are three of the board-games recreated in LEGO, and a bit of history behind them. 🙂

➡ LEGO BOARD-GAME LUDUS LATRUNCULORUM: Wikipedia says that Ludus Latrunculorum was a two-player strategy board game played throughout the Roman Empire. It is said to resemble chess or draughts, but is generally accepted to be a game of military tactics. Because of the paucity of sources, reconstruction of the game’s rules and basic structure is difficult, and therefore there are multiple interpretations of the available evidence (read more on Wikipedia). 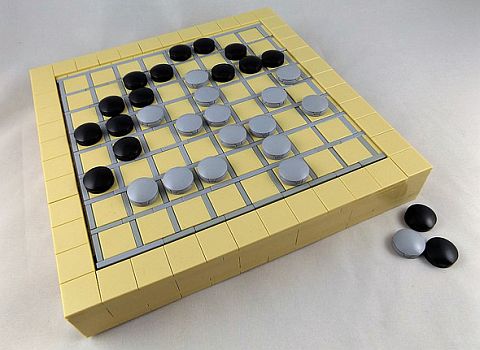 Simon writes that it is challenging to identify the correct size of the playing boards for this game, as it is often difficult for archaeologists to identify what a particular gridded board was used for. Boards with squares of 7×8, 8×8 and 9×10 were common across Roman Britain. The most plausible explanation is that the rules varied not only in the long timeline of the Roman Empire, but likely from one region to another as well. Simon also includes several versions of the possible rules of the game, theorized by different people based on ancient writings. It is quite interesting. You can read more on Simon’s flickr page. From the LEGO fan perspective, notice the cleanly designed board using sideways building techniques to achieve the thin lines of the grid.

➡ LEGO BOARD-GAME HNEFATAFL – According to Wikipedia, Tafl games are a family of ancient Germanic and Celtic strategy board-games played on a checkered or latticed gameboard with two armies of uneven numbers, and is also known as Viking chess (read more on Wikipedia). 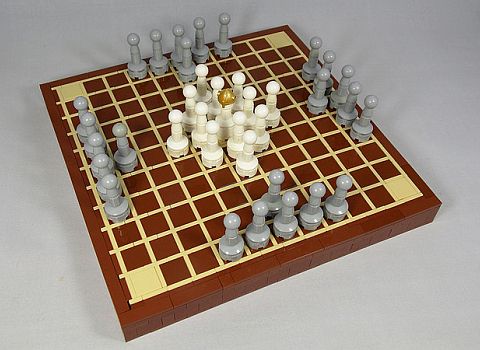 Although the size of the board and the number of pieces varied, all games involved a distinctive 2:1 ratio of pieces, with the lesser side having a king-piece that started in the center. No complete, unambiguous description of the rules of the game exists, but the king’s objective was to escape to the board’s periphery or corners, while the greater force’s objective was to capture him. Again, take a look at the cleanly built LEGO version of the board, and I really like the playing pieces also.

➡ LEGO BOARD-GAME MILLS – Wikipedia states that Mills is a strategy board game for two players dating at least to the Roman Empire. The game is also known as Nine Man Morris. The board consists of a grid with twenty-four intersections or points. Each player has nine pieces, usually colored black and white. Players try to form ‘mills’—three of their own men lined horizontally or vertically—allowing a player to remove an opponent’s man from the game. A player wins by reducing the opponent to two pieces (where he could no longer form mills and thus be unable to win), or by leaving him without a legal move (read more on Wikipedia). 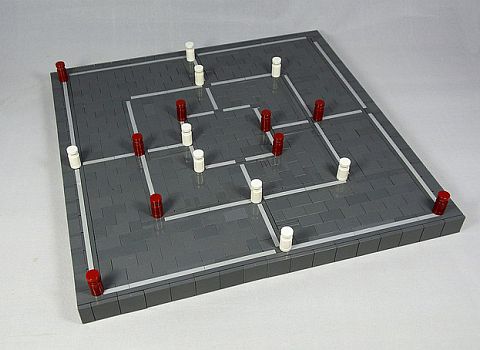 Simon adds that the game originated from the Vikings, but became popular amongst Anglo Saxon monks. While the board looks pretty simple with a dark-gray base color and white lines, to achieve the lines Simon had to use so pretty tricky sideways building techniques that you can see better if you examine the larger version of the image in Simon’s flickr gallery. 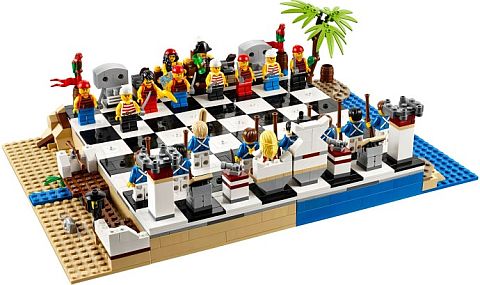 Even with so many electronic games, traditional board-games are still very popular, and recreating board-games from LEGO can even combine two great hobbies. While LEGO chess sets are fairly common, and even LEGO themselves released a number of them, there are plenty of other board-games that can be recreated in LEGO. Building games from LEGO bricks also allows for unlimited customization, so the game can evolve as much as you want.

What do you think? How do you like these LEGO board-games? What other traditional games you think would fit well with LEGO? Feel free to share your thoughts in the comment section below! 😉