As we discussed earlier this month (see press-release here: LEGO Creator Assembly Square Press-Release), the next set in the LEGO Modular Buildings line is going to be the #10255 LEGO Creator Assembly Square. This is a particularly special set in the collection, because it commemorates the 10th anniversary of the LEGO Modular Buildings, and because it is larger than any of the previous sets. Instead of having a 32×32 stud footprint, this set adds a 16×32 baseplate for a wider layout. 🙂 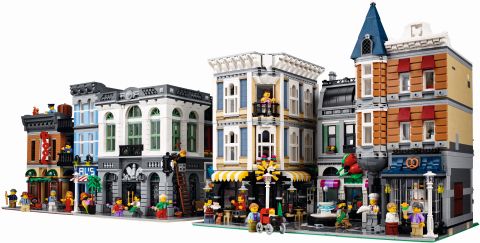 While it is perfectly fine to display the LEGO Modular Buildings as they are, if you are adventurous, you can modify them by making them bigger, changing the colors, and adding extra details both inside and outside. We have talked about modifications of the LEGO Modular Buildings previously, and I have included some links for you at the end of this post. Today we will focus on different layouts for the #10255 LEGO Creator Assembly Square with the help of one of my favorite town builders, Sjaak Lego. This set is especially interesting for modification because it includes three separate buildings, so there are more options for different configurations. 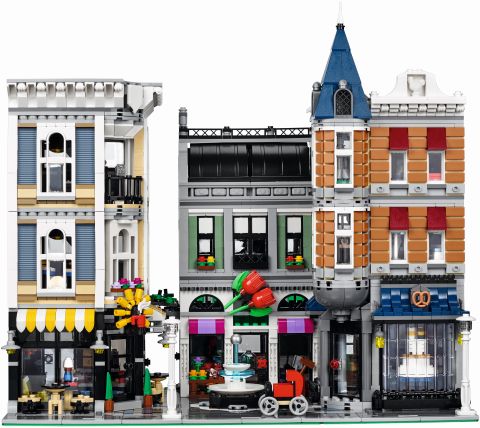 Sjaak Lego likes to expand the LEGO Modular Buildings by making them larger, and he initially uses Photoshop to work out different possibilities for his own LEGO town layout. The images really help to see what can be achieved with the LEGO Modular Buildings, and they might help with creating a plan for your own LEGO city. On the picture below you can see that the dark-orange and sand-green buildings were mirrored and put next to each other for a wider street view. This makes the bakery in the middle larger, or you could put two different shops in the space. And you can also replace the second flower shop with something else. I think the dark-orange building with the two towers looks really good this way. 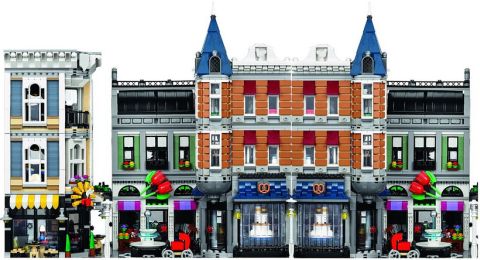 In the above configuration the sand-blue building was left as is, however you can certainly increase the size of it as well. Below, the building was doubled and mirrored to create larger apartments on the second and third floors, and the coffee shop now has two entries. 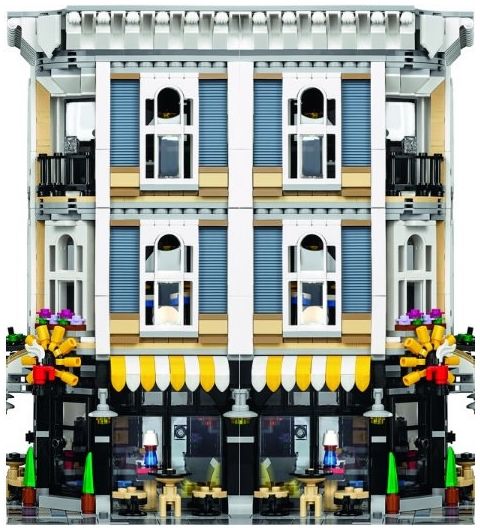 In the next picture, the entire set is mirrored and put next to each other, so now the sand-green building is in the middle. This makes the flower shop and the photo studio above it wider. The little plaza at the front is larger as well, so there is more room for a bigger fountain, outdoor seating, and for street vendors to set up their carts.

Now that a nice layout has been worked out, how about making the buildings taller? By adding an additional story to each of the buildings, the whole street looks more substantial with a more downtown-like vibe. 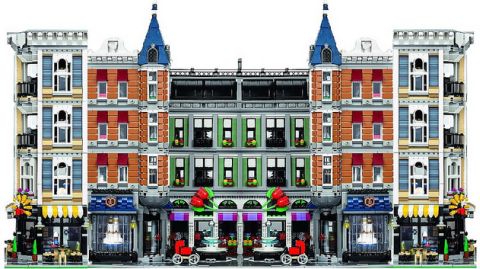 And what about making the buildings really-really tall for a high-rise condominium? You still have small shops at the bottom, and plenty of apartments for your minifigs to live in. Each of the living spaces could be furnished differently for a customized look. Very impressive, isn’t it? 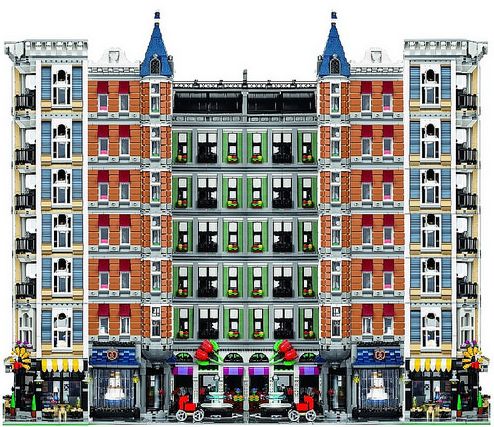 It is interesting to note that because the most recent LEGO Modular Buildings (#10251LEGO Creator Brick Bank, #10246 LEGO Creator Detective’s Office, #10255 LEGO Creator Assembly Square) are made up of smaller buildings, expanding them really creates a complete street feel. There is no need to get every single set in the collection to achieve that look, because you get several buildings in just a single set. It is also easier to customize each building because of the smaller size. So, while not everyone likes the smaller Modulars, overall I think they are more user-friendly and appeal to a wider audience. The LEGO Creator Assembly Square will be available in January next year, but you can check out the current selection under the LEGO Creator section of the Online LEGO Shop.

What do you think? How do you like the expanded version of the LEGO Creator Assembly Square? Are you planning to customize yours as well, or will just stay with the original layout? What other changes you think would look good with this set? Feel free to share your thoughts and discuss in the comment section below! 😉