Last week LEGO announced the review results of the projects that reached 10,000 supporters between January and May 2016. There were nine projects in this review period, and the result came to many LEGO fans as a pleasant and unexpected surprise. Below you will find the full announcement as well as some other details, so we can discuss. 🙂 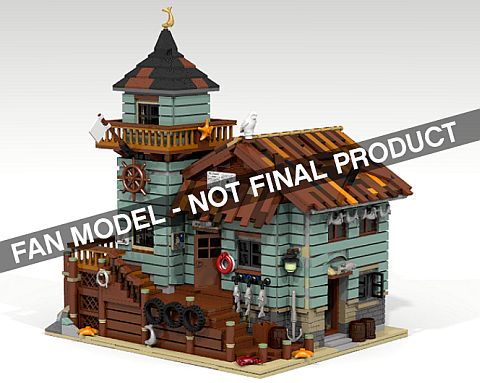 While the projects in this review period were all wonderful with many supporters, still, some had a better chance of being chosen as an official LEGO set than others. Most people expected the Fossil Museum, the Gingerbread House, or Johnny Five to be selected – based on the characteristics of previously released LEGO Ideas sets. The Old Fishing Store had lots of followers as well, however since the model comes with over 2000 elements, even fans were doubtful that it will be the winner. No LEGO Ideas set of this size was released before. 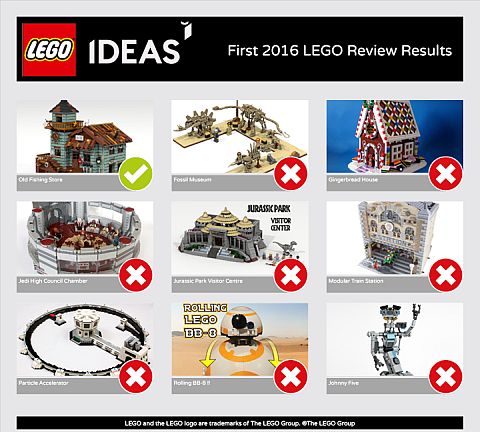 Here is the announcement from LEGO Ideas: Fishing has always been a central point in Robert Bontenbal’s life. This big passion, in combination with his day job as an architectural draughtsman, is what came together to create this beautiful model that is packed with lovely details and play opportunities. Its creative building style represents a unique design expression for LEGO houses that we’re all very excited about. We’re still working out the final product design, pricing and availably for the Old Fishing Store, so check back on LEGO Ideas in 2017 for details.

It is also interesting to note that Robert intended his model to be a series, which is discouraged per LEGO Ideas policy. He writes on his LEGO Ideas page: “My story for this modular building was that the Old Fishing Store is based upon the LEGO Christmas sets that are available. I liked the Christmas sets so I built this one on LEGO Digital Designer (LDD). I really believe that this model could have a lot of genuine interest to fans of Christmas sets. This is the first of a series of modular buildings that I will be making.” 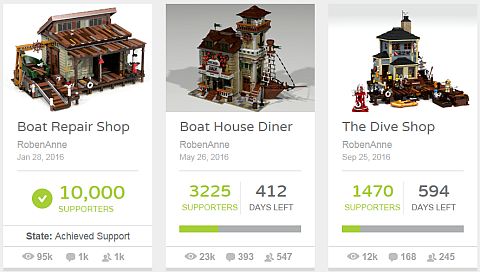 Since the submission of the Old Fishing Store, Robert also uploaded three other projects to LEGO Ideas, one of which already achieved 10,000 supporters, and the others are well on their way: the Boat Repair Shop, the Boat House Diner, and the Dive Shop. He also submitted some suggested add-on structures like a pier, and an alternate snow-covered Old Fishing Store. Robert is clearly an expert LEGO builder with a style that a lot of people really like and can relate to. The models perfectly capture the idyllic scene of a small fishing village in the style of the more detailed and realistic LEGO Modular Buildings Series. I’m curious to see if LEGO would consider adding the other buildings as well and make this into a collectible series – in spite of their current policies. 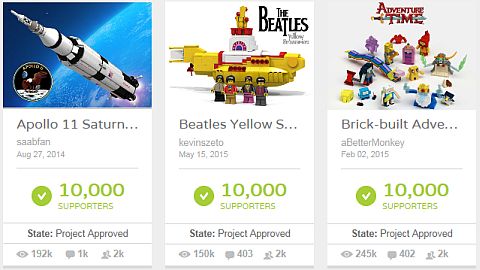 Also, remember that there are three upcoming LEGO Ideas sets from previous review periods that should be released fairly soon. The Beatles Yellow Submarine, the Brick-Built Adventure Time Figures, and the Apollo 11 Saturn-V (another unusually large model with over 1,000 pieces). 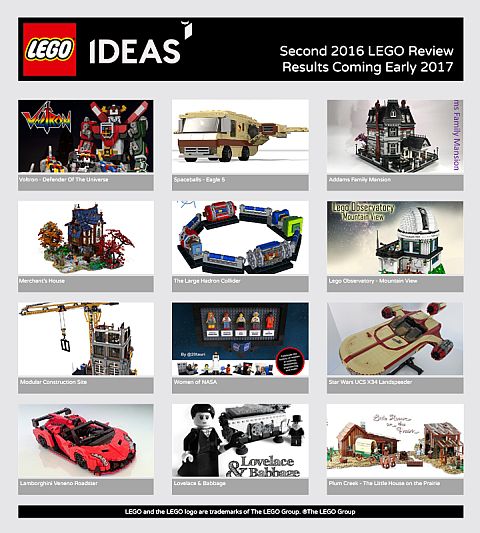 Also, the next batch of LEGO Ideas projects is already in review. These are the project that reached 10,000 supporters between May and September of this year. It is an unusually large review period with twelve submissions. Looking forward to seeing what LEGO decides. The results will be shared sometime in early 2017. And of course you can also check out the currently available LEGO Ideas sets originally submitted by LEGO fans at the LEGO Ideas section of the Online LEGO Shop. 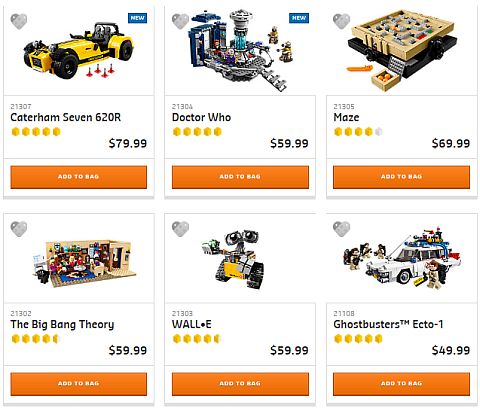 So what do you think of review results? Which projects did you vote for? And how do you like the Old Fishing Store? Are you planning to get it when it becomes available? Would you like to see other sets in this style? Feel free to share your thoughts in the comment section below! 😉