The recently released LEGO Rogue One: A Star Wars Story sets have been getting a lot of attention and praise. We have discussed the sets previously, but I thought it would also be a good idea to examine them in more detail. The Rogue One: A Star Wars Story film won’t be released until the end of the year, so we can’t really tell how accurate all the details are, however we can talk about the various functions, play-features and minifigures – which are always the highlight of LEGO Star Wars sets. 🙂

➡ #75152 LEGO STAR WARS IMPERIAL ASSAULT HOVERTANK: This smallish vehicle looks like a mix between a tank and a pick-up truck. Nothing fancy, but simple and functional, with plenty of firepower and hauling capacity. I would have liked another one of those orange crates though. Here is the official description: Help Chirrut battle the troopers patrolling the streets in their Imperial Assault Hovertank. With a rotating and elevating turret gun with dual spring-loaded shooters, elevating side guns, opening two-minifigure cockpit, storage container and ‘hover-look’ transparent wheels, the Imperial Assault Hovertank is the ultimate urban patrol vehicle. Includes 3 minifigures: Chirrut Îmwe with his fabric cloak and 2 Imperial Hovertank Pilots. Measures over 3” (8cm) high, 7” (20cm) long and 5” (14cm) wide. 385 pieces. Price: $29.99 – BUY HERE 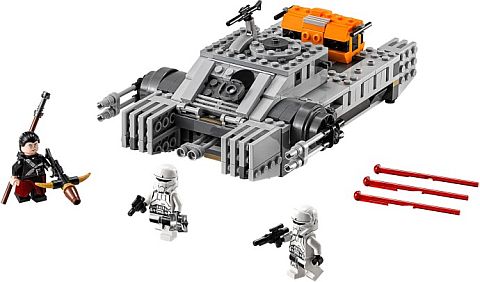 ➡ #75153 LEGO STAR WARS AT-ST WALKER: While this walker looks pretty good and is quite sturdy, it can’t really walk due to the rigid ankles. However the cockpit section can be turned around easily with a knob, which makes the set a lot more fun. I really like the minifigures as they are very detailed, but generic enough to use outside of the Star Wars universe. Here is the official description: Join the hunt for rebels aboard the AT-ST Walker, featuring posable legs, wheel-activated turning top section, opening cockpit and top hatch revealing a detailed minifigure interior, dual spring-loaded shooters and elevating guns at the front. Includes 3 minifigures: an AT-ST Driver, Baze Malbus with his heavy blaster and a Rebel Trooper. Measures over 9” (24cm) high, 6” (16cm) long and 5” (13cm) wide. 449 pieces. Price: $39.99 – BUY HERE 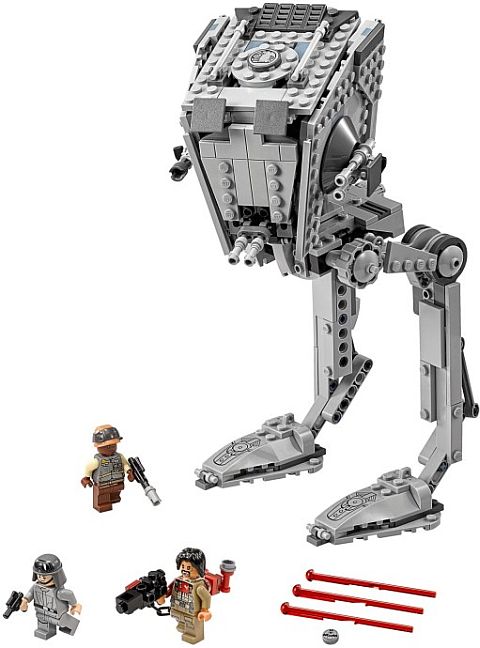 ➡ #75154 LEGO STAR WARS TIE STRIKER: The shaping and color combination of this ship is really elegant. It especially looks good from the front and the top. And it is very swooshable too! Make sure you check out the video-review below to see all the details. Here is the official description: Play out iconic sky battles with the amazing TIE Striker. With large adjustable wings, minifigure cockpit with top and front access, an opening rear storage hold and dual spring-loaded shooters at the front, this amazing model is the perfect opponent for any rebel starfighter. Includes 4 minifigures: TIE Pilot, Imperial ground crew, Imperial Shoretrooper and a Rebel Trooper in Endor outfit. Measures over 2” (6cm) high, 16” (41cm) long and 9” (24cm) wide. 543 pieces. Price: $69.99 – BUY HERE 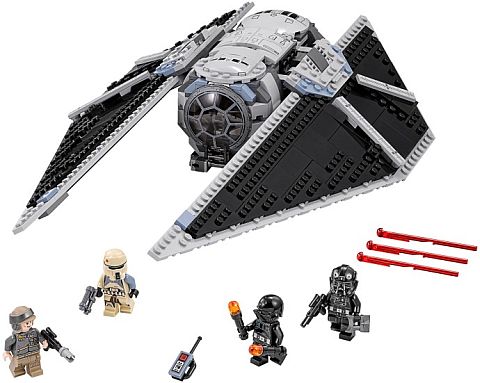 ➡ #75155 LEGO STAR WARS REBEL U-WING FIGHTER: This is the most unusual looking ship in the Star Wars: Rouge One collection, both in color and in design. It is a combination of a graceful glider with long, thin wings, and a chunky transporter. It is also interesting to see how much the shape changes when the wings are opened vs. folded in. In the video-review below JANGBRiCKS will show you all the features and functions. There are definitely a lot of surprising details. The amazing U-Wing Fighter has all the details you would expect from an authentic Star Wars model, including 4 big engines, an opening minifigure cockpit with transparent lower observation window, opening side doors with pull-out stud shooters, dual spring-loaded shooters at the front, rear storage hold and huge wings that sweep back to create an even bigger model. Includes 5 minifigures: a U-wing Pilot, Bistan, Jyn Erso, Cassian Andor and a Rebel Trooper. Measures over 3” (10cm) high, 17” (44cm) long and 7” (20cm) wide with wings closed, and over 14” (38cm) long and 25” (64cm) wide with wings open. 659 pieces. Price: $79.99 – BUY HERE 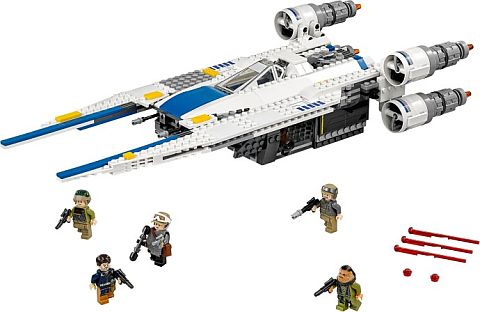 ➡ #75156 LEGO STAR WARS KRENNIC’S IMPERIAL SHUTTLE: The first thing you will notice about this shuttle is that this time LEGO made the wings foldable (compared to the #750094 LEGO Star Wars Imperial Shuttle Tydirium – a similar ship with fixed wings), plus it is black, which makes it look more evil and awesome. It is very interesting to see how the body of the shuttle opens up, so make sure you check the video-review below. Here is the official description: Krennic’s Imperial Shuttle is an intimidating Imperial starship. Featuring huge folding wings and opening front and side panels, this amazing model also has an opening minifigure cockpit, detailed hold with seating for 4 minifigures, a rear ramp with blaster storage, dual spring-loaded shooters and retractable landing skids. Recreate epic space battles from the epic movie, Star Wars: Rogue One, or create your own. Includes 5 minifigures: Pao, Director Krennic, Bodhi Rook and 2 Imperial Death Troopers, plus a K-2SO. Measures over 17” (45cm) high, 9” (25cm) long and 22” (56cm) wide in flying mode, and over 12” (33cm) high, and 7” (18cm) wide in landing mode. 863 pieces. Price: $89.99 – BUY HERE 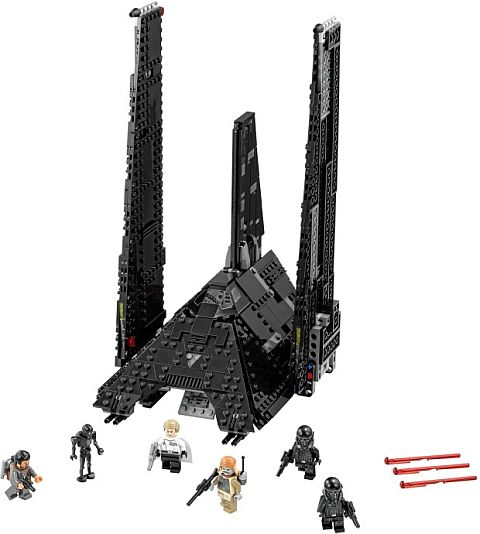 Besides these regular sets, there are also three large action figures related to Rogue One: A Star Wars Story. LEGO has been continuing to improve these large characters with better shaping and articulation, so even if you didn’t like them before, you might take a second look. The set names and numbers are as follows, and the video-reviews are in the player below: #75119 Lego Star Wars Sergeant Jyn Erso, #75120 Lego Star Wars K-2so, and #75121 Lego Star Wars Imperial Death Trooper. They are $24.99 each. 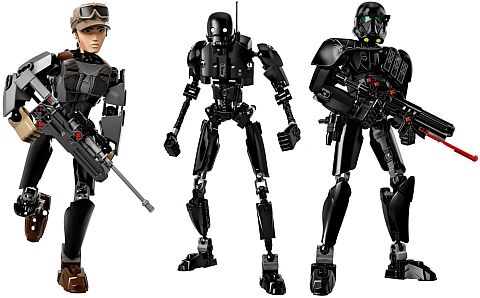 In the video-player below I have included reviews of all the LEGO Rogue One: A Star War Story sets by JANGBRiCKS. You can use the drop-down list in the upper left corner of the player to select the review you would like to see, or just watch them all in sequence. Especially with complex sets like LEGO Star Wars, video-reviews can be very helpful.

The LEGO Rogue One: A Star Wars Story sets have been well received and much appreciated by LEGO Star Wars fans. Minifigure collectors are also happy with all the unique and/or updated characters. Now all we have to do is wait for the movie to come out to see all these awesome Star Wars heroes, villains and vehicles in action! You can find all the sets at the LEGO Star Wars section of the Online LEGO Shop. 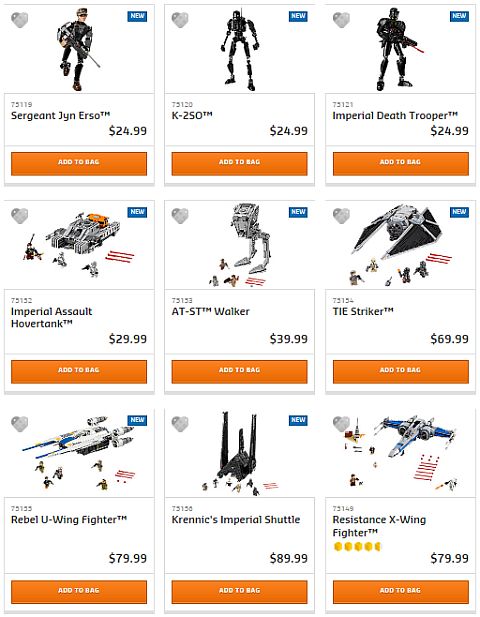 So what do you think? How do you like the LEGO Rogue One: A Star Wars Story sets? Do you have a favorite? Are you planning to get any of them? Are you looking forward to the movie? Feel free to share your thoughts and discuss in the comment section below! 😉